TFC And The Race For The Wooden Spoon 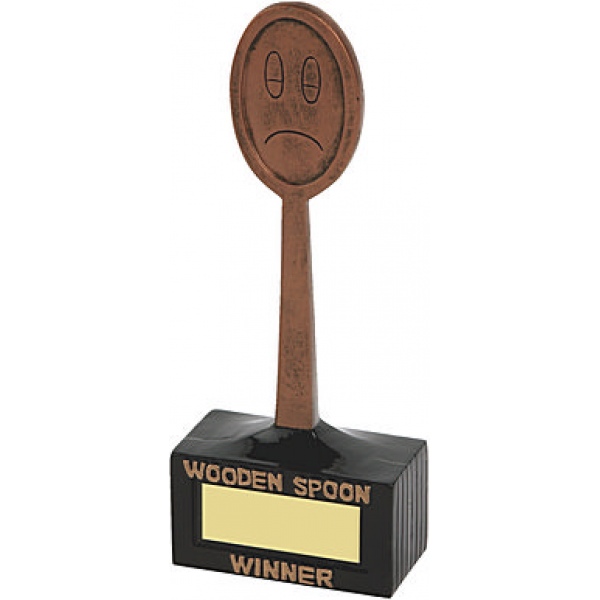 rt this post by saying that to me personally the Wooden Spoon is not a big deal. I will not be cheering any less for TFC going forward if they win the Wooden Spoon or not. I will be renewing my season tickets when the time comes and will be happy to do so no matter how this season turns out over the next eight weeks remaining.

And what is the ‘Wooden Spoon” you might be asking?

Simply put it is the “award” given to the MLS club that finishes last overall in the standings at the end of the season. And as it stands today there is a chance that TFC might end up with this dubious award that they last won in 2007. As the standings sit today just after the Labour Day weekend there are five clubs that probably have the best chance to end up finishing last. They are Chicago, New England, San Jose, Vancouver or our beloved Toronto FC.

Finishing last gives the winner of the Wooden Spoon of course the second pick overall in the MLS SuperDraft next season (Montreal gets the first pick I believe as a 2012 expansion team) and of course a healthy dose of “you suck” allocation money from MLS that can be spent on either new players or used to give players you wish to keep hold of a raise. And the lower you finish the more “you suck” cash you end up getting.

Yes there are some advantages I guess to TFC finishing at the bottom of the league if you boil it right down. And with the chance at the season’s end to perhaps finally clear out the last of Mo Johnston’s contractual errors the Reds might be in real good shape fiscally going into 2012 for perhaps the first time since season one. And the draft next season looks today to be a pretty solid one by MLS standards. American soccer pundit Ives Galarcep stated recently on his Fox Soccer blog that he believes that this draft class upcoming next winter is probably even stronger than it has been in recent years. And of course the higher the pick the better the potential player you get in return.

But all is not popcorn and sunshine.

Finishing last makes the job that Toronto FC has in this market that much harder. Without a doubt some of the zeal and passion in the stands at BMO Field has been sucked out of the ground based on the results on the field. I hear many anecdotes from fellow fans who lament that they have a harder time to sell or even give away extra tickets they might find themselves having. Attendance at the stadium for MLS games (actual attendance, not “announced” attendance) is undoubtedly down and getting it to increase over the off season when the product on offer is a last place club that has never played a playoff game in five seasons will only make the task that much more difficult.

It is hard to sell progress when there is no progress to show in the results table to many of the more “casual” supporters. And if Vancouver beats Toronto in the standings in its inaugural season I would not be surprised to see a lot of column inches and video tape once the post mortems start mentioning this fact time after time after time. And that will only make the Wooden Spoon that much more of a millstone.

Below is a brief look at the remaining schedule of each club and where I think they will end up finishing once this season comes to an end.

The Fire have nine games remaining, including a weirdly scheduled friendly against Mexican side Club Deportivo Guadalajara next week. They also have a US Open Cup final to worry about against Seattle, which if they pull it off give them Champions League footy next season. In MLS they have seven games remaining with three of them at home. Only two of the matches remaining are against relatively poorer clubs. They still have trips to Salt Lake City, Washington DC and Houston to take before the season ends. Home games against New England and Chivas are just about must wins if they want to avoid the spoon.

The Revs do not have any distractions left this season. Eight games remain, four at home and four away, all in MLS. And it might all come down to their last game of the season, here in Toronto on October 22nd as to where they finish. This month they only have one home game and have three in a row in October before their trip to Toronto to end out their run. This month they face tough away games in Philly, Portland and a crucial game in Chicago. With only two wins since May and with home games against the likes of Columbus, Dallas and Seattle remaining the task is a huge one for Stevie Nicol.

Maybe its the “TFC curse” for Frank Yallop and the San Jose Earthquakes. Four former Reds reside on their roster and they have not exactly been kicking ass or taking names, or for that matter scoring goals. Nobody has. San Jose has scored nine goals since the end of June. Their last victory was a 2-1 win at home in July. Unfortunately that win was in a friendly with West Brom of the English Premier League! Of their eight games remaining only three are at home. They also have matches left to play versus Dallas, Seattle and Colorado among others. It might all come down to how many points they get this week against Chicago and whether FC Dallas has anything to play for on October 22nd, their last game of the season.

The wildcard here for the Vancouver Whitecaps is BC Place. Vancouver has eight games remaining and five of them are at home. Four of that five will be at the newly re-fitted/renovated BC place which is finally set to be re-opened after a complete overhaul including a retractable roof.  Whether this intangible  is enough to get them past opponents such as New York, LA, Seattle, RSL, Dallas, Colorado, DC United or Portland remains to be seen. They have more home games remaining than anyone else in the race for the bottom, but the opponents left on the docket are all in or near the playoffs. Its going to be a tough ask for Vancouver with far and away the toughest schedule remaining of any club still in for the Wooden Spoon.

Toronto has more total games remaining than any of their competitors for the spoon with ten, but only six of those matches are in MLS. And Toronto has trips to Mexico and Texas remaining in the CONCACAF Champions League remaining plus two more home games in that tournament as well. Of the six MLS games left on the docket the three away matches are against Columbus (and we all know how that has gone for TFC so far), Chivas USA and in Philadelphia versus the Union. Whether TFC can finally earn a road win this season is of course the question, with perhaps Chivas being their best chance to do so. At home the Reds face the Red Bulls, Colorado and their final match against New England on the last day of the season. It probably will come down to if TFC can finally pinch an away win and of course how much of an impact the Champion League matches will have on the MLS games.

Here is how I see it possibly ending this season based on games remaining, form, toughness of schedules and quality of remaining opponents.

Let us know what you think of my guess on how things will turn out at the bottom of MLS this season and what you think the implications would be for Toronto if they did indeed finish dead last. Your comments are always welcome and of course appreciated in this space.