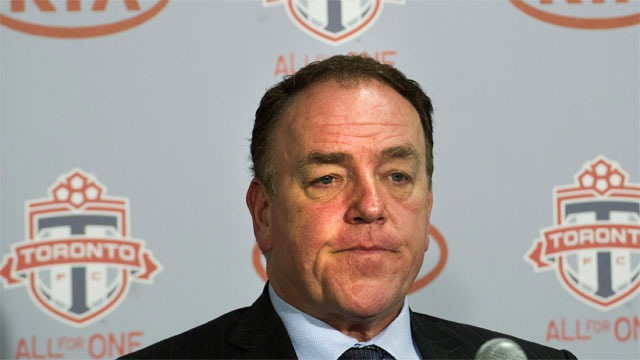 Six seasons of relative futility with only a few Voyageurs Cup and CONCACAF crumbs to sustain us.

A fan base that grew with early promise slowly eroding with each passing season.

Soon to be six seasons with no playoffs.

Roughly 130 players and counting have now passed through the revolving door that must be installed on the front of the BMO Field dressing room at this point.

Arguably, depending on the metrics you use, Toronto FC is on the aggregate the worst team in MLS over the past six seasons.

And only one constant at the top of the decision making tree exists since the club was founded. Mr. Tom Anselmi.

This is the Toronto FC I know. Tom Anselmi has been in charge since day one and one can argue that TFC is in as bad a shape today as it has ever been in. The playoffs are once again a pipe dream, and this is just about the earliest time on the annual calendar since 2007 that I think I can say that. A respected online sports statistical service stated that as of today Toronto FC has about a 0.3% chance of getting to the post season in 2012. And if current trends/patterns hold they have a 56.8% probability to win the wooden spoon which is emblematic of finishing dead last in Major League Soccer. And all of that is on the league’s third highest payroll, with a number of players dramatically over paid for the return the team is getting on the field in return.

There are still glaring holes all over the field and today the Director of Player Development, and now Head Coach, Paul Mariner tells us that he feels that he does not have a lot of depth on the roster to work

with after what he considers the starting eleven to be in his opinion and that he intends to essentially run his chosen eleven into the ground between now and October when this shambles of a season mercifully will come to an end. Was he not brought in last season to help provide the very depth of quality players into this side that he now laments not having?

The list of bad footballing decisions that this team has made since the start is of course a long one. Whether it be a long list of expensive flops (Robert, Teliby, Mista, Vitti, Ruiz… take your pick), letting the DeRo situation fester to the point that his leaving simply had to happen, whether it be bad trade after bad trade or silly contract after silly contract signed under a parsimonious MLS salary cap system, the list is long and inglorious of mistakes made and opportunities lost. And to make matters worse to see former Reds who have left for little to no return prosper elsewhere in MLS (Buddle, DeRo, Maicon Santos, Cronin, Wynne, Casey, Dunivant etc.) makes one ask how good players could not work out here but prosper elsewhere? What does it say about the people in charge of this team when seven players leave Toronto for next to no return in trades or allocation and then go on to win the MLS Cup?

All of these footballing decisions that were proven to be stupid upon stupid upon stupid were never ever called out by the powers to be at MLSE because the man at the top of the TFC organization has but a passing knowledge of this game and is more interested in using TFC as a springboard for his personal ambitions. And today’s announcement that Aron Winter was being replaced by Paul Mariner definitely spoke to that reality.

Why do this now? Why not a few weeks ago?

Why do this now when many supporters eyes were placed on Havana where Canada’s National Team plays Friday in World Cup Qualifying? Why do this when most casual fans of the sport are focused on the European Championship Tournament also kicking off Friday? And why wait this long into the International break to do this when it could have been done before the players left town? To me there is no other reason than Tom Anselmi wishing to bury this story as best as he could and the criticism he is sure to get from this state of affairs as far into the proverbial back pages as he possibly can.

Tom can read a results table. And I know he can read a spreadsheet. But he knows bugger all about footy.

That’s why Mo made the decisions he made without anyone to call him on them. That is why Coaches like Carver, Cummins and Preki were either hired or fired or given too much time or given too little time, depending upon your point of view. That’s why he had to rely upon a high priced consultant in Jürgen Klinsmann to choose a man in retrospect who might be looked at to have been out of his depth in Aron Winter to try and turn the club around.

A Team President who knows enough about soccer to know bullshit when he sees it has been the one thing this team has never had. And more  than any other single reason it is why the team is where it finds itself today. Everything else has been tried has it not? And when asked Thursday to comment about the frustration that fans are obviously feeling about the prospects for this team he snidely replied in a throw away remark that he only hired two of the seven coaches that the team has has in its six years of existence.

Anselmi has been Team President since Day One. Every hire on the business and on the soccer side has ultimately been his responsibility whether he actually interviewed the candidates or not. And ultimately he should be paying the price for the results on the field. But he is not. Only Aron Winter is.

It seems to me that Anselmi is more concerned with making sure that any stink from the TFC mess largely of his own creation does not get in his way of what he truly wants, namely the chance to soon take over from Richard Peddie as the head honcho of Maple Leaf Sports & Entertainment. And with the Rogers/Bell ownership group soon to take charge Anselmi can say to them after the firing of Winter that he is taking action to get the soccer business straightened out.

I for one hopes he gets his job. Then he can give up the job at Toronto FC that he has been an abject failure at and focus on his spreadsheets and on getting his new corporate overlords the profits they want. Hopefully then TFC can have a President at the helm that knows enough about the sport to make sure that they try and learn from the mistakes of the past instead of repeating them over and over again.

If Anselmi has been able to survive the six years of dreck that has been Toronto FC and still have a job the only way he will ever leave is if he gets promoted.