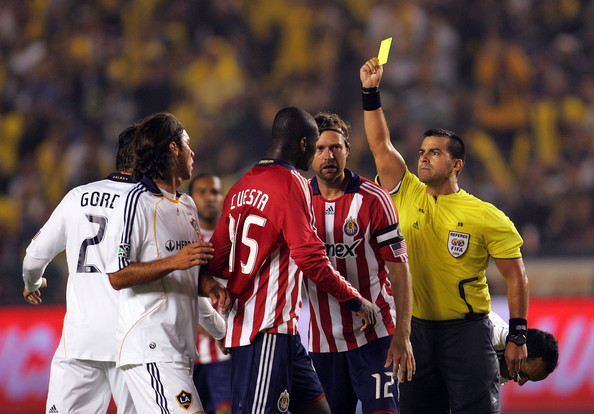 2:00 PM. TFC announced minutes ago that they have signed former Chivas striker Maicon (no not “that” Maicon) to a deal and he will be available for selection for tomorrow. Preki signed him in 2009 and he was just released by the goats. Go to www.torontofc.ca for more details on this signing. As well in an online pre-game chat TFC’s Luke Wileman, when asked directly by yours truly, would neither confirm nor deny that Mista is on a DP contract. 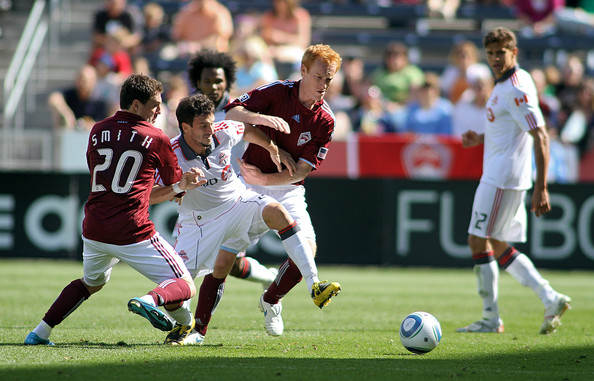 The bottom line to me at least is clear. Tomorrow’s match is pivotal in my eyes as a barometer for how well Toronto FC is going to do for the rest of this season. Lost points at home in a league where road points are historically so hard to come by is no longer a luxury TFC can afford. MLS standings historically tighten up as the season wears on and clubs that have been behind TFC in the results to date this year are starting to get their acts together. And once again tomorrow the club faces some adversity with Designated Player Julian De Guzman suspended and recently signed Spanish forward Mista not able to play until next weekend after the International Transfer Window opens up. Toronto has been a smoggy humid oven all week and the players have had to deal with preparing for a physical opponent in tough training conditions. Tomorrow’s noon kickoff can mean that player routine and preparation for the game may be thrown off as well. Add to that the pressure they place on themselves as a club for dropping home points at Fortress BMO. The last three home games have seen Toronto of course display fine defensive form, yet six out of a possible nine precious points have been dropped. A draw or loss is not acceptable if Toronto has any pretensions of becoming a playoff club this season.

Finding some way to prevent Conor Casey or Omar Cummings to score first will hopefully be a critical part of Preki’s game plan. This will be complicated with suspensions of Amadou Sanyang and Julian De Guzman. Midfield “destroyer” Martin Saric needs to come up with a huge game tomorrow in my eyes if TFC is to come away with the three points. Cann and Attakora will definitely need his defensive presence in order to keep Colorado off balance offensively. Striker Omar Cummings has speed to burn as well so Saric getting into the grill of Casey and midfielder Jeff Larentowicz to prevent them from getting anything to Cummings up top (or scoring themselves for that matter) in my eyes will be the key battle to keep an eye on tomorrow. And Saric needs to avoid picking up a red card from an official not shy in getting involved in the outcome of matches.

I took a look at some of the numbers to try and get a handle on what might be some of the more important trends and matchups that will in one way or another decide the outcome of the match. And frankly it looks like a real hard game to call.

– MLS Official Ricardo Salazar is scheduled to be the referee for the match tomorrow. In games he has officiated involving Toronto since 2007, the club has only won one, drawn two and lost three. Salazar, you may remember was the official in the earlier match this season in Colorado when he awarded multiple penalty kicks in a match TFC lost 3-1. Surprisingly TFC has won more games as a percentage when the reviled Balderomo Toledo officiates than when this Salazar character shows up.

– Overall Toronto is 4-3 lifetime against the Rapids. We have never drawn them home or away, so perhaps the likelihood of a draw tomorrow is starting to look smaller and smaller. Toronto has averaged almost 1.8 goals per game against Colorado since coming into the league. The Rapids have responded with a 1.3 goals per game average against Toronto home and away.

– When Toronto has scored first this season (six times this has happened) they have gone on to win five and draw one game. They have yet to lose this season when scoring first. When giving the opponent the first goal TFC has yet to come back and win a match, losing three and drawing one.

– Both clubs are averaging exactly 1.23 goals scored per game. Colorado has been tighter at the back than Toronto, only allowing 0.92 goals against versus TFC’s 1.15 per game result. Colorado has given up twice the number goals in the first half of games as in the second. Toronto’s numbers in this regard are exactly the opposite. TFC has allowed 15 goals against this season to date, with ten of them coming in the last 45 minutes of matches.

– Conor Casey of course had a cup of coffee with TFC in 2007 before The Ginger Glaswegian shipped him off to Denver. Marvell Wynne played 67 matches for Toronto before being traded to Colorado earlier this year. Five players on the Toronto roster played in Colorado at some point in their careers. Adrian Cann and Dan Gargan were with them a number of years ago. Ty Harden, Nick LaBrocca and Jacob Peterson all were with the Rapids in 2009. Familiarity may breed contempt in this match. Some disciplinary issues and scuffles often come from games where players want to do that little extra to prove their former club wrong.

-Toronto FC is unbeaten in ten games in all competitions dating back two months now when the club was defeated in Salt Lake City. Colorado has not lost in the league since dropping three points in LA against the Galaxy on May 5th.

Tomorrow will be a real challenge based on the fact that Toronto will be without Julian DeGuzman and Amadou Sanyang, plus the cavalry, in the form of Spanish striker Mista, is on the horizon but not here just yet. He can’t play for Toronto until the road game next weekend in Philadelphia against the Union. So TFC will have to rely upon some combination of De Rosario, White and Barrett up top to score goals against a side that has quietly become the 3rd best (statistically speaking anyways) defence in MLS.

So who wins? I have no idea. This matchup looks like one of the harder ones to predict an outcome for. Both clubs will be pressing for the three points to break their respective streak of draws, and based on past history both teams know each other very well. Players like Marvell Wynne and Nick LaBrocca for example are going to want to remind their former clubs of what could have been. With this in mind I think there will be some crunching tackles and hard play tomorrow and the TFC fan in me sees a 2-1 TFC win. See you all in the south end.