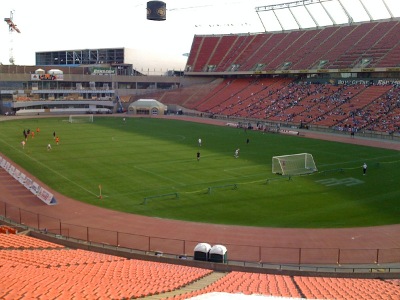 monton Sun newspaper today is confirming that new NASL franchise FC Edmonton will be playing Toronto FC on Wednesday April 27th in the first leg of a two leg semi final to decide one of two finalists for the Voyageurs Cup. The Sun is reporting that the match will be played at Edmonton’s Commonwealth Stadium on its new FieldTurf surface, with the return leg at BMO Field one week later on May 4th.

Here is the link to the report: http://tinyurl.com/63oc76u

No official word has yet come out from either Toronto FC or the Canadian Soccer Association confirming these dates. I have reached out to TFC for comment and Luke Wileman’s official response this morning was that they were “…(not) aware of any confirmation of dates for the tournament yet. That will come from the Canadian Soccer Association….”. The piece above states that FC Edmonton is expecting an official announcement from the Canadian Soccer Association that will confirm these dates in the next week. If this report is accurate this match in Edmonton will come four days after a huge home tie for TFC against rivals Columbus Crew and three days before a tough away match in Seattle against the Sounders. Flying to Edmonton then onto Seattle is again quite logical. The return leg a week later will be squeezed in three days before the Houston Dynamo come to BMO Field.

Without a doubt FC Edmonton will be huge underdogs in this tournament. Last season they played a number of exhibition games  only against the likes of FC Portmouth of England and Colo Coco of Chile, but they did not play in the NASL/USL like Montreal and Vancouver did. And they are only now formally launching their first official D2 campaign in 2011. Their official website today only lists ten players under contract so as far as a team goes they are definitely a work in progress. On top of that the club has already had to replace its coaching staff before kicking a  single ball in anger when the entire staff late last year left for jobs in Japan.

Looking at the FC Edmonton schedule there is a lot of logic in these dates being designated for the NCC as well. Edmonton plays in Carolina on April 20th and has its home opener at Foote Field (on the campus of the University of Alberta) with the Montreal Impact on May 1st. Having their first competitive game against TFC at Commonwealth Stadium, and then following it on with Montreal coming to town is likely the best possible means available for FC Edmonton to have a high visibility kickoff in their market. And if TFC is a big draw in Edmonton it will help the new club financially with a nice gate. Commonwealth Stadium has a capacity of  just a shade over 60,000 which is about seventeen times the capacity of Foote Field which can seat approximately 3,500 fans.

The plan here assumes that Vancouver and Montreal will have their home and away tilt perhaps in the same weeks as TFC/FC Edmonton do and the final will be a one off affair at BMO Field, home field of the 2011 champions. The winner of the Voyageurs Cup goes on to the CONCACAF Champions League group stage qualifying tournament where TFC could either draw the Seattle Sounders (US Open Cup Champs), the winner of the Nicaraguan league or the third place club from the Caribbean Football Union Championship in a home and home tournament to qualify for the group stages.

Notwithstanding a couple of minor spelling and content errors on the part of reporter Terry Jones(the spelling is “Nutralite”  and there is no such thing ast he “Nutralife Cup”!) there is still a lot of sense in this report out of Edmonton today. Lets see in the week ahead if these dates are actually confirmed.