TFC And The Un-Magnificent Seven 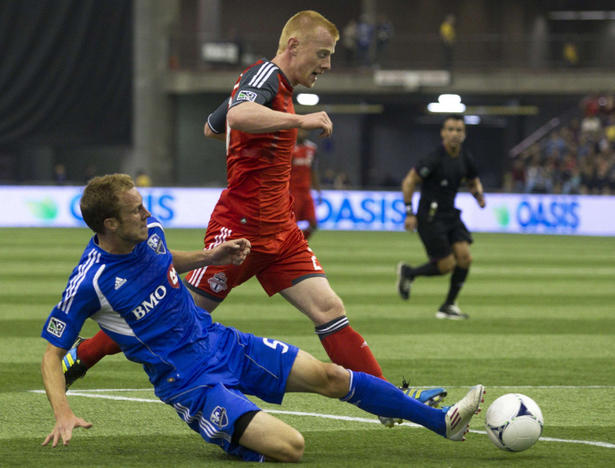 My usual post game video blog will have to wait until I return home and I will post it early Sunday. And I have a ton of video from the stands at Olympic Stadium that I’ll be sharing as well.

But this latest result on Saturday, coupled with an inglorious end to the Cinderella Champions League run last Wednesday in Mexico has made it plain for all to see. Our central defence is absolutely terrible. It is arguably worse than it was at the end of last season. And Paul Mariner and Aron Winter have to date failed to address in any significant way the black hole that is the centre of TFC’s back line.

Aceval, Cann, Harden, Emory, Williams, Maund and Henry. As it stands we have seven centre backs on the roster and collectively they are not worth a bucket of spit.

This “Un-Magnificent Seven”, whether it be due to current injury, convalescence, inexperience, incompetence, bad coaching/tactics or simply not being good enough, have collectively managed to concede a goal once every forty minutes over the first four games of the MLS season.

Saturday their collective un-magnificence made a relatively poor MLS expansion side look excellent and they gifted the Impact not only their first MLS win but also the very first win against TFC ever! And for once being able to stand high up in the stands as I was Saturday at Olympic Stadium in Montreal I got more of a perspective on the scale of the problem.

The Impact, like Santos Laguna, Columbus, San Jose, Seattle and (only partially successful) Los Angeles have decided that popping the ball over the top of the TFC centre backs who are collectively slow and playing generally a high line is the way to beat Toronto FC. And to no ones surprise Jesse Marsh did not deviate tactically from what has worked for everybody else.

The Reds played with a timidity defensively high even for them and it seemed from high up that both Harden and Emory, the designated lambs to the slaughter today, were not comfortable with any kind of pressure. Before getting sent off Emory according to official match stats made thirty four pass attempts on the day. Only nineteen were successful. That is rec league stuff from a defender trying to make sure that his club does not go down to defeat for a fourth straight league game.

To truly get a grasp on the scale of the problem that Mariner and Winter have created for themselves lets take a quick look at the current seven options they have available to them at centre back.

Adrian Cann is a while away from being the saviour at the back this team apparently desperately needs at the centre back position. He has played 45 minutes in a reserve match so far since returning from injury and him getting up to game fitness and being able to cope with the speed of the game is going to take a while. You very well might not see him be first choice for maybe another month. Thinking he is the answer by himself would be in my opinion naive.

Dicoy Williams could be back in a couple of months, or he could be only still on the roster because the club can’t violate league rules by releasing an injured player (I am hearing its possibly more the latter than the former). Or he could end up being decent. Still depending on him for any reasonable contribution this season looks to be a long shot bet.

Ty Harden is what he is, a journeyman MLS Defender who, due respect to him, does not have the pace or talent to be anything more in this league than bench depth or short term cover for an injured starter. And yet here we are with a journeyman centre back who is slow and flat footed at times now having played more games at centre back for Toronto FC than any other player in the six year history of the club.

It would be a shame to throw Donnell Henry, or for that matter Aaron Maund, to the wolves by starting them in a situation where their collective development might suffer if they are asked to do way too much way too soon.

Logan Emory and Miguel Aceval do not look good enough to be successful centre backs in this league. Plain and simple. The way Emory was skinned Saturday in Montreal and how Aceval conceded the first goal to Santos Laguna last Wednesday in similar fashion showed me that Paul Mariner and Aron Winter failed miserably in what was the single most important job this off season, namely improve the club at the back.

I am willing to give the front office the benefit of the doubt on Maund as he is still a kid with potential and a hell of a lot of learning to do. But the two defenders brought into the team during the off season have not looked near good enough. I know that it is early and that there are glimmers of hope on the horizon (Cann and Frings coming back soon would be a good start) but the transfer window is essentially closed and reinforcements can’t come until the summer.

Trading for help at the back might also see the club fleeced pretty severely. I could envision a conversation between Paul Mariner and another MLS front office going something along the lines of “… sure I will give you a defender, all you have to give me is Luis Silva, a ton of allocation and by the way you have to take on at least one really bad contract…”

Not making the playoffs, or at least being competitive in this league this season would be a devastating blow to the fortunes of this franchise. And it is quite possible that it might be too late to make any changes at the back of the scale needed. And if you think that this team, such as it is right now is getting back into the Champions league, let alone winning the Canadian Championship considering they are as creaky at the back as some of those sketchy highway overpasses we drove on going to Montreal on Friday. For the record it looked like a ton of ramps and overpasses in Montreal are falling to pieces and look to the untrained eye to be held together with chicken coop wire!

We very well may have to sink or swim with these seven guys at the centre back position this season.

Anyone got any water wings?