The Case For DeRo As A DP 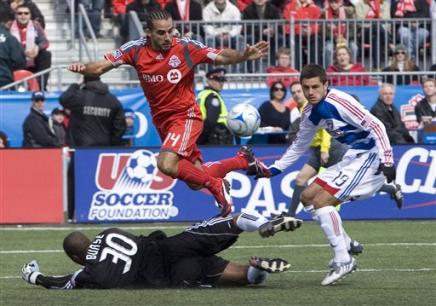 With all eyes on South Africa, TFC news is pretty thin at the moment, and most likely that is how it will be for next couple of weeks.

This is a TFC blog and I won’t be littering the interwebs with more World Cup content when a glut already exists in that category. I am going to keep a close eye however on four players at this tournament that have played for Toronto FC at one time or another (Edson Buddle, Maurice Edu, Andrew Boyens and Amado “El Lobo” Guevara) and I personally wish them well.

Enough of that… Back to Toronto FC business.

The consensus around Toronto FC fans and most outside observers of the club is that TFC must be just about right up against the salary cap at this point and that Mo Johnston must be digging under the cushions of the proverbial sofa looking for some extra money to bolster the squad for the two thirds of the season left to play.

I have been a long time critic of Mo as you probably know. The primary point of criticism for him in my eyes has been his mis-management of the salary cap and scarce allocation dollars since day one. I won’t re-hash that argument here, suffice it to say Mo rummaging under the sofa seat cushions is probably not far off the mark from reality at this point in the 2010 season.

The needs that this club has are obvious, help at fullback, the wing and striker are at the top of the list. And I am sure Preki would love to have the depth of the squad improved upon wherever possible at virtually every position. However wants and reality are two very different things. With not a lot of money likely left to play with the club is left looking for “bargains” to bolster the squad for the run in this season.

TFC Captain and undoubted MVP Dwayne De Rosario should be the first, and perhaps best place, to be looking at this point for some of that extra sofa money. You see just after the new MLS collective bargaining agreement was signed earlier this spring, the league announced changes to the Designated Player rules. And here is the opportunity for TFC to both reward their best player and free up some dollars to bolster the squad by taking advantage of the new rules. Creatively using the DP rule changes could free up some significant dollars.

To quickly recap some of the salient rule changes, here they are:

Do when it comes to DeRo TFC has a number of options that could both reward him for his outstanding play and give management more flexibility. TFC could for example sign DeRo to a “Half Season” DP contract. This would allow Toronto FC to both give him a well deserved raise and actually see the salary cap hit his current salary makes against the salary cap actually drop

for the rest of this season. This frees up extra dollars that could be used to fill other holes. He could be signed to a long term (2 or more seasons perhaps??) Designated Player contract. This would be a way to lock him up for the rest of his career and also keep an alleged promise made to him last season about his salary. Finally, with TFC being undoubtedly short of cap and allocation space the ability to go out and sign another DP other than DeRo for example must be judged to be somewhat unlikely at this point.

There can be no doubt about the quality of his play this year. The results speak for themselves. DeRo has been making a convincing case since putting on the Captain’s armband that not only is he TFC’s most valuable player, but that he should be in the running for MLS MVP as well. He is near the top of the league in goals and with current scoring leader Edson Buddle at the World Cup, there is a chance that his current form will vault him into the lead, a lead he could perhaps not relinquish. Try and picture where TFC would be for a moment without his goals and leadership and it becomes obvious, to me at least, that DeRo is definitely worth it.

I am one that believes that MLSE is not cheap. They have never been shy to spend money when they feel it necessary to do so. They are also quite cognizant of their image and are sensitive to public perceptions. Rewarding TFC’s best player with a raise would be a smart public relations move from an organization that not only understands image but also wants desperately to get into the playoffs this season. Having a happy captain certainly goes a long way towards making that happen.