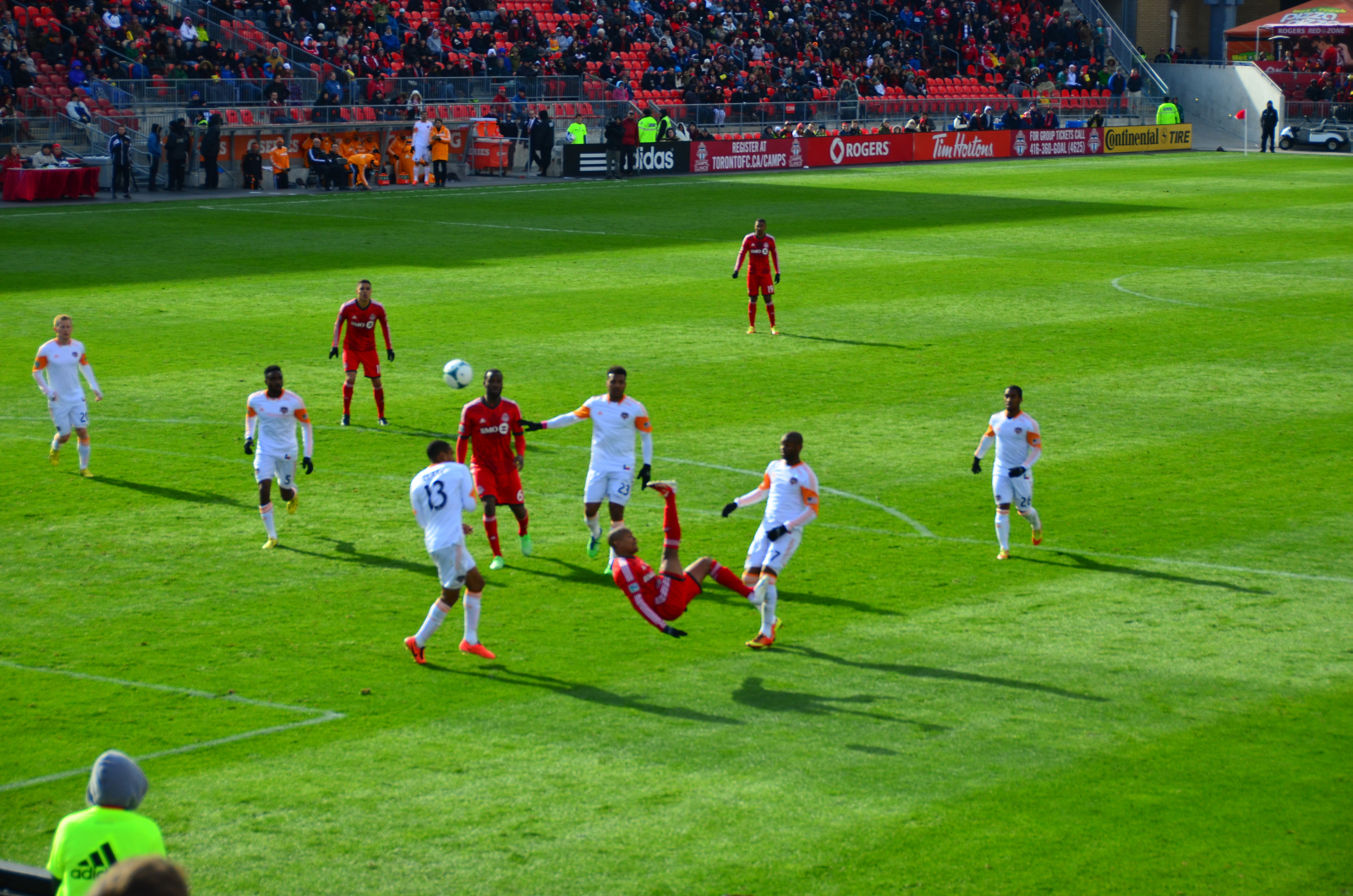 What is it with TFC and injury time goals !!!!  Warren Creavalle scores in 90+3 to grab a share of the points which Houston scarcely deserved in this game, but it was one of those deja-vu feelings again …. Against Philly last week, Jack McInerney scored in 90+2 for another 1-1 tie, the week before that it was TFC grabbing a 2-2 draw from the jaws of defeat courtesy of Justin Braun in 85′ and Darel Russell in the last few seconds of the game, and the week before that Jose Villareal scored in 90+2 to secure a share of the points for Los Angeles at BMO.

With the exception of the Dallas game where we were the ones coming back and felt elated, the Houston, Philly and LA games felt like a punch in the gut for the TFC faithful. That is 6 points tossed away in those three games. We were in control and barely had to last another minute …. those 6 points would see us sitting joint second in the East alongside Montreal and Houston !!! But as one football commentator from back over the pond used to say … “It’s a funny old game …!!!”

On twitter earlier in the week, local journalists were musing in 140 characters or less about what we should expect from the next 7 days?

With a game against Houston, a Voyageurs cup tie versus Montreal, and then a home tie against the Red Bulls, it was, in one journalist’s opinion, the make or break week for the season.

Not sure I agree, but I considered his posts, and thought to myself we can maybe get 1 point from a good Houston side who are not so good on the road, we can get a result against Montreal, and depending on which Red Bulls turn up, we may be able to squeeze all three out of them?

That would be a successful week and wiping the smile of Thierry Henry’s face on Saturday would be a nice way to round it off.

Despite the bitching and moaning about the late equaliser from us all, myself included, I am not ready to join the ranks of the doom and gloom merchants.

I have no stats to prove or disprove it, no in-depth analysis to make a point, just my own observations, and the very unscientific benchmark of my own level of enjoyment of TFC games so far this season to suggest we are in a far better place than we were this time last year. Even though the last second equalisers do prompt a bit of a facepalm, the overall effort of TFC2013 compared to TFC2012 is as different as night and day.

TFC are now playing football. On Saturday we bossed the game against a solid and successful MLS side, we had some nice passing moves, and we pushed, harried and pressured for the full 90 minutes.

Unfortunately, the game lasted 93 and those last few minutes saw an equaliser that has become all too familiar. We are not the finished article, we are not as good as we can be, but we are headed in the right direction. At the start of the season we were a 45 minute team … we played one good half and one bad half. Over the last few weeks, we have progressed to being almost a 90 minute team, where we can look to win a game – or to claw it back – in the 90. Now we need to go one further and become a 95 minute team so we dont lose silly goals in injury time.

Anyhow, on to a few stats from the game …. and the gallery

[singlepic id=11481 w=320 h=240 float=left]What is written in the previous paragraph was basically a portion of pre-match comments I made elsewhere, and they come direct from the stats issued by MLS or available from match reports on sites like ESPN as well as from personal experience of watching the games he has reffed. On Saturday, he pretty much blew these assumptions out of the water. Overall he had a decent game. He was a little fussy, especially in the first half and also made a few bad calls that maybe should have gone in the other direction, and his booking of Reggie Lambe was maybe a bit soft but he got the big calls correct. The red card was justified, Taylor impeded Earnshaw and he would have been clean through so it was a clear goalscoring opportunity. TFC had the ball in the net earlier in the game called back for offside and that too was correct, and despite our frustrations, the 93rd minute equaliser was our fault, not his. Overall, a solid if unspectacular game for the ref.

So onwards to the Voyageurs Cup and the first of three visits Montreal will make to BMO field during the 2013 season.

Gallery for this game: HERE