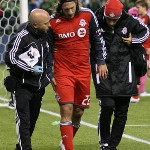 Until Torsten Frings showed up in these parts last summer, I always thought that the most intelligent footballer that had ever dressed for Toronto FC was without a doubt Amado Guevara. Guevara is still a favourite of mine, but I think it is fair to say that great footballer though he was here in Toronto he can’t hold a candle to Torsten Frings.

And now with the most intelligent footballer in club history sidelined perhaps until the Voyageurs Cup kicks off in Montreal on May 2nd (assuming his recovery goes to schedule) a lot of the cracks in this team that a player such as Frings papers over might very well start to show themselves once again.

“To replace [Frings] is’nt easy, because to find a player, like him, we don’t have it.” Aron Winter

I am not even going to think about Santos Laguna and the Champions League at this point and how the absence of our Captain makes the job of being competitive with the current best club in Mexico much more difficult than it was already going to be. Right now the focus on in MLS and how this untimely injury might seriously put a crimp into TFC’s early season aspirations to kick the 2012 league campaign off on the right foot.

If you look at the games that Frings is likely to miss if he is out for six weeks (assuming that he is only out for six weeks) it is perhaps one of the friendlier parts of the MLS Schedule for TFC.  The first two matches are at home versus San Jose and Columbus, teams that are struggling to score right now but who might be able to take advantage of TFC defensive frailties with Torsten not being out there on the field. After that there is the trip to Montreal to play the Impact at Olympic Stadium. That is followed by two more home games versus Chivas and Chicago respectively. Then the Reds are off to Rio Tinto Stadium to play (and probably lose to) Real Salt Lake.

There are five games in this run against by MLS standards relatively weak opponents (four of them at home and the other against an expansion team) and TFC’s best and most important player will not be in the mix.

Many commentators and pundits who follow this club has postulated that Frings’ quality has to a large degree given the club a bit of a pass when it comes to the “incomplete” grade many feel they deserve when it comes to the most significant need in the past off season (namely shoring up a poor central defense) only being partially addressed. And that is squarely on the shoulders of Paul Mariner and Aron Winter respectively.

When Ecuadorian International Geovanny Caicedo was cut by the team in pre season before ever kicking a ball in anger for TFC and no reinforcements were brought in to replace him (with the exception of triallist Logan Emory being signed last week) the club seemed to me at least to have decided to rely upon Frings as Sweeper to hold the fort until Adrian Cann and perhaps Dicoy Williams recover from injuries to rate selection again. And now that Frings is out and Cann is weeks away (and Williams in months away I hear) the team is faced with having to rely upon Harden, Aceval, Maund and Emory (with only Harden having any semblance of MLS experience), and defensive midfielders de Guzman and/or Dunfield to step up their games from what we have seen so far this season. It probably also means that fullbacks Eckersley and perhaps Morgan will be asked to stay further back than they have played to this point which of course has a knock on effect on the ability of the team to be as successful as they have been to this point offensively.

And now that Frings is not part of the mix for the month and a half the club perhaps finds itself in the position of not having the players to continue playing the 3-4-3 tactical approach Aron Winter has insisted upon up to this point. That means that the club is probably trying to figure out as I write this tactically how to reconfigure itself heading into the next few weeks of MLS games, let alone the Champions League Semi Finals!

We all of course hope that Frings is the tough guy he appears to be. Historically he has proven to be resilient physically, only losing significant games in 2003-2004 with a knee injury and next to none since. A world class professional such as himself probably possesses the physical and mental strength to recover well from this injury. Whether his thirty five year old frame allows him to do so remains to be seen.

A more significant upgrade of the team at the centre back position in the past off season would have gone a long way to mitigating the impact of this injury on the fortunes of the team. Now we are relying upon a MLS journeyman, a signed triallist, a SuperDraft Rookie and a league newcomer from Chile to hold on until we get a player who has been out for almost a full year (Adrian Cann) back to possibly fill the void.

Not exactly the kind of upgrade we all hoped for TFC defensively was it?