The Schedule is out!

And after looking at it for a bit there are some interesting things about how the schedule looks for Toronto FC that are definitely worthy of discussion and thought. A lot of the story lines that will be written about TFC 2011 in this space and elsewhere in the coming months are already on the list below for all to see.

Before I get to them I wanted to say first that having to buy tickets in November and having to wait until mid February before you know when these games you paid for months in advance are even going to be taking place is one of the silliest things about being a fan of a club in MLS. I would hope that as more teams move into their own stadiums and as MLS clubs hopefully become more established and successful television properties going forward that this farce is something MLS is able to dispense with in the years ahead.

Here at last is the schedule in detail with home dates bolded and start times in Eastern Time.

Mo Johnston was (in)famous for not assembling his TFC squads over his four years here until well into the first month or two of the season. As a result Toronto limped to a average start out of the blocks over their first eight games that worked out to be roughly 3 wins, two draws and three losses per season. Averaged out over the four years of futility Toronto only managed to convert about 45% of the points available to them.  Me thinks Aron Winter won’t make the 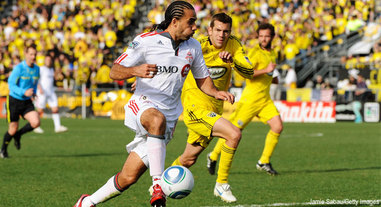 same fatal error (at least I hope he won’t). This year TFC plays five of its first eight games at home. Of those five, one is against an expansion club, three are against clubs that finished below TFC in the standings last year, one is against Columbus (who TFC is more than due a victory against) and the other is against the LA Galaxy. If Aron Winter can find a way to say win three or maybe even four of these home games then TFC will be in the hunt early on. Once again that darn Columbus game on April 23rd is going to be one of the key points of the season.

MLS Does Not Truly Get Supporters Culture

I can’t speak for fans in other cities but I can tell you that some of the single most important events that led to the development of the supporters culture here in Toronto as it is today were some of the big road trips that have taken place to cities like Columbus, Philly, New York, Boston and Washington DC. Away fans add to the experience of home fans and there are a couple of simple things that MLS can do to facilitate the growth of this part of the game. One is work on security arrangements (a topic for another blog) and the other is to schedule games that allow away fans to organize trips to cities within reasonable distance. If you look at the schedule above and focus upon the away matches early on the first one for TFC against a team in the Eastern Conference is on Wednesday June 15th against New England . A weekday away game is not going to allow more than a token group to go to Boston for that game from Toronto.

Scheduling a game in New York City for TFC on a weekday in July and a date in Chicago on a late Sunday evening in August don’t help either does it? The only real chances for any substantive road trip away for Toronto fans are Columbus, Philly and perhaps Washington DC all after Labour Day. At the MLS Supporters summit during last year’s MLS Cup festivities I heard Don Garber say his biggest single worry is fan violence. I guess he simply does not want to take any chances. And with the Voyageurs Cup tournament supposedly being changed in format this season with the addition of FC Edmonton, this means that even a road trip to Montreal is out as well.

The CONCACAF Gold Cup tournament will be happening this year and it will be taking place between June 5th and 25th. If Canada goes deep into the tournament that means that TFC could lose Canadian players like Dwayne de Rosario, Julian de Guzman, Adrain Cann or Nana Attakora for potentially for up to three to four weeks. During that stretch TFC has a number of difficult fixtures to deal with, including away visits to Los Angeles and Salt Lake City on top of home tilts with Kansas City and Seattle. This could perhaps be the toughest single stretch of the TFC schedule. It again puts a renewed emphasis upon the importance of a fast start considering June might be a bit on the tough side.

All is not bad however. In a more positive development MLS needs to be given a bit of credit for at least trying to accomodate the FIFA calendar a bit better this year. The International weeks between September 2nd-6th and October 7th-11th see TFC not playing any matches whatsoever.

And what about the Voyageurs Cup, and for that matter the CONCACAF Champions League you may ask??  More on that when we hear what the format of the tournament will be. It will likely mean an absolutely crazy May and June.

Television has much more of an impact on how any MLS schedule is put together …perhaps more than any other single element. This especially applies to TFC and how their home dates have been scheduled. Rumours have swirled over the past weeks about the likelihood of TSN acquiring the rights to broadcast TFC (and Whitecaps) matches and with the release of the schedule Thursday this is looking more and more likely to happen. (More on this next week in this space).

With CBC, being the primary broadcast partner in previous years, having Hockey filling their Saturday evenings during the spring and fall is why most of the Saturday home games they televised over the past four years took place in the early afternoons. This year sees eleven of seventeen Toronto FC home games being scheduled in the evening. I for one am quite pleased with this. There is something to be said for not needing SPF 99 sunscreen anymore and for that matter it should be a bit easier on the players not having to run in the 30+ degree sunshine as much. There will be enough of that on trips to Houston & Dallas.

Six games in forty two days. It certainly could have been much much worse!

TFC finishes the regular season with six games after Labour Day, three in September and three in October, and they have the aforementioned FIFA dates to take a break and get ready for the run in. Two of the home games will probably be particularly challenging (Red Bulls and current MLS Champions Colorado). On the flip side TFC’s last three away matches are against Columbus, Philadelphia and Chivas, and only the Crew finished ahead of TFC last season. The Columbus and Philly games will probably see significant TFC away fan support attending according to a quick read of the message boards today.

The optimist in me looks at this run in and sees that three of the clubs TFC faces in the last six games are clubs that finished below Toronto last season, and on top of that ten clubs make the playoffs this year versus eight in previous seasons.

If Toronto does not make the playoffs in 2011 I do not think it will be because of this schedule.

What do you think about the TFC schedule? Your comments in this space are always welcome and appreciated.