Payne In – Anselmi Out 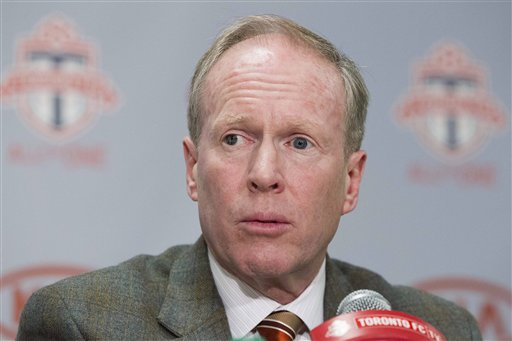 This is a good day to be a Toronto FC supporter. In one fell swoop Toronto has added a vast quantity of soccer and MLS intelligence to the Front Office. Day One at DC United employee Kevin Payne is now the new President and GM of Toronto FC, filling what was arguably the biggest hole to fill in the structure of the team, in reality empty since its inception in 2006. Mr. Payne will be the Top Dog overseeing all aspects of the club on and off the pitch. Thomas Rongren, Paul Beirne, Earl Cochrane and Paul Mariner will all report directly to him. Rongren and Earl Cochrane get to re-establish professional working relationships with the man who hired them previously in their stints working in Washington DC.

Payne gets to come to a club that unlike DC gives him the infrastructure (Stadium, Academy, money bags ownership willing to spend) that he pretty much never had in Washington. And I am sure he gets complete control over everything, only needing Anselmi to sign a cheque or two from time to time.

Payne has done all there is to do in MLS and his hiring will almost instantly improve the somewhat tarnished reputation that TFC has within the League and within the industry overall caused I believe largely by ineptitude and a true lack of leadership and vision from the top of the organization since day one.  And in media availability after his introduction he was smart enough to temper on field expectations for 2013 by stating that getting to the playoffs next season would be a huge challenge but that he feels by 2014 Toronto should be in the mix and by 2015 competing for trophies/honours in MLS and CONCACAF. Saying anything else would have been ludicrous.

Between this hiring and getting the season seat pricing right, I think it would be unfair to call this off season to date anything less than successful, AND SMART, for Toronto FC, at least off the field. News will, especially after the MLS Cup this weekend, will start coming in fast and furious again about the comings and goings amongst the players. Believe it or not folks but Training Camp begins in less than eight weeks.

Perhaps nothing more illustrated for me the true need for a gentleman of Kevin Payne’s pedigree and abilities to be hired to run this team than the response posed to a question from outgoing “Leader” Tom Anselmi in the Press Conference on Wednesday. Below are both the video and the verbatim transcript. Please feel free to judge for yourselves.

Tom Anselmi: “…A couple things… set aside the first few years of expansion years and headed down the path that resulted in Aron (Winter) and the team we put together two & a half years ago… that was based on a model that was different than this clearly but really had the same responsibilities as a President. You know Brian Burke is the president of the Toronto Maple Leafs but he does not worry about things like marketing, so it was fashioned after the same kind of model. I think the change in direction here, which is clearly the model in North America, a little less so in Europe, is disconnecting the Head Coach from what was just not working. And it became apparent to me that as you study the clubs that have been successful (that) there is someone there leading the organization and there is a coaching staff with different responsibilities and agendas. So that’s really where we have landed.”

If I could take a moment to try and translate the gobbledegook above into some sort of coherent answer based on what he said here is what I think Anselmi was really trying to get across.

“A couple things… I feel I get a pass for not doing this sooner because we were an expansion team and I thought that I got it all squared away when Aron Winter was hired in 2010 to try and clear up the Mo/Preki mess. I did what Klinsmann told me to do and still it failed! I only know a little about hockey and to prove it I will mention Brian Burke in my response for no apparent reason. I finally get now that having a guy running TFC (unlike me) who knows what he is doing with the Soccer Team on and off the field is what was needed and that it’s the norm in North America. And now that I finally have my nameplate on the door of Peddie’s old corner office I can respond to valid concerns with an incoherency that should allow me to skulk back to the ACC without really answering what in essence was a real simple question…”