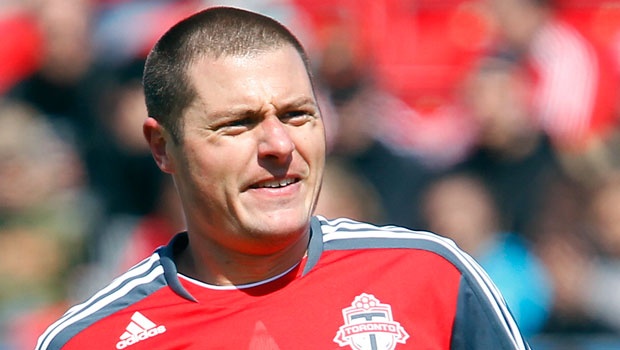 I was waiting to shoot my customary post game video after the road win Saturday night mainly because the story from the game, not the rare road win – but the devastating injury to star striker Danny Koevermans, was far from a complete narrative. And I thought that once I knew his status I could reasonably put the outcome of the game into some sort of context.

But now that we all know that Danny Koevermans is done for the season with what might turn out to be a career ending type of injury (http://www.torontofc.ca/news/2012/07/koevermans-out-season) I frankly am too gutted to try and talk about the game in any detail.

You see it came to light Monday that it was indeed Danny’s ACL in his left knee that has reportedly ruptured on a play in the first half Saturday night in New England that saw a combination of a knee on knee with Revolution defender AJ Soares mixed in with a healthy dollop of that crap surface known as FieldTurf leading to arguably TFC’s most important player now being placed on the shelf for what could be up to a year or in the worst case could be the last time he ever plays.

Danny, if you have been counting, has scored nineteen times since joining TFC in all competitions since last summer. He also had a period earlier on in the 2012 campaign that saw him on the shelf as well. No striker in this club’s short/painful history has come close to matching his numbers on a per game basis. Here is breakdown below of the top five scorers in team history for some context:

Only DeRo (not technically a “striker” in the conventional sense) has come close to matching Danny’s per game production and being anywhere near the same sort of consistent threat to score a goal every time he went on the field as Koevermans has proven to be.

Now Danny is gone for 2012, could be on the shelf for a big part of 2013 and might never ever suit up for TFC ever again.

And did I mention that in the last two weeks the club has released one striker (Nick Soolsma), saw another one (Joao Plata) leave the club under mysterious circumstances to go back to Ecuador reportedly before the loan deal with his home club was finalized and picked up a green as grass striker from FC Dallas (Andrew Weideman) who including last Saturday has now made a grand total of nine MLS appearances in two and half seasons and has not scored a single goal?

And of course also on the roster is Academy prospect Keith Makubuya who has a grand total of 46 minutes of MLS experience at Striker dating back to the first game of the 2011 campaign. He yet has to score for TFC.

All due respect to the two kids but if you have not scored or even featured in the league at this point in the 2012 campaign it is hard to call yourself a MLS striker. Ryan Johnson is the only bona fide striker the team has.

And now there is a huge dilemma for the club. The recently freed up Designated Player slot from the de Guzman deal that is being rumoured to be used for a stud centre back from Europe (Olaf Mellberg from Sweden is being linked to the DP slot) might now end up being used for a striker itself.

Without a doubt the Koevermans injury was a piece of bad luck. And one might say that if there is a club in MLS that perhaps deserved a bit of good luck it would be Toronto. However if you take this piece of bad news and combine it with the following bits below you get a killer combination of bad luck and dare I say incompetence that leaves the club with little room or resources to bring in a player the quality of a Koevermans AND significant help at the back at the same time:

If all this drama, silliness, incompetence and bad luck was not involving the club I support it might be absolutely laughable.

I am not laughing.

Interestingly a move out west this week might offer TFC some sort of a lifeline if another Canadian club can be convinced to deal with Toronto again. Scottish International Kenny Miller has signed on Monday as the Vancouver Whitecaps third Designated Player. He and the emerging Darren Mattocks have essentially banished 2011 stud striker (and TFC killer) Eric Hassli to the bench. Hassli would be an excellent replacement for Koevermans if some sort of reasonable deal could be brokered and the fact that there would be more opportunities down the to burn Vancouver with a former player the way Terry Dunfield did last week.