The various Toronto FC supporters groups are very similar but yet very different in many respects. Each group has its own “style” of support that sees like minded individuals gravitate to one or another group based on I guess a fit or a comfort level. Sometimes like myself, it comes down to simply being invited in by a friend and making myself at home.  In any case, thee relationships that each group have with one another can be strained at times and very close and cooperative at other times.

Now yesterday’s home opener at BMO Field saw two very different groups in different parts of the stadium, the North End Elite & the Red Patch Boys, have apparently similar issues with Stadium security over banners that were quite critical of Director of Soccer Mo Johnston.

In the first incident before the game a Red Patch Boy member had the “two stick” style of banner confiscated by security personnel. Judge for yourself if this message was inappropriate or not from the image below. 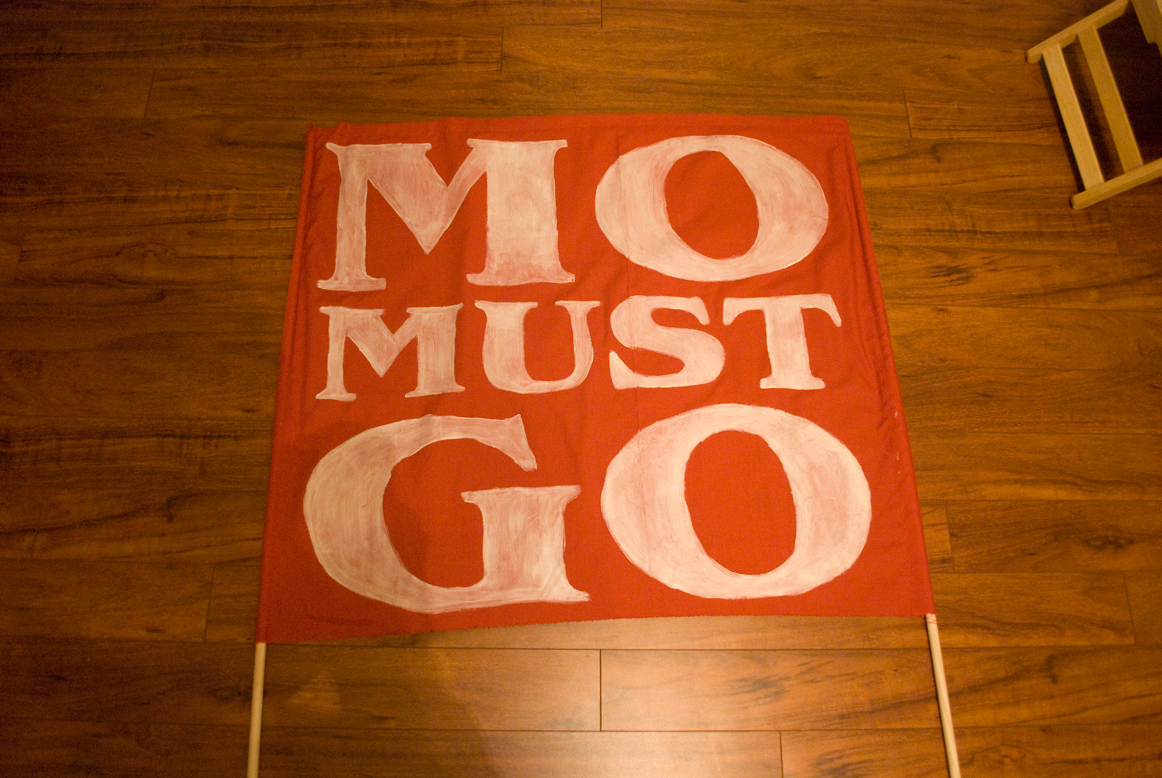 Paul Bierne, TFC’s Front Office Manager stated on the Red Patch Boys message board that the confiscation of the banner above was a mistake and he apologized for it. He went on to state that they “…screwed up….” and then stated that the only line they draw on banners is profanity or “offensive” messages. In a later post he stated that the banner in question should have been allowed in and would be in the future.

The North End Elite unfurled a banner later in the game that said “NOMO MOJO” next to another banner showing Johnston’s face with a red circle and slash through it as a way to voice their displeasure with Mo and his running of the club. Again judge for yourself what was on display.

Sources indicate that there was a meeting between representatives of the various supporters groups and team management before the home opener where a new policy surrounding things like banners in the stadium was relayed to the supporters groups. Banners and such had to be checked in through a specific stadium gate well before game time according to the new rules.

Upon arriving at the gate these individuals were allegedly asked to sign documentation stating what they were bringing into the stadium along with contact and other personal information by security staffers. Allegedly this part of the new policy was not relayed to the supporters groups at the previous week’s meeting.

Sources also indicated to me that the individuals that brought in the banners in question were stopped on their way OUT of the stadium and asked to reveal their “Anti Mo” banners and they were allegedly told by BMO Field security that their behaviour in displaying them was out of line and that it may impact their ability as a group to bring banners and such in for future games.

This game was broadcast on national television in the US last night and some supporters are claiming that these alleged “mistakes” were not random errors but a concerted effort by the front office to avert negative press coverage and criticism of Mo Johnston becoming potentially a storyline in the coverage of the Home Opener. Keeping the banners out or out if sight means that the focus is on more “positive” aspects of the opener such as the new grass surface and improvements to the stadium. Or so the theory goes. This could be gospel or it could be nothing.

Another senior supporter’s group member from another group I spoke with today took the opposite view. He pointed to previous inconsistencies in getting enforcement of rules on materials into the stadium and he chalked this all up to the likelihood that not all the security staffers were singing from the same songbook. And perhaps he is right. Who really knows.

The choice is to either take the club at its word or not take them at their word.  TFC’s Paul Bierne says that these banners would be allowed in next home game as is without any problems. The next home game will not be broadcast on national TV in the US either.

Each incident looked at in isolation perhaps may not seem like a big deal. I would submit that if you look at them together there is a possibility that this could have been a policy to keep these anti management messages out of the stadium, off television and not end up becoming a large part of the story.

Many will disagree with me on this but I for one think that this was part of was a concerted PR effort to keep the focus on the game, the grass, Jimmy Brennan’s retirement and the improvements to the stadium and off Mo Johnston and his job performance. This is opinion only based on my reading of the facts. I could be very wrong or right on the money. I think how things go next game will determine how right or wrong I truly am.

Toronto FC fans, especially those active in the supporters groups, are a vocal lot that will let it be known when they are upset.

The main outcome of this story in my eyes is that there is now a 100% guarantee that these kinds of  banners will be brought to the stadium for the next home game on April 24th and most likely in significantly larger numbers as some supporters react to what they see as a clampdown by the club they do not agree with. The test for TFC is will they let them into the building.