Aron Winter vs The Media 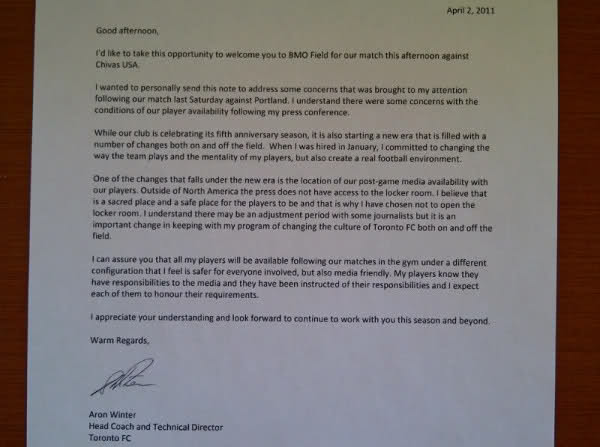 From one controversy to the next one seems to be the order of the day with Toronto FC. Quick on the heels of the massive news about the trade to New York of Dwayne de Rosario last week came news that Head Coach Aron Winter had made the decision to bar media from the club’s dressing room after games as of Saturday past, in direct contravention of league rules.

Here is the letter announcing the change in club policy in its entirety that was posted on the dressing room door:

This new policy lasted until Don Garber, the MLS Grand Poobah himself, came down with a league edict this week that essentially stated that this was not going to fly as it was in direct contravention of MLS league policy. To his credit Garber did not come down too hard on Winter for trying to do something that was a direct contravention of league rules. In fact I think Garber was quite conciliatory in his words released this week all things considered when in fact he had every right to come down hard on the coach and the club. Good intentions or not TFC broke the rules. Winter was pretty lucky to get away with  no fine or a suspension in my opinion. Here is what Garber had to say to the Canadian Press.

“…We recognize that many coaches come from a European environment where there’s less access to the locker-rooms because that’s the culture…Well, that’s not the culture that exists in North American sport. One of the great aspects of our industry is the symbiotic relationship that exists between the media and pro sports teams. It’s a partnership, together, to grow the game…Aron Winter came into this with a European background. I think he’s going to be a great coach and a participant in helping to grow the game in Canada. And I’m sure Aron will be letting the media into their locker-room…You can’t create rules that work for one team and not the other or one coach and not the other. Rules are rules…” (Don Garber – April 6 2011)

This Saturday evening we will see exactly how TFC will be responding to this edict from MLS. The club left early Thursday for northern California as they take on a tough league opponent in the San Jose Earthquakes Saturday night. There are usually one or two local media on the road with the team and we will have to wait and see what they tell us about how coach Winter implements this.

TFC fans have been all over the place on this subject. Large numbers of supporters on the message boards expressed support for Winter in this stand and at the same time questioned the value that there is in the media being in the dressing room immediately after the games anyways. One group in particular, the North End Elite, even formally sent an open letter this week to Commissioner Garber expressing their support for Winter and his stand against media access to the locker room.

Some others even chalked this whole thing up to a language/culture barrier on the part of Winter. That argument holds no water to me considering how well (ghost?) written the letter was and of course that Winter would likely have in advance at least run this by people in the organization like Paul Mariner and Paul Beierne, who both for example have extensive MLS experience. Large numbers of supporters applauded Winter in his attempt in even a small way to try and implement another aspect of what many see as the “correct” European way of running a professional soccer club.

On the flip side of all this I get where a lot of the journalists are coming from on this issue as well. One friend of mine who writes about TFC professionally told me that he has a deadline to submit an article on the matches he attends no later than one hour after the end of the game and any delays he has in getting access to the club/players not only seriously degrades his ability to do his job but also potentially hurts the quality of information that he can provide to TFC fans. And whether one likes or dislikes specific individuals in the media who report on the team, we to a large degree depend upon them in a way as our surrogates. They hopefully ask the questions we want asked and they funnel through to us the information we want to know about.

I am not sure of truly what Coach Winter had in mind here other than what he wrote in the letter and I have no reason to doubt his intent or sincerity, so I will not do so. But at the end of the day North American soccer in not European soccer. On this side of the pond there is a sports culture that sees the media generally have a greater level of access to the teams and the players than just about anywhere else, and fans demand to hear from the players and clubs directly and often. I for one applaud this. In Europe the press have next to no direct access to players and coaches in the same way as they do here. That leads to scribes and pundits having to fill even greater quantities of column inches and air time with smaller quantities of fact and larger quantities of what only can be categorized as conjecture and opinion. Frankly I feel this leads to much of the stuff that many of us hate being passed off as “journalism” that is epitomized by much of the sports/tabloid press in England and Spain.

I think many supporters who are with Coach Winter on this issue are potentially confusing their possible negative impressions of specific journalists in particular, or the profession in general, with a desire to see a culture change within the club. I get that sentiment but I think it is slightly misdirected. There is an incumbent sports media culture in North America that MLS is fast becoming a part of. Journalists have greater access here than in Europe and that is not going to change. Perhaps we can wish that those journalists who do get into the locker room perhaps find ways to improve upon the quality of the content they provide us. But that is an entirely different issue (and one worthy of debate) than whether they should or should not get access altogether.