I have been taking pictures at BMO field, in the stands since the opening season in 2007. Getting the camera into BMO Field has always been an issue, so much so that for the first few seasons I carried not only a printout of the BMO and TFC camera policies but also a letter from Paul Beirne specifically noting that cameras were permissible for personal use and that my use had been verified as such.

This website exists for friends and fans alike, its personal rather than professional and I never thought it would be around for 15+ years if I am honest, but it has just kept plodding along. There is no commercial element to it, and although we have google ads on here, realistically they have never generated enough to pay for a memory card let alone anything else. The site is actually funded based on Ad revenue from another site that I have been running for 28 years (CaleyThistleOnline). My TFC photos have only ever appeared in print once (other than the odd Wikipedia page) and that was in Joshua Kloke’s book, ‘Come On You Reds‘ for which I asked for and received nothing but a thank you and a copy of the book.

Over the years, with or without the letter from Paul (mostly without since he has been gone for a fair few years now), I have had varying experiences with security at BMO mainly on entry. Once in the stands in section 113, everything is fine. The security and guest services personnel are typically those who have been around for a few years so a camera with a zoom lens is no surprise. However, getting to 113 is sometimes a challenge as I have been told everything from its absolutely not allowed, to its a professional camera (I use a trusty old D7000 which is not exactly state of the art, nor good enough to be down pitchside with a mega zoom lens) to the fact that I need a press pass … I was always able to be assertive enough or ask for a supervisor to get me in the gate but its a bit draining to be honest. 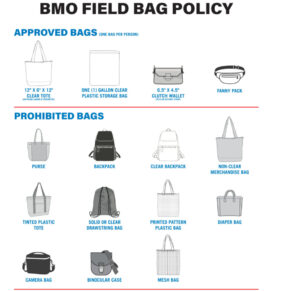 However, it looks like this may be even more challenging during 2022 as COVID measures from our initial return to BMO in 2021 have been continued in terms of the more restrictive bag policy. I understand and respect what they are trying to do for everyone’s safety, but it seems just a little too restrictive. I cant help feeling that perhaps the opportunity was taken to use this as an excuse to leave a far more draconian policy in place than is absolutely necessary. No diaper bags either? Luckily my little guy doesn’t need these any more but he would not have made it through his first couple of seasons at BMO if this had been a restricted item back then. I can see a fair number of young families getting caught out with this particular rule.

I have access to a regular camera bag (approx. 1/2 size of a backpack) and this is not allowed. Fair enough its really a backpack type item and I basically didn’t take it before because it was the one that always seemed to draw over-officious security at the entrance gate like a magnet. I also have access to a small 6x5x4 cube camera bag that snugly fits and protects the camera and not much else. It just falls within the size limit for an allowed clutch purse but it IS a camera bag and that is explicitly banned according to the BMO Field website.

It may not be worth trying to reason with security personnel for any of this and I don’t see the camera fitting into, or being protected by, any of the approved bags so there may be a dearth of photos again this season unfortunately. Got to figure out if there is a way I can take any kind of bag which I can use until I get to BMO then just put in my pocket (like one of the black TFC drawstring bags ~ also not allowed) and sling the camera around my neck as the camera policy hasn’t changed, just the bag policy. However I am also not totally comfortable with that as the padded bag is for protection from damage as well as the weird weather we have all experienced at BMO Field on occasion.

I will endeavour to keep the stats and other pages up to date as I know there are several people who come here regularly to view that info but in case anything is a little behind then I absolutely recommend that you follow @martyn_bailey on twitter if you don’t already. In fact, follow him anyway as he has all sorts of instant stats at his fingertips that he regularly posts before, during and after games. If you hear one of the commentators quote some obscure stat, then its most likely to have come from Martyn.  I’ll keep bashing away at the stats we have here for as long as I can and maybe make some other enhancements to the site if bringing the camera and uploading photos becomes an issue. Lets hope we are all posting some positive stats this year both from the football world, and the real world.