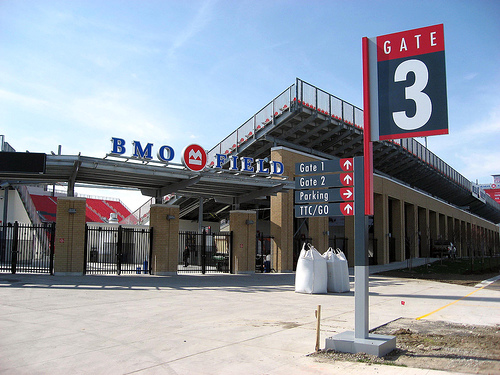 I know that it won’t be easy trying to sell upwards of 60,000 tickets on short notice in a tough economy for a competition that many of their more “casual” customers might not give a hoot about. It’s also not easy when less than two weeks from the kickoff of the group stages of the CONCACAF Champions League Toronto FC has just been given the actual dates for all of the three home games they are going to be playing . They have fifteen days to move tickets for the first match versus FC Dallas.

All of these factors are going to contribute of course to how many people are in the seats for those three games without a doubt. And as a true fan I hope that they succeed in getting as many people into BMO Field as they can. The bigger the crowd the bigger the home field advantage. And I want TFC to have as big a home field advantage as they can.

The ask for the Sales & Service team at TFC is a large one. I wish them all the luck in the world.

What I do not want to see happen is what we saw take place a couple of weeks ago versus Real Esteli in the preliminary qualification stage, namely a stadium well less than half full. That game set a new record for the lowest paid attendance ever for a TFC home game. And the consensus in most quarters is that the pricing for that game was the primary reason for the low turnout.

And to their credit it appears that TFC did indeed look at the pricing structure and it has been adjusted lower across the board. Here is the link with the details: http://www.goltv.ca/assets/1/AssetManager/CCLGroupStagePackage.pdf. The question that will be of course asked is did they go far enough with their pricing to get the stadium filled for these three games? On first blush I applaud them for the progressive moves on pricing but I think that it is not enough of a discount to get the attendance for these matches much over 11-12,000 customers versus the less than 9,000 who paid for the Real Esteli match.

Now of course the bread and butter for any MLS club are the season ticket holders who make up the vast majority of their customer base and the primary source of revenue/profits for the club. In this case I think that the club is operating under some mistaken rationale if they at all think that they are somehow going to devalue the pricing of their MLS season tickets now or going forward when they offer these Champions League matches for a considerably lower price than they have previously. Hence the relatively small discounts on offer I believe.

Another case in point that I think proves the position surrounds the issue of scalping. Only this season when there have been tickets to sell at the box office rather than in previous years has the club done anything significant to try and deal with the scourge of ticket touts.

In my opinion the club truly believes that scalping is beneficial to them when the house is full as a healthy secondary market for TFC tickets creates artificial demand and justifies the prices being offered today or in the future. And if hypothetically next season every seat was sold in advance you would see the scalper crackdown stop in its tracks. Not to be too critical here but how TFC handles the scalping issue tells me that the club is a business and that once they make a business decision they stick to their guns. The bottom line here is that TFC as a business feels that they are probably setting a poor precedent for the future if they offer fans a dirt cheap seat for the Champions League because it shows them lowering prices for once and not raising them.

For me however here is my bottom line. Lowering the prices for the Champions League DOES NOT DEVALUE the MLS product! Empty seats lower the value proposition for any game that they happen to exist in (MLS or CCL for that matter). Every fan in the building for the Real Esteli game probably took at least a second or two to look around and saw the vast stretches of empty seats at BMO Field and probably subconsciously asked themselves if they got hosed on the price they paid. There was too much supply and too little demand last time. And I fear that once again the club has gotten the pricing of these three games wrong, which in reality are probably more important for the immediate future of this team on the field than the remaining five MLS home games are.

I applaud Toronto FC for lowering the prices for these matches from what they were for the first Champions League match last month. However I fear that they have not lowered the prices nearly enough to fill the building the way it could be or for that matter should be.