As a day one season ticket holder this week feels fantastic … actually it was before day one if you want to be pedantic. TFC, before they were officially TFC, before they had a stadium, a team, a manager, and of course well before there were any players, had us, the thousands and thousands of year one season seat holders who put down their deposits in the fall of 2006 in preparation for the 2007 season. 9 seasons peppered with the odd moments of true joy but far too often filled with a jar of heartache, not to mention life in general, has seen those day-one-ers dwindle somewhat but for those of us who stuck with the team through all of the highs and lows, it was all worth it on Wednesday night when Sebastian Giovinco scored a goal worthy of taking the team further than its ever been in its history and for good measure, with original ‘capo’ Zac back on the stand.

There is no need to go through all the stats or recount the game, its on a million different websites right now (would be 2 million but we got pushed down the news by Joey Bats and his home run for the Blue Jays on the same night !). Instead, what I would like to address is the phenomenon that is Sebastian Giovinco and why I personally am thankful for him on several different levels.

When given a hard time about the Argos in the stands, Tim Leiwieke, erstwhile head honcho of the Reds deflected this by asking “Do you not like Seba?” I will say again Mr Leiwieke, no we do not like Seba ! We f****** love him !!! Your full legacy is yet to be written, and the Argos millstone may hang around that neck in future – we will see – but you will also be remembered for bringing in Bradley, Altidore, and even Defoe, whose failure perhaps helped get Seba here too and it is him who you will be most remembered for. He is getting a rather large chunk of change in salary, they all are, but in Seba’s case he is, as the article title says … WORTH.EVERY.PENNY !!!

For years in the stands we saw a number of DPs and ‘almost DPs’ come and go. Some were good but just not good enough, some we would have liked to have kept but MLS rules made it hard, some got injured and retired before we really had a chance to see them at their best, and others – Jermain Defoe in particular – were abject failures. Yes he scored some goals, but his TFC career was over in his mind when he did not make the World Cup squad and was then somehow injured for most of the rest of the season. On those occasions, discussions with friends centred around teams like LA Galaxy and the Red Bulls and how they could manage to get high profile players who seemed to want to be where they were, saw out their contracts, and

contributed to their teams success. Oh to have a player like David Beckham or Thierry Henry at TFC !!! 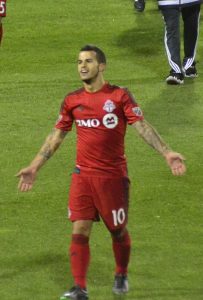 Apart from the skill, the goals, the infectious smile, and the sheer joy he seems to exude, this is why I personally enjoy Seba so much. He seems to WANT to be here and will make herculean efforts to do so. We have seen his energy, his drive and his enthusiasm all season. We have seen him make other players better just by being on the field (Jonathan Osorio anyone?) and on Wednesday night he was not even supposed to be anywhere near
BMO field after playing two sub appearances for the Italian national team in the last few days (and tying his opponents up in knots there too). Indeed he was still in Italy on Wednesday morning …. but a 10 hour flight later, with texts or tweets flying back and forth between him and Greg Vanney pleading to play that night, and what must have been some TFC supporting CBSA officers getting him through Pearson quickly when he arrived around 4pm, he somehow managed to get down to BMO in rush hour, and made the bench for the 7pm kickoff of this game. THAT is dedication. THAT is the player we have longed to see here for the last 9 years. When he came on in 71 minutes to rapturous applause and then literally ripped the Red Bulls apart only seven minutes later with a goal that is surely going to be up for goal of the season, THAT made the last nine years worth all the heartache. there are only three letters needed to describe Seba and his contribution to TFC and MLS this season …..