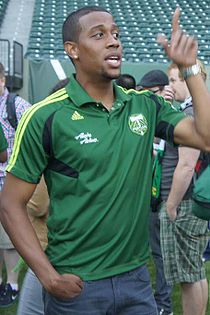 For those that have not heard yet the off season wheeling and dealing has finally begun in earnest for Toronto FC. Late Tuesday afternoon the club  announced that they had traded with FC Dallas again to acquire young defender Jeremy Hall from the Hoops in exchange for TFC’s second round selection in the 2013 MLS SuperDraft.

Here are the basic stats on Hall.

Joao Plata is the exception to the rule folks when it comes to the draft. Generally there is not often that many players taken late into the second round of the SuperDraft ever make it as MLS professionals. So in exchange for the proverbial pig in a poke Mariner/Winter pick up a player that is young and has MLS experience already. They also are picking up a player that they feel fits into their style of play and of course gives them yet another defensive option to look at for 2012. I look to players like him being perhaps another young relatively versatile defensive piece that will give the Reds some additional depth at a position that they have struggled with since year one.

Now he was not drafted out of University as a defender per se, as he played his college ball as more of winger type than as a right back. His time in MLS has seen him play of course just about exclusively as a right back at previous stops in New York, Portland and Dallas. So perhaps he fits into the the more recent type of TFC acquisition like Eric Avila and Peri Marosevic who fit the young quick and versatile mould that Winter in particular likes to have on his club. And the fact that he has the pace to play on the wing makes him perhaps a useful piece at fullback in this particular style of play that TFC is trying to implement.

He is on a bit of a high wage that is roughly what Adrian Cann was on for 2011, and that kind of makes me hold off on heaping plaudits onto this deal totally considering tha the Reds might just end up paying big money for a kid who just might turn out to be a peripheral piece at best.

What I will give some praise to is the fact that the deals to get the players the club wants in for 2012 are starting relatively early for Toronto FC, at least in comparison to the Mo era. Giving a kid like Hall the extra time to move up here and get himself settled into his new city and to get used to the TFC setup is smart. Maybe he might move up here before the end of this year which gives him a chance to settle in, get comfortable and have himself ready to go for January training camp.

So welcome to Toronto Jeremy Hall. Good luck in your new city.