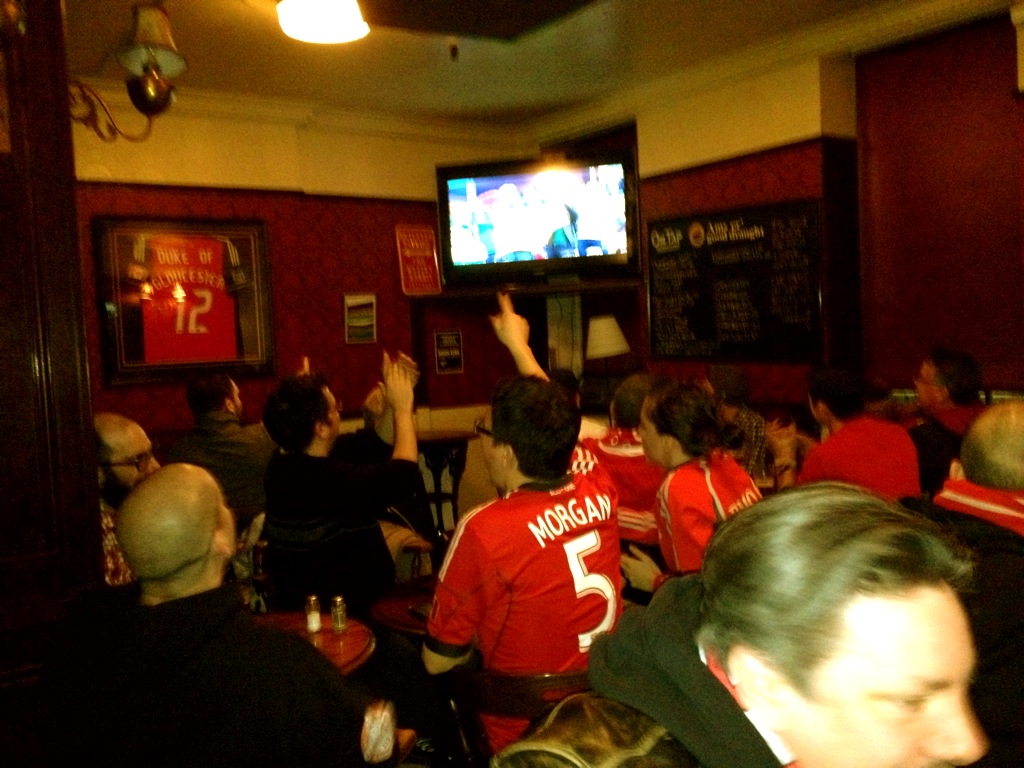 Although the main purpose of this site is to showcase photos I take at TFC games, I  will occasionally wax lyrical about some of the games, maybe throw a few stats out there, or just prattle on about nothing in particular. Today is one of those days !

Its been a cold and horrible winter (the season, not the former manager), but a healthy crowd descended on the Duke of Gloucester for TFC’s first-kick of the 2013 season.The bar staff later told me that they didnt expect quite so many, as numbers had dwindled over the last couple of seasons pretty much in line with TFC performances, but it was a welcome sight even if the lack of footy action really showed, with a few cheering on the red team in the curling shown on TV before the match!

This is TFC’s seventh season in MLS and for each of these seven seasons we have started with an away game. In the previous six season openers, we had won only once, a 2-3 squeaker in Kansas in 2009. Last year we succumbed 3-1 to Seattle, and of relevance to this game was our opening day defeat in 2011, which was also at the hands of the Whitecaps. We were thoroughly roasted 4-2 in a very one-sided game, with the Vancouver goals coming from Terry Dunfield, Eric Hassli (2), and Atiba Harris !

Checking on the stats, I was surprised to learn that we had only played a single MLS game in Vancouver prior to this one, although we had played them 5 times in the Canadian Championship out there. Regardless of the competition, its been pretty slim pickings for TFC in this fixture, that single MLS loss and 4 draws and a loss in Voyageurs Cup duty. A total of 6 goals scored and 10 conceded.

Expectations in the Duke ranged from the mildly optimistic, to full doom and gloom. A roster that had been reshaped in a hurry, with as many as six or seven signings made in the 48 hours before the game, the loss of not one but two DPs in pre-season, and no “big names” coming in as replacements were concerns I heard several times, not to mention those who had already written off the game due to our first-kick record of 1 win and 5 losses in previous seasons.

TFC handed starting debuts to 5 players in Vancouver: Joe Bendik, Kyle Bekker, Danny Califf, Robert Earnshaw & Hogan Ephraim, with 3 of them (Bekker, Earnshaw, Ephraim) also making MLS debuts. Coach Nelsen also named a further 5 new players on the 7 man bench – Agbossoumonde, Russell, Osorio, Welshman, and Morgan, none of whom had so far logged any MLS minutes. Darren O’Dea was named captain for this match, but it was not clear if he has now taken over the armband on a permanent basis, or whether it was just for this game.

The first half started brightly and TFC were the first to record chances on goal. Kyle Bekker went close just 4 minutes in and Caps goalkeeper Joe Cannon looked quite unconvincing in the early stages. Despite a lack of star power in the TFC lineup, what impressed most was the fact that throughout the first half, they seemed to be working hard and for each other and this effort seemed to nullify the Vancouver offense, who if we are honest, looked a bit more impressive on paper than TFC’s did !!! At half-time, and with the scoreline at 0-0, there was a little more optimism in the assembled band of TFC faithful in the Duke.

My own take on the first half was retweeted by a few people so I know I was not alone in my thinking: “Impressed with #tfc first half. 11 under-rated guys working as a team and battling hard #togetherness #TFClive“

Not sure whether Vancouver stepped up a gear, whether the introduction of Reo-Coker at half-time spurred them on, or whether TFC just tired a bit due to the high pace they had set in the first half, but the second half was more and more Vancouver’s and the inevitable goal came in 59 minutes. Gershon Koffie slotted it home nicely from the edge of the box past a diving Joe Bendik after some neat setup play from Young-Pyo Lee, Kenny Miller and Daigo Kobayashi.

The TFC fans in the Duke still believed we could score however … unlike last year where we succumbed to early goals and never looked like getting back into games, in this game at least, we had weathered the storm for an hour, had put together some decent chances of our own and were not out of it by a long shot …… my bet was that after Koffie, it was time for “T” … T Dunfield that is, and he very nearly made that happen with a shot from the edge of the box that sailed just a little high. In the closing stages Taylor Morgan came on for Dunfield, and Emery Welshman replaced Welshman Robbie Earnshaw but neither of the MLS debutants could haul TFC back into the game.

It finished 1-0 to the Whitecaps, but going to let two tweets that I posted at the time convey my overall thoughts …..

5mins after the game: “#TFC #TFClive : proud of you. V.good effort, just fell short. Heads up. naysayers predicted a rout, but #togetherness almost came through“

2hrs after the game (and after seeing a few negative tweets): “As a #TFC fan, am I alone in thinking they gave it all bit just came up short. Disappointed we lost but proud of our effort. #tfctillidie“