Vancouver Is All Wet 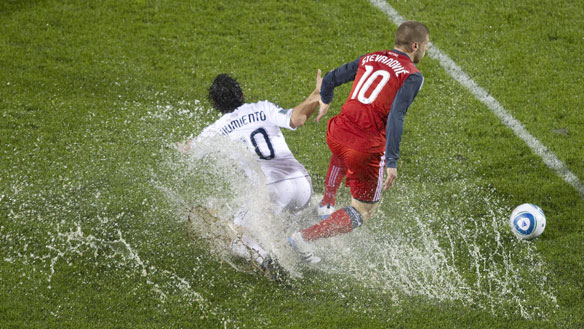 You know if the waterlogged shoe was on the other foot I probably would be feeling a little pissed off too. Picture this for a moment TFC fans. If instead last night’s game to decide who is Canadian Professional Soccer Champion was played in Vancouver instead of Toronto and TFC was up a goal when the game was called due to rain, an unplayable playing surface and lightning strikes close to the stadium, I would probably feel a little hard done by.

But I would not bleat and whinge about what I thought was a conspiracy to screw Toronto FC. I would not opine that the CSA hates TFC and is out to make sure they lose. I would not carry a chip on my shoulder that the rules for a tournament that my club freely signed off on were enforced based on the conditions on the ground and that their fair enforcement was some sort of conspiracy to do in the club I support.

I would feel unlucky. That’s where it would end. I would try to use this unlucky circumstance as a motivator and I would hope that the club I support would do the same.

But that is not what is apparently happening out west today. Here below are some selected comments from Whitecaps supporters from the public Southsiders fan message board. I think the sense of entitlement, childishness and dare I say it arrogance coming through in these posts speaks to the fact that their soccer supporter culture has a ways to go before it can be called anything near mature. Yes the Whitecaps are by North American standards a mature franchise with a history and a record of success that should be applauded. But it seems to me based on responses like those below that their fan culture is in a lot of ways still in its infancy. And infancy is what I am hearing from quotes like the ones below.

“…This will work in TFC’s advantage…Seems that all the officials, everybody conspires against us in the MLS and Nutralite, they don’t call penalty shots in our favor, we get red cards for everything, crappy biased officials and now the bloody weather in Pig Town..”

“…If Toronto wants to show some class, they can let in an early goal at the start of the game. But I doubt they’ll have that class…”

The last quote obliquely refers to a circumstance from a game in England in 2007 when in a Carling Cup game one of the players involved, Clive Clarke, had an on field heart attack that led to the match being cancelled and rescheduled. Once the game was played a second time in a moment of now famous sportsmanship Liecester City allowed Nottingham Forest to walk a ball into the net to give them the 1-0 lead they had in the original game before it was so understandably called off. With all due respect to Vancouver, these circumstances are a lot different and comparing the two, even in jest is very disrespectful. No one almost died last night, with perhaps the exception of thousands of damp TFC fans and, who knows, anyone who might have been singed by an errant lightning bolt (no reports of this happening… thank god!).

Upon getting home Wednesday evening, and after drying off, I went online to try and gauge the response to the events that transpired from both a Toronto and Vancouver perspective. And until that moment I did not consider the Whitecaps much of a rival for Toronto FC. They are thousands of miles away halfway across a huge continent. They have their petty rivalry with Montreal and their established ones with Portland and Seattle to keep them occupied. We have Montreal and (gulp) Columbus to keep us busy. But after reading the juvenile responses coming from the left coast last night I am near enough to full on loathe mode to consider them a true rival from this day on.

The comments of some of their most ardent supporters smack of the whining of a trust fund baby from an old monied family who is blathering on that they have to settle for a new BMW instead of a Bentley and that the world is out to make sure that their pampered asses are not wrapped in English leather but in German vinyl instead. Poor babies!