The following message was sent by the TFC Front Office today announcing some very strict security measures coming into effect this coming Saturday in response to some smoke and flares being set off in the southeast and northwest stands last Saturday during TFC’s 3-0 loss at home to DC United.

The new restrictions are not only going to impact the Supporters Sections and what goes on there but also the “casual” or non affiliated fan and I can tell you right now they are not going to be popular!

Here is what was sent to the supporters groups in its entirety so that ou can see for yourself what is in the cards.

In the past seasons, we talked about the need to receive from your groups any items (banners, flags, drums, bags, etc) that you wanted to bring to your sections – which are not yet under our care at the stadium – before gates open. This will now be enforced, we will receive your items at gate 3B up to 45 minutes before gates open (or the day before a game if it works best for you) and we’ll ask that you inform to us what you will be bringing to ensure we have the proper personnel to receive and bring to your sections.

At all gates, as of this Saturday, you can expect ‘searches and pat downs’ which will be taking place every game going forward.

No streamers, novelty ribbon or any items in general will be permitted under any circumstances (including goal celebrations) in the supporters sections. Anyone found throwing any item will be ejected.

Supporter Group “Capos” will continue to be allowed but we’ll need to hear from you the day before a game the name of the person that will be acting as the leader on field for us to produce an accreditation, which will need to be picked up at gate 4 (with a photo ID).

We will also reinforce the security around your sections to better ensure the safety of all patrons.

So in response to two incidents last Saturday, a smoke bomb going off in section 112 and a flare in section 127, the Front Office plans to “coincidentally” increase the security presence in the supporters sections, force the “capos” to be accredited when no such requirement was ever enforced before, force all flags and banners to be brought to the stadium early, and potentially most controversially of all start frisking and patting down every single ticket holder on the way into the stadium in some attempt to intercept a flare or a smoke bomb or a streamer.

Where to begin with this? 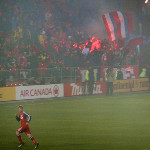 First off I am not condoning the use of the flares and/or smoke bombs in the absence of rules regulating their responsible and safe use. I have repeatedly stated in this space that I feel that when responsibly/safely used they add to the experience of all fans and that I would like to see the club and the supporters come to some sort of accommodation/arrangement that allows their responsible use. Chicago, New York and DC United all have prpgressive policies in place that allow their use safely so there are indeed policies extant in MLS worthy of consideration. Unfortunately that does not look likely to take place based on what I have heard from the club directly on this issue any time soon. Its their team after all and and if MLSE says no smoke then no smoke it is. That sucks, but those are the rules.

The other big issue for many is the fact that these changes were implemented without any significant consultations. The message above was sent to the supporters groups senior members directly earlier today as a fait accompli without as far as I can tell any discussion with them  in advance of these changes being implemented.

Not only that but to date there has been no public announcement made directed towards the thousands of ticket holders attending the Columbus game on Saturday that prepares them for longer than anticipated wait times they will likely face to get into the stadium. These intrusive pat downs by security will undoubtedly lead to large bottlenecks outside the gates and that all fans should head to BMO Field a lot earlier than usual with this in mind. How many of them will know of this without some sort of announcement in advance is beyond me. Fans not knowing about these inevitable delays are obviously not lilely going to be able to be seated in time for the start of the match and will miss out on a part of the game they have paid their hard earned dollars for through no fault of their own. And when previously done this “patting down” policy led to huge delays, crowd crushes and scuffles between security and disgruntled customers.

Perhaps the thing that disappoints me the most about this response from the club is that it not only feels like a gross overreaction to two specific incidents but that it is going to cause more problems and anger than it will accomplish any of the goals the club apparently has in mind here.

The incidents that have led to this crackdown took place in the supporters sections and yet the primary response to the situation from the club is being instituted stadium wide. Why kids and soccer moms in section 126 or older gentlemen or ladies for example in section 105 need to be offended and disrespected with a pat down on the assumption that they are crotching thermite road flares or military style pyrotechnics reminds me of the farce that is airport security in North America that see me still often forced to take off my shoes each time I board an airplane because some wing-nut named Richard Reid once tried using a shoe bomb.

Furthermore much of the goodwill that was generated between many active in the supporters groups movement and the club from the Town Hall process that started last fall is now in jeopardy of being thrown away by what I can only characterize as a significant overreaction on the part of the Front Office. And announcing these changes in security policy that could dramatically impact the supporters experience on game days without any significant consultation with supporters groups in advance can only be looked at in my eyes as a step backwards rather than forwards.

Increasing the security presence in the supporters sections I can understand as a reasonable response to what happened last Saturday. I can understand the club and its position on pyrotechnics, even though I disagree with it on principle. But specifically forcing every single supporter in their thousands to submit to this kind of security clampdown is personally offensive to me and I am sure to many others.

I admit in my time at BMO Field I have thrown a streamer or three, I have thrown a lot of curse words at opposing players and I have thrown my arms up in the air in frustration on many the occasion. But never have I thrown a beer, a cup, a bottle, a coin, a battery, a spark plug or a pyrotechnic for that matter at the pitch, at a player or at my fellow supporters. And I never ever would. Yet this coming Saturday I will have to submit to be frisked on the assumption that I am potentially a common criminal who is likely up to no good.

That offends me greatly.

And I wonder if this was the Air Canada Centre and the Maple Leafs instead of BMO Field and TFC would things be different?

Last December in a fit of pent up frustration with the continuing poor results on the ice a number of Maple Leaf fans in protest smuggled waffles into the Air Canada Centre and in a pique of collective outrage they were on a few occasions thrown on the ice in a sort of frozen pastry protest. Yet not a single Leaf fan had to submit to a pat down or a frisking on the way into the ACC from that day on in the hunt for the offensive Eggos. And if they did there would have been howls of rage and anger from the fans.

Now I am not saying that a waffle and a thermite flare are the same thing. Of course they are not. Some offending fans at the ACC were expelled and banned for throwing the frozen delights on the ice at Leaf games. Yet 17,000 other patrons did not have to turn their heads and cough in the fruitless search for more of the offending toaster treats. But at BMO Field two pyros go off and every single fan young and old are assumed to be packing gunpowder.

Maybe we all should be bringing Eggos instead.