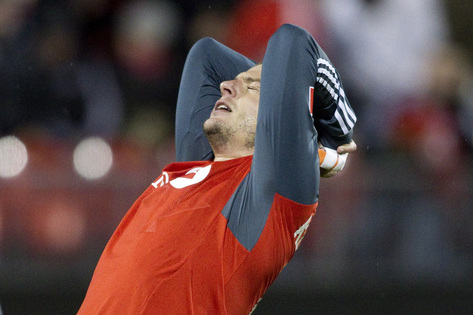 I’ve got a confession to make.

Last Saturday night I did not watch all of the Toronto FC game on TV. Actually I probably only saw half of it.

And I am deeply torn, and even a bit guilty, about not watching it in its entirety in retrospect. I was feeling a bit under the weather this past weekend and I was home with just the Pug to keep me company. The better half was working so I had no interruptions or distractions to get in the way (not that she is a distraction – TFC season seat holder she!) of watching the game, yet I kept flicking over to another channel while the game was on. You see not watching the game in its entirety was an active choice that I made, and that’s what’s bothering me.

This is the first time in five plus years of watching this team that I have knowingly missed watching Toronto FC when I have had every opportunity to do so for something other than a funeral for a family member. I have never left BMO Field before a full ninety minutes plus injury time in almost six years and I have never turned off a road game on TV before, no matter how hopeless and abject the result or effort on the field looked. And until this past weekend I never intended to.

That’s why I have not posted one of my usual post game video chats after the all too familiar road loss TFC suffered this past weekend at the hands of Dwayne De Rosario and DC United. Frankly I did not see enough of the game to pass along any insight other than what you all already know, so don’t expect one at this late date.

Anyone could probably comment though on what happened last weekend in Washington if they saw half of the game or even the “game in six minutes” feed that the club posts on TFC-TV. The Reds still are a horrible road team. There is apparent discord between players over the performance on the field that many respected TFC beat reporters are documenting in the papers and on Twitter today. Defensive miscues, including one inside the first minute of play, led to Toronto being behind with the shrill sound of the opening whistle still echoing off of the upper rafters of RFK Stadium. As soon as Danny Koevermans gives the Reds even a glimmer of hope it is snatched away again with another defensive lapse and a third DC goal. Aron Winter still apparently believes that the playoffs are possible, and DeRo is now not above shaking and baking against his hometown club. Not much else to report is there? Don’t think I missed much.

I found myself switching back and forth between the game and the History Channel kind of unconsciously as it was being broadcasted. There was some documentary on about the Luftwaffe or as Homer Simpson aptly described them once “…the Washington Generals of the History Channel…” that was relatively interesting. TFC it seems is rapidly starting to reach the levels of the designated “opponents” that the Generals are that get repeatedly beaten up and embarrassed by the basketball minstrels known as the Harlem Globetrotters. TFC are starting to look like the “Washington Generals of Major League Soccer” are they not?

And I find that I am asking myself today why am I turning away at this particular moment and not at some other time? I don’t think it’s down to that DeRo goal in the first minute either for me reaching for the remote last weekend, and the documentary was not the most brilliant thing I ever saw either. I think that I find myself starting to be without hope for this group of players and for this management structure to get things turned around in some sort of positive direction this season. Its cumulative, and not one specific incident that has led me to start thinking or feeling this way. Deep down it is the apparent absence of hope that is starting to get me and many others down.

And Wednesday night might see more of the bedrock support that this club desperately needs to hold onto start to erode if there is no Champions League nights for the hardcore to revel in like we did on those memorable evenings in recent seasons like Motagua away, Dallas Away, Cruz Azul at home and of course 50,000 at the Rogers Centre (a night that feels like an eternity ago!). Toronto goes into the Wednesday night Voyageurs Cup tilt with Vancouver with a slight advantage of course with an away goal yet I do not think that any other than the most biased TFC supporter could consider the Reds favourites to hold onto the Voyageurs Cup for a fourth consecutive season and give us Champions League nights once again.

If Toronto holds onto the Voyageurs Cup Wednesday evening those in attendance will revel in it and look ahead to some fun nights ahead with CONCACAF games to look forward to. I for one hope for the immediate future of this club that they as players and staff realize how important it is to give a full effort for the full ninety Wednesday, and with some well overdue luck, hopefully hold onto the trophy.

A loss to Vancouver means that many thousands of the bedrock supporters of this team that go on road trips, pay for and create the Tifos, wear the merch, and evangelize the team to their friends and co-workers might just start finding themselves flicking over to the proverbial documentary about the Luftwaffe rather than putting their all into their support of this club the way they always have.

Support is not about winning year in and year out. In fact it is at its core true support is ALL about enduring the tough times and the droughts between the good times that can often span decades upon decades between honours for clubs that have history spanning longer than six years. But there has to be hope for better times ahead to keep that support sustained and involved… not necessarily winning, but HOPE. No league wins and no CONCACAF nights in prospect before the end of May means that a growing number of fans and people that call themselves “supporter” might just start to drift away or not care to the extent that that they have previously because they simply do not see any hope for things getting better any time soon.

I really don’t want that for myself or for this team.

Wednesday is a true watershed moment for this team as it is currently constructed on and off the field. And how the result turns out might be one of the more historically important moments in the short history of Toronto FC when we look back upon it in the years ahead.

Unlike Saturday night past this time I won’t be looking away.