The Pitch Is Ready – Will Toronto FC Be? 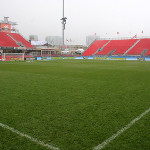 I have to say I was somewhat surprised with what I saw in a brief sojourn to BMO Field on Friday to check out training and see the field ahead of Saturday’s home match versus Eastern division rivals the Philadelphia Union.

After the torrential downpour on Wednesday that was a contributing factor in the game being cancelled/rescheduled I frankly was very concerned with how the playing surface at BMO came through the beating it must have surely taken from the players and the rain. And TFC officials were gracious enough to give me a few minutes Friday afternoon to go out and take a few pictures of the surface and see how it came through the great flood of 2011.

And it came through surprisingly well. There are no major problems with the surface at all as of Friday. In fact a senior TFC front office official told me that the underground drainage system installed last season as part of the conversion to a grass field was working perfectly on Wednesday but the reason why there was so much water on the pitch was that the rate of water draining through the grass surface into the drainage system was slower than the rate at with which it could pull the water out. He told me that on Thursday one groundskeeper took a pitchfork and stuck it into a pool of standing water on the surface and once done it immediately drained the standing water completely.

And working at full capacity since then the field has dried off and is looking like it is not going to be an issue at game time. Here is a picture I took Friday confirming this. There are more shots posted on by Twitter feed at http://twitpic.com/photos/bgnewf

MLS rookie official Niko Bratsis is in charge for the match Saturday. I am always hopeful that each new official we see might be the the anti-Toledo and you never know until you se them for yourselves I guess.  In one MLS game Bratsis officiated to date he called 21 fouls, no penalties or red cards awarded, but a worrisome five yellow cards handed out. Once again it might just be the referee being the story instead of a footnote as they should be if they do a good job and go mostly unnoticed as they should.

Philly is an interesting opponent for TFC right now in that they have trouble scoring yet they have really tightened things up at the back and are winning a lot of 1-0 games and scratching out a lot of draws. However their road form in the last three matches has been poor, three losses and no goals scored. Four players really stand out in my eyes and they might factor into the result on Saturday. Sebastien Le Toux was one of the best players in MLS last season yet he has not scored so far this season at anywhere near the same rate. Carlos Ruiz left Toronto with his only contribution likely to be remembered the roughly 300k he left town with for next to no return. He has scored three goals to date and has been on the sheet recently. Newcomer Faryd Mondragon has been one of the best goalkeepers in all of MLS this season. And Danny Califf is as nasty and aggressive a centre back this season as he was in 2010 when he was red carded in Philly’s single appearance in Toronto.

Alan Gordon has been upgraded from injured to “possible”. His ability to hold up the ball and to play physically against a strong Philadelphia defense would be real useful on Saturday. We will have to see if he plays.

For a much more detailed pre-game analysis please check out http://viewfromthesouthstands.com for the latest information.

And remember that tomorrow is “Support Local Football” day. After the TFC game and the Champions League match there is a TFC Academy game at Lamport Stadium that is definitely worth checking out. I am going. I hope to see many of you there.