The New Regime at TFC 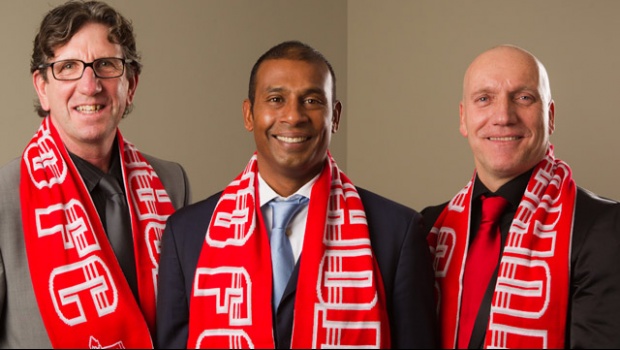 After a longer than perhaps expected process, Toronto FC announced Thursday the hirings of the three people long expected to take over the club going forward. They of course are led by Aron Winter (The “W” in Winter is pronounced like a “V”), hired as Head Coach and Technical Director. His assistant will be former Ajax Amsterdam Youth Academy coach Bob de Klerk,and to provide the MLS experience and knowledge these two lack Paul Mariner has been officially hired as Director of Player development, responsible for getting the Dutchmen up to speed on all things MLS along with scouting/signing players and with overseeing the operations of the Academy.

Current staffers Earl Cochrane, Jim Brennan, Danny Dichio, Nick Dasovic and Stuart Neely are all sticking around. Cochrane will be Director of Player Personel and Neely will continue his work with the TFC Academy. There was no word from the club as to the specific roles envisaged for Brennanm Dichio or Dasovic. As well there was no word at all if Preki’s former assistant Leo Percovich (who was kept on after Preki was fired last September) is going to remain with the team going forward.

Here is the link for all the specifics from the club: http://tinyurl.com/33ktvho

So this is a good day, a day long coming, but a good day to be a TFC fan nonetheless. We now have a much clearer idea as to what this club wants to be going forward. And we can start thinking in earnest about the season ahead.

There were two pressing issues surrounding players that the club addressed briefly today as well. On the De Rosario to Celtic saga Tom Anselmi briefly touched on what in his mind has happened and perhaps most importantly that he expects DeRo to be back with the club in late January for the start of training camp. Basically he did not reveal anything from the club’s perspective that was not already said before. There was no words spoken on if there were any negotiations with the player

about his compensation or with Celtic for that matter for a loan deal or a transfer. As well there were no negatives hurled Dwayne’s way either. So if TFC is to be believed they plan on having DeRo in camp later this month and that his chance to transfer overseas (if there ever was on) has essentially passed by.

De Rosario did Tweet the link to the press conference today on Twitter so he obviously knows what is happening. Hopefully he will soon see fit to speak to the press in Toronto directly with his side of the story and what he feels needs to happen going forward. I am sure the club wants to have this addressed soon as well considering the scope of the work ahead and with only ten weeks to do it before First Kick.

The other player issue addressed was the injury to midfielder Julian de Guzman. The Globe & Mail reported today (http://tinyurl.com/2ea4zfx) that de Guzman suffered a torn meniscus in his knee in August that completely tore away at the end of the season in October. He went on to have surgery and according to the club he is expected to make a full recovery before the start of the 2011season. Whether this comes true or not is hard to estimate again until we hear from the player directly, who is currently in Spain with his family. Knee injuries are notoriously hard to diagnose with exact certainty. But again if taken for face value, the club says he will be back soon. It might be nice to also hear from the club and player on why the surgery was not done as soon as TFC was eliminated from the playoffs and the Champions League last fall  in order to minimize any time the player would be away from the game.

One of the more interesting aspects of the coverage today was an interview with Jürgen Klinsmann that was done just after the press conference. Earlier on Tom Anselmi used the phrase “Leadership Team” over and over again in his prepared remarks. He also intimated that the role of Jürgen Klinsmann was large in helping the club decide what kind of approach it wanted to take going forward. In the interview Klinsmann stated that the consensus around the club was that they envisioned the club playing a possession based game and with that decided it was then a matter of going out and finding the right kind of leadership team to implement it. Now it is up to them to find the right kind of players to play it.

The fact that TFC now arguably has one of the best group of minds in MLS when it comes to running an Academy also speaks to the approach Klinsmann wanted this team to take. Winter and de Klerk worked at the world famous Ajax Academy. Cochrane and Neely have been part of the TFC Academy since its inception. And Paul Mariner will not only be working on player acquisition but he also will be overseeing all Academy operations as well. All of this brain power and experience dedicated to Academy issues tells me that the plans for a permanent home for the academy might be further along than we all may know, and long term tells me that TFC/MLSE feel that is is the smart play to not depend on the NCAA or the transfer window for players going forward. On an aside this can only be a good day for Canadian Soccer as well with the club putting such apparent efforts and money into developing the new generations of Canadian talent.

At it’s heart this is a simple game with simple concepts, simple tactics and simple rules. A good coach in Holland that knows the sport at a high level can coach in MLS as well as he can anywhere else. The salary cap, allocation dollars, and the SuperDraft are not part of the planning a coach needs to do for a particular game. These and many other factors come into play when you are building a team, but not when you are coaching the team. That is why I am not terribly concerned that Winter and De Klerk have no MLS experience.

So overall a good day for the club, we as fans got some glimpses as to what the owners want the club to be in years ahead and TFC have a lot more footy IQ on hand today than ever before.