The Dream Ends – Now Back to The Nightmare 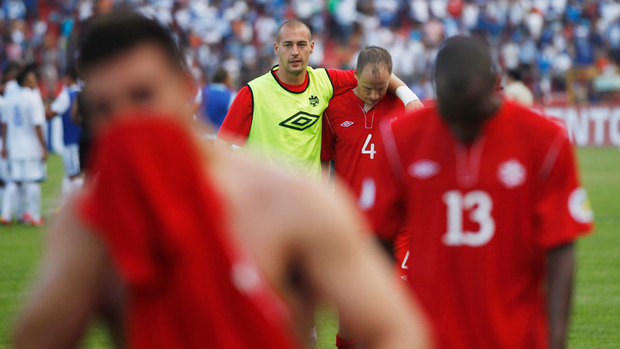 This blog is supposed to only document my travails and thoughts surrounding all things TFC. In this post I am going to take a slight detour to Honduras before bringing it all back to the cold reality that is this lost season now fast winding down.

The Canadian Men’s National Team’s campaign to try and qualify for the Hex and for possible qualification for the FIFA World Cup in Brazil in two years time as we all know by now came crashing down Tuesday afternoon on the back of a disorganized and dare I say gutless display that saw our nation’s best players (not including those suspended or injured) get embarrassed and eliminated 8-1 by Honduras.

Now the reason why I mention this on what is ostensibly a TFC oriented platform is for the simple reason that it has been the travails and dare I say even hope that the National Team brought to me at times in this qualification campaign that actually allowed me to cope with the absolute disaster and shambles that Toronto FC has become on virtually every level this season. The National Team has been a distraction, and until yesterday, mostly a welcome one, from the usual nightmares of supporting Toronto Football Club. The energy in the stands at BMO Field during National Team games in this campaign served as a reminder of what going to a game in Toronto used to be like and what hopefully it can be like again. It was fun seeing so many of my friends who have either been beaten down into silence or who have simply stopped coming to TFC games in the stands and re-energized by the other boys in Red.

With the Brazil 2014 pipe dream now over the cold hard reality of the mess that is all things Toronto FC is now back at the front of my mind.

And what a mess it all is:

So the ugliness returns in full on Saturday.

It sucks indeed that the National Team did its best to try and impersonate TFC at the Meadowlands in 2009 and even exceed them on Tuesday, but at least they provided a welcome distraction this past year that did a lot to help many of us keep our supporter fires burning long after our club let us down again so very very badly.

So thanks for something Canadian Men’s National Team. And thanks for a lot less Toronto FC.