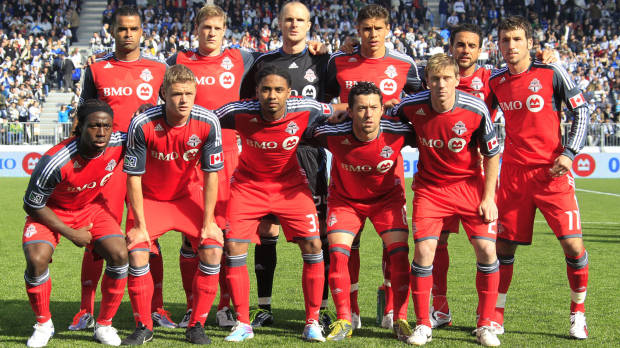 To steal a line (with permission) from a friend with whom I watched Saturday’s TFC season opener, a 4-2 loss to Vancouver:

… “I had low expectations going into this game. They were not met“…

And there were a lot of things that became obvious last evening in Toronto FC’s performance that will be reasons for worry going forward, and I will get to them in a bit.

First off I want to congratulate Vancouver on a good win and a solid performance. They were well organized at the back and played a strong physical game that TFC simply appeared either unwilling or unable to counter. Getting two goals out of their DP is something TFC fans never got out of Mista so kudos to what appears to have been a nice piece of business in signing Hassli. The atmosphere in their ground looks excellent and the fans have something now to hold onto no matter how this season ends up for them. But enough about them, back to the business at hand.

Maicon Santos scored a wonderful goal from about twenty yards out to get TFC back in the game late and he also earlier on provided a great through ball to DeRo that got TFC on the board in the first half. He was somewhat non existent for long stretches of the match but those two small moments of individual quality were excellent. That is definitely something positive to take away from this game. He is going to be counted upon to perform this year and he for one can leave Vancouver with his head held high.

For the first 30 minutes or so in this match Toronto was looking to me the better side, even being down a goal early on. The ball was moved around the pitch sharply and crisply. Players were making smart runs off the ball to create openings and options to move the ball around. The relatively unknown Dutch wingers Soolsma and Martina in particular looked to have some great touches that gave Toronto a width that their attack has lacked from day one.

Yet from that point on things changed. The possession numbers the club had (well over 60% possession) became meaningless possession that went nowhere. Tossing the ball around in their own end time after time after time looking for an outlet forward was the order of the day. And perhaps most importantly Vancouver decided to take the game to Toronto physically. And I did not see TFC having any response to it.

MLS is a physical league. The players are strong and there is a hard nosed edge to the game over here that many European players and coaches are perhaps unfamiliar with. Vancouver consistently out-hustled and overpowered Toronto off the ball time after time as the game wore on.

And dare I say it, after four hard years Toronto FC still has not solved their issues from day one they they have at the back. The defense had Gargan and Cann, neither noted for their mobility playing at full back and Nana Attakora and Ty Harden filled the centre back positions and nary a one of them looked remotely up to the task. This 4-3-3 style of play requires full backs with pace and solid positioning that can start the attack from an advantageous position and still get back in time to take care of business defensively. Gargan in particular looked really weak and was the primary cause of Vancouver’s third (winning goal). And the high line TFC’s four defenders chose to take led directly to two goals including an embarrassing three man breakaway that led to Vancouver’s fourth goal of the day.

Aron Winter spoke after the game to the press and stated that he felt hard done by the the officials. I disagree. Paul Ward was not the reason TFC lost last evening. Toronto FC was manhandled off the ball by a club of larger physical stature that chose to bully them off the ball without any significant reply from the Reds. I fear that this will be the playbook that opposition managers will be reading today.

Portland comes to town Saturday and I expect much of the same style of game from the Timbers as we saw from the Whitecaps. Whether Aron Winter has answers and whether the TFC roster has players on it with the heart to compete in a physical league remains to be seen.