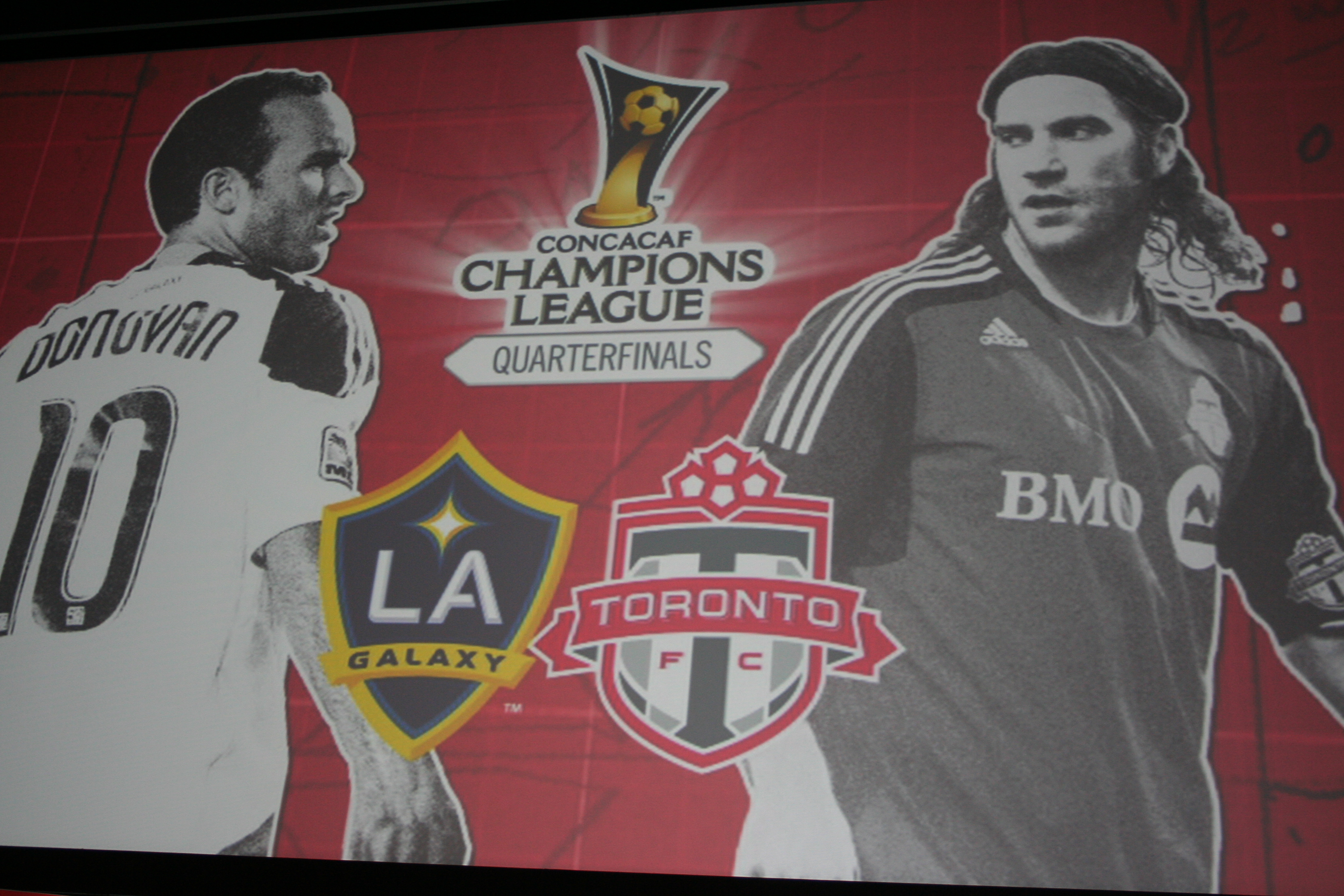 Toronto FC turned on the charm offensive Friday morning at Real Sports Bar & Grill next door to the Air Canada Center as they kicked off officially the upcoming ticket blitz for the Champions League Quarter Final First Leg March 7th at the Rogers Centre.

In attendance were alumni Danny Dichio and Jimmy Brennan along with players such as Cordon, Makubuya, Henry, Morgan, Koevermans, Stinson and Stefan Frei fresh back from his training stint in Liverpool. I must confess it was pretty cool having a designated player like Koevermans serve me pancakes today!

Aron Winter said a few words to the assembled supporters where he confirmed that negotiations for the return of Joao Plata and Richard Eckersley are continuing and that to date there is nothing else to report on getting them secured for 2012 and perhaps beyond. Winter did state that his intent is to bring them both back if deals can be secured.

He also officially confirmed for the gathered faithful that the rumour about Thomas Rongren taking over the reigns of the TFC Academy as a replacement for the recently departed Stuart Neely are indeed correct. And he expressed excitement about next week’s SuperDraft in Kansas City where TFC holds two first round picks (one of them from the De Rosario trade). Expect perhaps one or even two Generation Adidas players coming to Toronto. Winter and the coaching staff are soon headi

ng off of course to the MLS Combine for a scouting session ahead of the draft.

TFC’s Front Office head honcho Paul Beirne then announced that tickets for the general public will go on sale next Friday January 13th and that starting Monday January 9th season seat holders will have an advance opportunity to literally buy as many seats as they wish before they then get offered to fans on the waiting list for season tickets and then get thrown open to all comers next Friday.

Official details are coming later Friday but to their credit the  tickets will start as low as $10 with the priciest seats in the house near the benches being in the $60 range.

Paul also confirmed that the club’s 2012 season ticket renewal campaign went well and that as it stands today TFC has the second largest number of season ticket holders in all of Major League Soccer next only to Seattle who of course play in a stadium with well over 30,000 seats for soccer.

Overshadowing much of the news from Toronto today about the Champions League fixture in March was breaking news out of Germany that will have a dramatic impact on TFC’s chances of qualification for the next round of the CCL. In literally his first practice with FC Nurnberg of the Bundesliga where he was on a training stint, Galaxy defender and arguably their most important player Omar Gonzalez blew out his ACL and will be sidelined for likely what will be the rest of the MLS season.

Gonzalez is reigning MLS Defender of the year and his central defense partnership with former Red Todd Dunivant was a large part of why the Galaxy were able to win the MLS Cup and get to the knockout stages of the Champions League themselves. With him in the lineup TFC would have a real challenge on their hands getting goals. With him out of the lineup TFC’s chances all of a sudden look significantly brighter.

And as an aside if I was a Galaxy season ticket holder today I would be screaming blue bloody murder over this! It’s twice now that Galaxy players have picked season ending injuries overseas while on loan or training in Europe, the other of course famously being David Beckham (coincidentally the same type of injury as Gonzalez picked up Friday) in his second stint with AC Milan back in 2009.

Landon Donovan is currently playing back at Everton on loan for the second time and word out of Birmingham is that Aston Villa are keen (pun intended!) to secure Robbie Keane on loan until the start of the MLS season in March. After what happened to Gonzalez Friday I hope MLS finally realizes that not only is there the risk of the product they are putting on display in this league being damaged when these star players go overseas on loan but that they are also literally slapping their paying customers in the face by depriving them of a player of the quality of an Omar Gonzalaz when they go down to injury away from their own club.

There is one thing to have a player injured (which is bad enough) when they are playing for their own club. It is certainly worse when they get injured playing elsewhere. I would love to ask Don Garber today what he sees MLS getting out of these loan deals. Because today it looks like a great loss rather than a great gain for Major League Soccer.