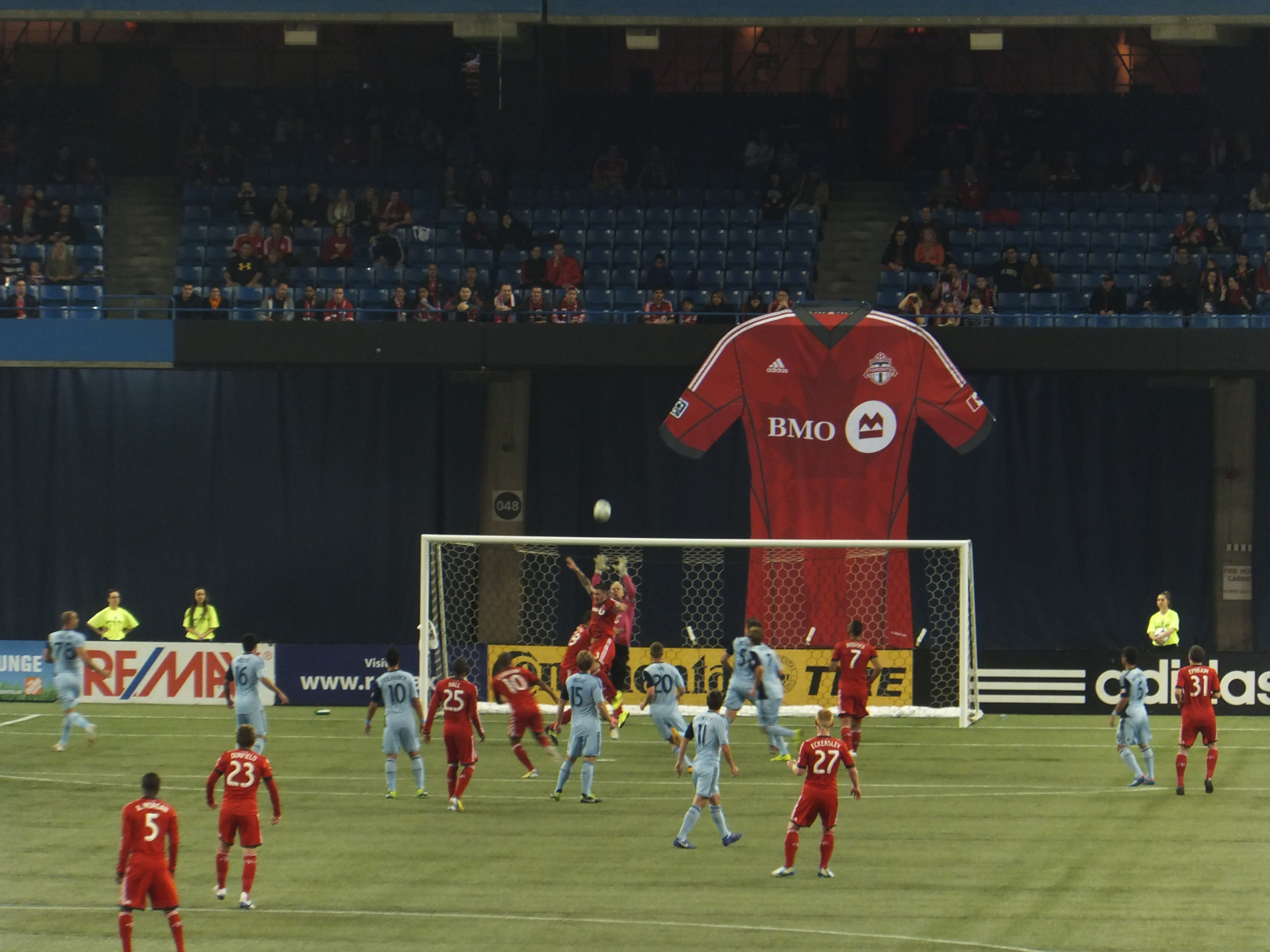 It wasn’t quite the 47,000+ that had viewed TFC against LA in the Champions League last year, but the announced crowd of 25,991 for Saturday’s TFC -V- Kansas City game did break TFC’s home attendance record in MLS, eclipsing the previous record of 22,453 set at BMO field on Apr 13th 2011 against LA Galaxy.

The (almost) 26K present for this match also witnessed the first MLS victory by TFC since July 18th 2012, a run of 15 games. This was also a record for TFC albeit an unwanted one. We went 12 games without a win during the 2007 MLS campaign, and managed a 13 game winless streak over the end of the 2011 season and start of the 2012 season but we capped 2012 off with 14 winless games and added to our streak last week. Its great to have that monkey off our back so early, and our first 3 points in the bag 8 games earlier than last year !!!

Lets get the rant out of the way first !!!

I have to say that I really do dislike watching football at the Rogers Centre, even if we are undefeated there as some wag pointed out after the game !!! Its a TFC competitive match so of course I will go along, but I hate it !! The sight-lines are not great, the team has to enter from the corner not the half-way line like almost every other stadium, the security can be fairly draconian, and it is just a horrible concrete mausoleum of a place to watch football. It may be ok for Baseball, I would hope so given that it was constructed for that purpose, but for footie, not so much.

Again on Saturday, it was the same, an insanely early kick-off, a corporate march to the corporate ballpark, and the fans as far away from the plastic field as you can get. The fact that there was enough space to create a mini Kia showroom behind the goal tells its own story. Security also seemed to be doing its Rogers Centre normal too ! Not sure why – and maybe there was a good reason – but it seems that drums were a problem in the supporters section for this game. At least two sets were confiscated in 119/120 area. why let them in in the first place if it was a problem? Or was it because the Tribal Rhythm Nation were positioned in the concourse nearby and didn’t want any competition !!!

[singlepic id=10823 w=320 h=240 float=right]Camera Policy is also a little sketchy for the Dome, which is why this week’s gallery is not up to the usual standard and I struggled to find 35 usable pics. Rather than bringing the Nikon, and finding it (and myself) going the way of the drums, I stuck with my trusty little compact F550EXR but the poor thing doesn’t do well in dodgy light in dodgy stadiums !

You can find the gallery HERE, but I apologize in advance for some blurred shots.

Ok, rant over, and onto more pleasant things. First noticeable thing was the lineup. Only a single change in the starting XI with newly signed Bostock coming in and Bekker dropping to the bench. Might we see some lineup consistency this year? Too early to tell, but no knee jerk reaction to the loss in Vancouver, which was good.

Make no mistake, Kansas might not sound like a glamour game to the uninitiated, but this was a team coming to Toronto after winning the East last season, a mere 40 points ahead of TFC, and currently in the midst of a 13 game (regular season) winning streak, something TFC dare not even dream about just yet ! They had also won the last 4 games between the teams, including all three in the 2012 season. TFC on the other hand have been setting records at the other end of the scale and the latest on the horizon was that we were just 3 games away from equalling the all-time MLS ‘winless’ record of 18 set by RSL in 2005/6. You would have to be a fool to predict a TFC win … wouldn’t you ? … or at the very least a die-hard, dyed-in-the-wool TFC fan !

There was only one player making his MLS starting debut in this game for TFC and that was recent arrival on loan from Spurs, John Bostock. However, of the remaining 10 on the field, Bendik, Califf, Earnshaw, & Ephraim all made their home debuts in the starting lineup and subs Bekker, Osorio and Russell took the tally to 8 new players for the TFC faithful to watch over the course of the game.

So lets look at the new guys in a very unscientific way:

[singlepic id=10833 w=320 h=240 float=left]Joe Bendik: has looked solid in both games he has played and made a couple of crucial saves late on in this match. Stefan Frei will undoubtedly be the #1 when his face heals, but Bendik has shown that once again, TFC have good depth in the GK area.

John Bostock: Had a solid 85 minutes and looked very creative out wide. He earned the penalty that Earnshaw converted and all in all the 21 year old looks like he may be a handful for MLS defences to get to grips with.

Danny Califf: Looks like TFC finally has a centre back pairing ! The double-Ds – Danny and Darren – look solid at the back and can also mix it up a bit going forward. Califf (or ‘elbows’ as one of my friends calls him) has plenty of MLS experience and looks assured. Apparently (according to another friend who met him at a recent TFC event) he is also a very personable chap ! … and he follows @TFCpics on Twitter so he has to be a good guy !

Robert Earnshaw: As far as I am aware, only one other player has scored twice on their home debut and that was Javier Martina. Earnshaw’s goals were perhaps not as impressive as JM’s but for a success starved fan-base, his two goals and somersaulting celebration have already given him cult status. He looked lively last week too, so here’s hoping his flame burns long and bright at TFC and doesn’t fizzle and falter like Javier ! The thought of an Earnshaw / Koevermans partnership is also quite exciting.

Hogan Ephraim: I haven’t really formed an opinion about Hogan yet. Maybe its because I was paying attention to the other new guys and he hasn’t really come into focus so far, but that also means he hasn’t made any glaring mistakes that draw howls of derision. He was however central to the move that saw Earnshaw score his first on Saturday. He put the KC defender (Besler) under pressure, prompting the bad attempted pass to Collin which Earnshaw stole and slotted home.

Kyle Bekker, Jonathan Osorio, & Darel Russell: After a  combined total of 16 minutes in the home opener it would be cruel to judge the three subs on display, but Bekker did enough last week to earn a huge ovation when he came on (part of which was probably because he is from the GTA as well), Osorio is an Academy grad who people say a lot of good things about, and Russell is tall, really tall !

Good Points: We won !!! no, its not a misprint, we actually went and goddamn won a game this early in the season. We look solid at the back (in the first half at least), we look workmanlike in midfield and in Earnshaw, we may have a striker that can score some goals …

Cause for Concern: Second half performance. Last week in Vancouver we came out of the gates very quickly and pegged back what looked to be a superior whitecaps team for the entire half. In the second half we seemed to be back to a little of the “same old” TFC and hung on for 15 minutes before they scored and the game was ostensibly lost. We did try hard, but we couldnt get it done.

A loss last week was probably not all that surprising given that most of our players were so new to each other they may have had to wear name badges in the dressing room, but this past weekend also had some similarities. We came out hard and strong, scored in 3 minutes and then again in 21, and played some nice football. The second half was a different story. KC had the upper hand and but for some desperate defending, and a few good touches from Joe Bendik we could have been bemoaning another valiant effort that TFC lost or tied at the death.

Time to Panic?: Absolutely not. We have played two good sides (Vancouver will likely be in playoff contention again this season and KC won the East last year) and have come away with a narrow away defeat and a narrow home win. Unlike the 2012 TFC vintage we also managed to see out the last 10 minutes of regulation time and 5 minutes of stoppage time (where did that come from?) without turning victory into defeat or a draw.  We look like we will only get better once other players return, or as the current squad gel with each other and lets remember, we are already 3 points better off than we were after 9 games of the 2012 season !