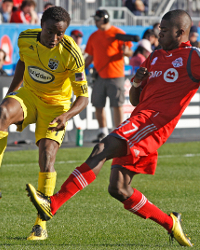 Sad news out of Toronto FC today as the club announced that recent Academy graduate/winger Nicholas Lindsay has been lost for the entire 2011 season before a ball is even kicked. Picking up a serious knee injury recently during this off season Lindsay is scheduled for two knee surgeries, one relatively soon and another in about five of six months from now that will take him out of Toronto FC’s plans for 2011.  Without knowing much more about exactly what happened and what his prognosis is, one might speculate that having to have two surgeries to correct the problem could potentially put his nascent career into some doubt. Hopefully that is not the case.

In this space I have commented a great deal about how I feel that one of the most glaring missing pieces for Toronto FC since just about day one on the field was the lack of solid wing play. At times the club has had good midfielders and good strikers who went on to play better elsewhere than they did in Toronto and in my humble opinion this was the case because TFC had neither enough skill or pace on the wings to link up play properly between midfield and up top to the strikers, nor enough width to creatively work the ball out wide.

Now in those dark days late last season there was probably no brighter development then the graduation from the TFC Academy Nicholas Lindsay. Not only did he show what was possible from the Academy going forward, he also showed glimpses of potentially being part of the answer to the lack of wing play from TFC that made their offense so predictable and relatively easy for opponents to defend against game after game.

One Nicholas Lindsay moment stands out for me in particular on the field and that was the mid October home game versus Columbus. Lindsay literally ran rings around Robbie Rogers from Columbus (a bit of a speed merchant himself), and in one particular run down the left flank he put a lovely weighted ball on the grass through the box to Jacob Peterson who calmly put the ball into the back of the net.

Lindsay is just seventeen so he is young and with luck has a long career ahead of him. Hopefully this is the only kind of banana skin TFC faces on the injury front this pre-season and I am sure we all hope he makes a speedy recovery.

Good luck with the surgeries and the rehab kid! We all look forward to seeing you in 2012.