Slightly Early For A “Wall of Honour” Isn’t It? 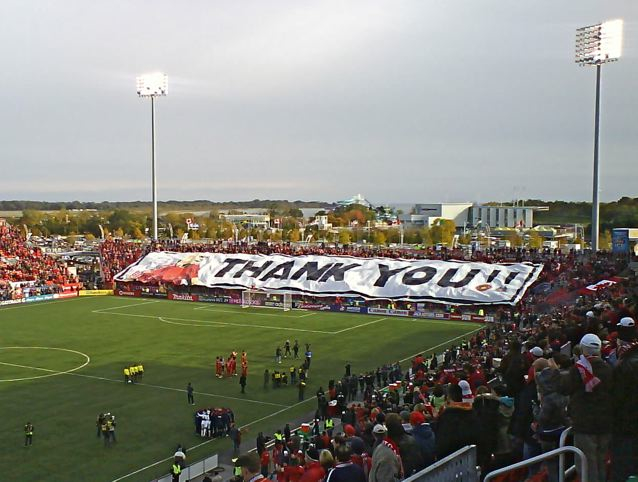 TFC Director of Business Operations, one Mr. Paul Bierne, has always said that from the start of Toronto FC the club has always tried to provide what they call an “authentic” soccer experience at BMO Field. And in many ways they have succeeded.

They have resisted going for the “Soccer Mom” crowd that other MLS franchises have marketed themselves. There are no cheerleaders or pizza giveaways. And finally this year we have a grass pitch in our soccer specific stadium. Toronto FC has been according to Don Garber the template that new clubs coming into the league should strive to emulate. The game day experience for fans is a real one.

Last Thursday at the Home Opener Toronto FC unveiled its “Wall Of Honour” with the first member honoured being recently retired former TFC Captain Jim Brennan. Jimmy was our first player and our first captain and leads the club in minutes played. He is deserving of recognition from the club for his contributions. But a “Wall Of Honour”? Does it not feel a little early to be starting one?

This did not feel “authentic” to me.

I am not going to debate the merits of honouring or not honouring Jimmy Brennan as an individual. It’s not about that. What I do want to ask is if a club in its fourth season that has only won one thing in that time has enough of a history to warrant a “Wall Of Honour”? Ten years from now perhaps might be a good time to establish this kind of institution but at year four it feels forced. I see the merit of honouring Jimmy in the years ahead but at this point it feels like it was not much of an honour at all.

I understand the club wanting to perhaps establish tradition and culture, but it has to come from the fans and not the front office in order to be real. Or at the very least it has to take place after there is enough history to honour! Let me give you an example of what an honour from the fans actually looks like.

This banner was painted by fans, paid for by fans out of their own pockets, and unveiled at the last game of last season as a way to thank a great player for his contribution. We will be singing for Danny on the 24th minute in the Supporters Sections at BMO Field forever.

The singing is authentic tradition. It is real and is based on spontaneous action. It comes from the hearts of the fans. So did the banner.

This “Wall Of Honour” came from a focus group or the Marketing Department. One is certainly much more authentic than the other.

What do you think? Comments are always welcome.