Singing in the Rain !

Today’s post will be short yet positive ! There was a lot going on in the football world on Saturday and as the day wore on the memory became hazier for some reason! First was the Scottish Cup Final, which many may not know is officially the oldest cup competition on the planet having first been awarded in 1873, then it was the English FA Cup Final, and finally, after a downpour of biblical proportions it was the TFC match against San Jose.

The Football Factory was the location for breakfast and watching my home town team taking on Falkirk in the Scottish Cup Final. I wont bore you with details, but Inverness Caledonian Thistle won it 2-1 after being reduced to 10 men to become the 25th – and longest – name on the trophy. (The name is so long they had to use a smaller font). There was a surprising TFC link in the final and that was the 95th minute substitute appearance by Taylor Morgan for Falkirk. The 2013 supplemental draft pick who made one 15 minute outing for TFC in that season’s opener made a cameo here too. After being waived by TFC he signed for Ostersunds FK in Sweden and has been on loan with Falkirk in the Scottish Championship (2nd tier) since the end of the Swedish season. Luckily (for me) his 90 second appearance didnt change the game !

After this game it was the Arsenal – Villa FA Cup final and whereas the Scottish Final was entertaining and close right up to the end, this was a walk in the park for Arsene Wenger’s men who won their record setting 12th FA Cup (and Arsene Wenger’s record tying 6th FA Cup). I am sure Tim will maybe mention Arsenal if he does a video blog this week so we will leave that to him.

And so to BMO …. via Shoeless Joe’s to avoid the downpour. When we reached BMO the game was delayed as thunder, lightning and rain circled the stadium. Kurt Larson from the Sun posted the video below on Twitter.

It looked for a very short time that the game might be in danger but in the end kick-off was only delayed by about 25 minutes. The rain did however thin out the crowd and those who were left were pretty boisterous.

After such a long day to this point the game was a bit of an enjoyable blur. It always seems to happen in the rain … you (or I) pay more attention to talking to friends about the horrible weather and ensuring the camera is dry and ok than I do to paying attention to whats going on on the park.

Suffice to say that this was yet another Giovinco show, although this week he did have several able assistants in the form of Justin Morrow, Warren Creavalle, and Luke Moore. Seba is consistently and game-changingly good every week and it seems that with each passing week as his team-mates continue to play alongside him and get more and more understanding of where he will be and what he may do that they are also starting to look better. In 15 minutes Seba twisted the San Jose defence inside out but was kept out by the crossbar. 5 minutes later and he turned provider for Justin Morrow. Some nice interplay from Morgan, Osorio, and Giovinco saw the Atomic Ant doing a stepover in the box then firing a cross along the six yard box that Morrow got his head to to make it 1-0. 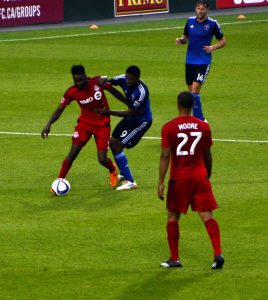 Barely 2 minutes later and it was 1-1. Fotis Bazakos adjudged Morgan to have handled in the box after Wondolowski aimed a powerful header netbound (insert argument here about man playing ball or vice-versa) and the same player made no mistake from the spot for his 101st MLS goal.

I havent really warmed to Warren Creavalle yet, but perhaps I am not giving him a fair shake. In 33 minutes, Nyassi was fouled by Giovinco on the edge of the box with nothing given, the ball then fell to Luke Moore who laid it off to Creavalle who hit a stunning ‘daisycutter’ from the edge of the ‘D’. 2-1 to the good guys !

In 70 minutes, it was Giovinco once again acting as provider. A quick Bradley pass from the edge of the centre circle found Giovinco running into space on the 18 yard line and he laid a low pass across the box which Luke Moore directed in from close range. 3-1 to the Reds.

In the closing stages Giovinco had even more chances, both for himself and and also selflessly trying to setup both Bradley and Osorio but the 4th goal would not come. A 4th would have equalled TFC’s MLS record of most goals scored at home in an MLS match (we have done this 4 times, but not since 2012) but we had to settle for our first set of back to back BMO Field wins since October 2014.

What an enjoyable day, despite the rain, thunder, and everything else !!!

[oh, and camerawatch this week ? …. very strange …. bigger bag, smaller hassle ! Lets chalk this one up to the weather and see what happens next game]

Gallery from this game: HERE

Videos from the game: