It wasn’t supposed to be this way !!! TFC had endured a two-month road trip that had seen us win in Vancouver then drop 4 straight games, before bouncing back and winning the final two away games of our opening stretch in Orlando and Philly ahead of our return to BMO for the home opener. With the fans streaming into a newly revamped stadium and bringing with them a sense of optimism borne of these last two victories and in no small measure a desperation and renewed hope for some quality football after an elongated winter hiatus it was going to be a good day wasn’t it? Heck, even the weather was behaving despite the forecast.

We shouldn’t have bothered ! TFC should have been buoyed by the record BMO Field crowd of 30,000+ and motivation should not have been an issue but too many players seemed disinterested. How can you be disinterested playing in front of 30,000 fans in your home stadium every one of whom are willing you to perform to your capability? What motivates you if that doesn’t?

The first half was a game of chess with neither side taking it by the scruff of the neck and little to cheer. Coach Vanney would latter call it “passive”. Long suffering supporters might have another few ‘p’ words to describe it including ‘pathetic’ and ‘p***’ !

Just on the stroke of half-time Michael Bradley – largely ineffective throughout this game – made his biggest contribution to the match in sliding into Beasley in a tackle that saw Penso point to the spot. Bradley would later apologise for the tackle saying he let the team down, but at the time I do have to say from my vantage point in 113, directly in front of the tackle, Beasley made the most of it. Referee Chris Penso had no hesitation in pointing to the spot and that may have been about the only decision he got right all day .. with some supporters even wishing for 4th official Silviu Petrescu to take charge somehow. You know things are bad when that happens !

Boniek Garcia stepped up to take the penalty kick but Konopka saved it and that’s how the stat will read despite Garcia managing to net the rebound. HT: TFC 0-1 Houston

Into the second half and if there were any debate about the penalty that led to Houston’s first goal there was absolutely none about the second goal. On a breakaway after regaining possession from TFC, Giles Barnes ran half the length of the pitch leaving first Bradley, then Perquis and Hagglund in his wake before slotting a pass to Will Bruin who made no mistake in making it 0-2. In popular terminology they simply “ripped us a new one” from one end of the pitch to the other ! It was a deserved, and well-taken goal (unfortunately).

TFC did get a goal back but it was too little too late. A Jonathan Osorio cross found the head of Altidore and he powered it home, but trying for the final 15 minutes out of 90 will not often win games and this was proved true here.

On the TFC website they do a mini-feature every week with 3 ‘takeaways’ from the game …. well, here are mine for this week … focusing on the fan experience (or my experience).

Apparently TFC camera policy has changed and ‘larger’ Digital SLR cameras are no longer allowed … or so I was told when getting the third degree by security entering the stadium with my wife and 21 month old son. This I hasten to add is despite them not appearing on the ‘prohibited list’ on the TFC or BMO Field websites and the text still reading “The BMO Field camera policy is different for each event, based on the requests of the teams or promoters. For Toronto FC matches, non-flash still photography and small handheld video cameras are permitted. Still photos or video must be for personal use only“. I periodically check these pages due to past problems and I think I still fit into that category given that this site is not for profit and no photos are for commercial purposes. Funny that the only time I seem to get this issue (or get it most often) is at gate 3B and usually moreso at the start of each season. TFC please clarify this policy or train your guys at 3B to be aware of your own rules! 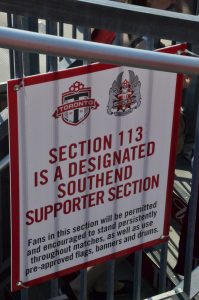 I love the waving of flags, and the generation of atmosphere and I have no issue with U-Sector, Inebriatti, Red Patch or anyone else waving them through most of the game, but can we keep the same arrangement we have had for years? Wave them briefly during the game but retract them so people can see the action when it is in front of the area where the flags are located! Too many times in this game there was goalmouth action and the capo orchestrating the flag waving in 115 had the guys in such a frenzy that the view of most of the south end viewers would have been blocked. and before anyone says it, or calls me a crotchety old fart, I know its the supporters section and our view may be obscured from time to time due to standing, jumping around or indeed flags and banners but since day one all of the supporters groups have followed that simple ethos …. and it seemed to work for everyone

I was not able to get a great look at the facilities due to taking my wife and young child to this mothers’ day game but the new stand looks impressive (if steep) and feedback I heard from others regarding the ability to walk round the concourse at the top was overwhelmingly positive. The re-introduction of beer vendors into the section was also another positive step that seemed a bit patchwork in its timing last year.

Greg Vanney talks after the game

Jozy Altidore after the game

Sebastian Giovinco after the game

Gallery from this game: HERE