Cronin On His Way Out? The Remaking of Toronto FC Continues…. Plus A World Cup Moment 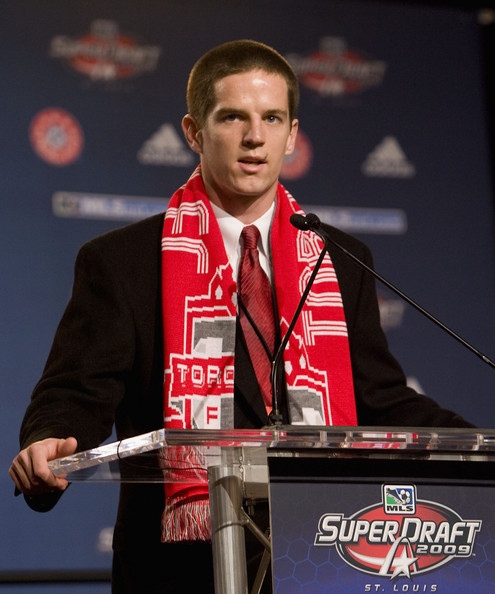 Sam Cronin To Be Dealt?

June 21st 2010- It is offficial. Cronin to San Jose for allocation dollars. Terms not released. Via Com Dios Sammy!

Edit: 1:42 PM EST … TFC’s Luke WIleman is confirming on the TFC web site that a deal for Cronin is in the works and that he is no longer with the team. Details to follow…

The original plan for this blog was to not to comment on what might be considered gossip, but with recent developments out of the TFC camp apparently breaking out of the internet message boards and into the mainstream media, I think this development warrants some conversation.

It all started last Saturday afternoon….

During the TFC open Practice at BMO Field on Saturday past, some eagle eyed TFC fans noticed that one Sam Cronin was not on the field with the rest of the team. On the fan message boards some fans claimed to have heard from some actual TFC players that Sam had been traded, or at least was about to be traded.

Speculation has surrounded both the San Jose Earthquakes and the Kansas City Wizards being TFC’s partner in any trade with Cronin going and some combination of salary cap/allocation dollars coming back (with maybe a draft pick thrown in).

As well on Saturday those sharp and observant supporters also noticed some new faces on the field, one in particular being Canadian midfielder Andrew Ornoch, who played with TFC Centre Back Adrian Cann in Denmark, and in Scarborough back in the day with Julian De Guzman. Ornoch is out of contract from his time in Denmark and the possibility that he will sign with TFC must now be given some credence of course based on the fact that he is trialling with the club and of course the personal connections that a hometown boy would theoretically have with the club. The fabled “2nd DP” also can’t be ruled out either as all it takes to sign a designated player for the rest of the season starting in July would be $167,000 in salary cap/allocation space.

It will come as no surprise that TFC is most likely close up against the salary cap and any additions to the club at this stage in the season will likely only come with some sort of subtraction. Furthermore getting something for nothing is not likely to take place and if you look up and down the roster there are not a lot of assets that TFC could get value for, or for that matter, would be keen on letting go.

I think as well it is obvious that Cronin is not a Preki player, considering that 2010 has definitely been the year in Toronto of the “Squad Rotation”. A healthy Sam Cronin (six appearances) has gotten less games and minutes than an oft injured Jacob Peterson (7 appearances) or the somewhat suspect of late Amadou Sanyang (9 games). It does not take a rocket scientist to understand that Cronin has not been part of the plan this season and looks less likely to do so as the season goes on.

Yet Cronin remains relatively attractive as a commodity. Cronin stepped in last season and appearing in all but five matches he would have been a definitive rookie of the year candidate if Omar Gonzalez did not have such a stellar season in Los Angeles. And in my eyes San Jose looks like a good fit. Crunching some basic salary cap figures it looks to me that San Jose has just a little over $1.8 million committed to players under contract and should have significant allocation dollars available, considering they are not near to topping out under the cap. Cronin could theoretically at least fetch a significant quantity of dollars back to TFC  and provide San Jose a quality player that may fit into their plans far better than he can apparently in Toronto.

Some fans have also postulated that Cronin “…speaking out of turn…” at the end of last season about the apparent dysfunction in the Toronto dressing room in 2009 was one of the reasons that led to him falling out of favour in Toronto. I for one do not buy it. To Preki that would be old news anyways considering the housecleaning he undertook. Furthermore I would argue that in fact his speaking out actually would make him potentially more attractive an asset for another club. He showed a level of professionalism, maturity and love of club than many MLS veterans would do well to emulate. He is more mature than his years. If he is to be traded then it will be for the fact that Preki does not see him as part of the plans and that he is just about the only commodity on the roster that can bring in the dollars/space needed in order to tweak the roster for the run in.

Interesting days indeed to be a Toronto FC fan. Who thought there would be nothing to talk about during the World Cup???

And speaking of the World Cup congratulations to Former TFC player Andy Boyens of New Zealand. His All Whites drew Slovakia today in one of arguably the biggest World Cup upsets in many years. Andy did not get on the pitch but being part of such a huge upset must be a great moment for him. Hopefully he will feature for one of the two remaining group games New Zealand will play against Italy and Paraguay.

Special congratulations of course go to Edson Buddle who was a late substitute last Saturday in the USA’s draw of England. Buddle becomes the first player that ever played for TFC to go on and appear in a World Cup Final. And of course Amado Guevara will be captaining his Honduras side tomorrow morning in a tough encounter against Chile. Hopefully Maurice Edu will feature as well at some point in the group stages for the Americans.

It still kind of amazes me sometimes that we actually have a top flight professional club here in Toronto that can see players that we cheer for here go on and play on the biggest stage in the sport. That is definitely something all TFC fans (no matter who they are supporting at the World Cup) should be able to celebrate.