TFC have continued reshaping the roster since the end of the disastrous 2012 season.

Coming in so far have been 4 players with more to follow.

Justin Braun arrived from Salt Lake in exchange for Aaron Maund. Braun is 25 and hoping for a ‘reboot’ to a career that saw him score 24 goals in 72 starts (96 total apps) for Chivas over four seasons before becoming ‘trade bait’ for both Montreal and Salt Lake where he didnt really establish himself. 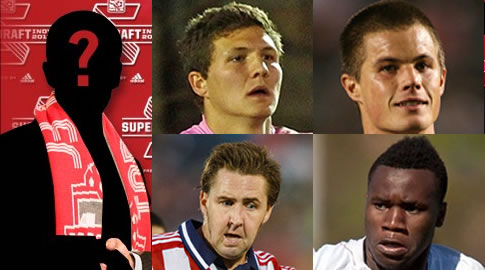 Joe Bendik is a 23 year old keeper who came to TFC as part of the deal that took Milos Kocic and Ryan Johnson to Portland. He will likely be backup to Stefan Frei and his acquisition may have had more to do with dumping salary and gaining an extra first round draft pick than the player himself. However, he does have a decent pedigree. He only started 3 games for Portland (5 apps total) but was previously a member of the US U17 and U20 national sides and also played in the Norwegian top league.

Danny Califf was selected in the second stage of the re-entry draft by TFC. He is what many might term a “wily old pro” (32) and should add some experience and solidity to the notoriously porous TFC defence alongside Darren O’Dea. He famously (infamously perhaps) made the comment of “anywhere but Toronto” when he was traded last year by Philadelphia and ended up at Chivas. That all seems to be behind him now though as he signed a contract with TFC the same day he was selected in the re-entry draft and comments made since seem to suggest he thinks the once rudderless TFC are now on the up.

21 year old Gale Agbossoumonde was TFC’s 4th signing for 2013. He was acquired in a weighted lottery that would decide where he would be assigned in MLS. Six clubs wanted him – Dallas, Houston, Seattle, Los Angeles and San Jose but TFC prevailed and the highly rated centre back will suit up for the reds in 2013.  He already has an impressive resume, US Soccer Male Athlete of the Year in 2010, a member of the US U17 and U20 squads and capped for the full international side on his 19th birthday !

The biggest signing TFC may have made since the end of the 2012 season however may have been installing Kevin Payne as President and GM of the club. The man who is credited with building the DC United franchise is now tasked with getting TFC back on track and early indications seem to be very positive. The 4 players already signed, obtaining an additional pick for this months draft, and internet buzz surrounding the potential signing of players such as the Honduran international duo of Arnold Peralta (rumoured to be a done deal) ,and Alex Lopez (less certain) are all very interesting and exciting  for a TFC fanbase that has been starved of success since inception.