The Reds took on the Red Bulls on Sunday night at BMO Field in the second leg of the MLS Eastern Conference Semi-Final and boy was it a s***show !

TFC fielded their strongest football team but it was clear from the start that the other side had not come to play, they had come to kick lumps out of TFC, and try to grab an ill-deserved lifeline. A strong showing from the match officials was needed, and on paper you would have thought we would get that from Chris Penso, a 9 year veteran referee who previous to becoming a full-time employee of the referees association had worked as both a TSA agent and a state trooper in Ohio (as well as running for mayor at age 21, and managing the family Pizza business – note to self : strike Penso’s Pizza from the list if ever in Dover, Ohio !!!). 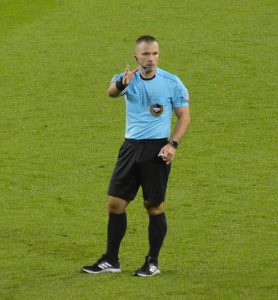 However it was not to be, and the referee not only failed to grab control of the match from the very first minute, he went on to make some truly baffling decisions that put this performance up there with some of the worst refereeing displays I and many of my fellow fans have ever seen. in any country. ever.

In 40+ years of watching soccer in Scotland, England and Canada (I started early!), I have watched a few real wallopers !! refs like ‘old school’ Willie Young who in his latter years rarely ventured much beyond the centre circle, and the disgraced former FIFA ref Dougie McDonald who resigned after being caught falsifying his match report about an incident from a Dundee United -V- Celtic game where he awarded then denied a penalty claim. Then of course there are our old friends in MLS … who hasn’t seen a fair few dodgy decisions from messrs. Toledo, Elfath, Unkel, Geiger, Bazakos and Petrescu ! (one of whom was 4th official in this game and another who was the VAR operator)

I cant decide whether this performance was marginally better than the one that saw this site start to gauge refereeing performances on the ‘Gantar Scale’ or not … Perhaps we need to rename it the ‘Penso Performance Indicator’ or ‘PPI’ and set the bar really low …. even lower than before.

Everyone knows refs have a hard job. They have to make split second decisions on a fast moving game based on nothing more than eyesight and it is tough. It gets even tougher when everyone except them has access to stadium big screens which they are not allowed [or not supposed] to view, live streams on TV or their cellphone and more. If only referees had access to some form of ‘video assistant referees’ or replays on TV screens on the side of the pitch to review contentious or potentially game-changing decisions …. oh but wait … they do !!! perhaps there were 3 or 4 times in Sunday’s game where this might have been advantageous. 2 called back goals, the ‘hands-on’ approach of Kljestan after Jozy had protected Giovinco from Adams, a sequence of events which ultimately kicked off the ‘tunnel incident’, the upending of Giovinco in the box .. and that’s just the first few items that spring into my head. This lack of control from the official, not to mention TFC’s own indiscipline in falling into NYRB’s trap could come back to bite TFC in the rear end.

In 11 years of TFC matches, I have never heard 3/4 of the ground roundly and loudly boo a referee for as long as we did on Sunday. Not even Baldomero Toledo at his ‘finest’, and that was the ref who started the requirement for officials to get a police escort from the pitch ! Sure, you get a few hundred people, or maybe a block of a couple of thousand in the south end being very vociferous in making their displeasure known … but this was thousands, maybe even ten thousand or more (at a conservative estimate), from all corners of the ground letting this official know that his performance was just not up to scratch. How one journalist could tweet out at half-time that he thought the performance was decent beggars belief ….. It was so bad from a fan perspective that if I heard it once on exiting the ground at the end of the match, I heard it a hundred times, and that was the conspiracy theory that “the fix was in to make sure one NY team reaches the final” !!! Not sure I can believe that, but the performance certainly did nothing to squash those theories … a theory that was embellished later and grew wings (so to speak) with even more co-incidental facts … the ref is from Dover Ohio and lives in Akron Ohio, both relatively close to Columbus. His wife, also a referee, works or used to work for the Red Bull company as a project lead for many of Red Bull’s promotional and brand awareness activities. Its all smoke and mirrors and can be twisted to fit into those theories but I dont buy it. Personally I prefer to believe that this ref is either not very good or that he simply has a dislike for Toronto FC  … in 12 games with him in the middle we have managed to win only twice and lost 9 with one tied. In those games he issued 24 yellows to TFC (26 to the opposition) with 3 reds for our Reds (Jozy twice plus Doneil Henry) and 2 for our opposition.

At half-time there was another incident, this time in the tunnel that led to two red cards, one for Jozy and one for Kljestan (as well as a yellow for Bradley coming of the field remonstrating with Penso). I am a TFC fan so of course I am going to believe Jozy’s account and not the accounts coming out of the opposition camp (aka. Red Bull***t!). TFC are going to appeal the red card, and apparently have witness statements from several security guards as well as police officers and also their own video (not the one shown below) so perhaps we will see more in the coming days … or perhaps not.   For now, here is the ‘fight video’ posted to youtube and to quote a question asked in the video of the Red Bulls … “Why are you here? Your locker room is over there” . this is the big question and the league MUST address this. On the ExtraTime Radio Podcast, they discuss the theory that this was a deliberate measure to wind up the TFC players. This theory I tend to agree with … and it almost worked.

The game itself ? … oh yes, we lost 0-1 after a deflected long range effort from Royer that came off Bradley Wright Phillips. That was about it !

Quote of the day : Well its actually a quote from a work colleague while I was writing this …. “At least Columbus will be more classy !” … Who’d have ever thought a TFC fan would utter those words about Columbus … and worryingly, who’d have thought that I would agree with them ! The New Jersey Red Bulls definitely go equal top of my personal s*** list now (ahead of Columbus and tied with Montreal) and Sacha ‘Pornstache’ Kljestan just replaced Steven Lennhart on my dartboard !

Gallery for this game

And for some light relief …. Who has the better ‘pornstache’ ? Penso, Kljestan or our very own Jon Conway