TFC Need To Paper The House 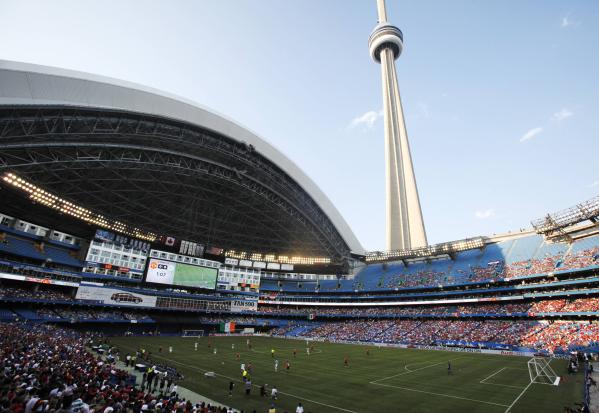 Tuesday night will be the last game of the 2011 season held at BMO Field, when the Canadian National Team finish up the second round of FIFA World Cup qualifying with what is now a meaningless game against St. Kitts & Nevis considering that Canada has already qualified for round three next year versus Panama, Honduras and Cuba.

For me attending the event will be bittersweet. I love every outing I have at our stadium and win or lose there are always moments of fun each time I venture out whether I am cheering for Toronto FC or Team Canada. However this final match also means that I won’t have the pleasure of seeing a lot of friends who I stand with game in and game out until next season kicks off.

The final match on Tuesday has also gotten me thinking more and more about a subject that of course is weighing on the minds of many Toronto FC supporters now that the Champions League draw is done, and that is namely where to play the Quarter Final first leg versus the LA Galaxy next March… do we play it at BMO Field or at the Rogers Centre?

Let me go on the record as saying that I choose the Rogers Centre (with one huge caveat). Let me explain my reasoning.

+17.9 Celsius was a temperature record set in Toronto as recently March 6th 2009 and going back through some of the government weather data online the coldest it has been in the last fifty years in Toronto was back in 1960 with an average temperature of -12 Celsius with fifty kilometre wind gusts (I frankly don’t know how to calculate wind chill… let’s just say it was cold and move on). The median average temperature for the first week of March in Toronto over the past half century according to Environment Canada is usually in the -2 Celsius range. There is snow on the ground during the first week of March over the past fifty years or so for roughly 87% of the time.

So if you play the match at BMO Field you might get a freak day like March 6th 2009 and be able to cheer for TFC in your shirtsleeves or it might be a gawd-awful blizzard on the other end of the scale. Or it might be likely somewhere around zero with snow on the ground. Bottom line is that the weather is less than likely to cooperate with having the game outside in Toronto during the first week of March.

The other negative for BMO Field is that there might be grievous harm done to the playing surface if it is played on too early and if the under soil heating has to be turned on as a result to prepare for the game. From my section 113 vantage point I can tell you that the pitch at BMO Field was in arguably better shape during the New England game last month after a full season of use than at any other time I have seen it. The grounds-keeping staff have two years of toil and millions of dollars invested in the pitch and the grass has really bedded in nicely after two seasons and if theoretically a March 2012 game in sketchy weather does some significant damage to the surface TFC might find itself struggling with a less than ideal pitch for what might turn out to be l0ng stretches of next season.

And even though many have speculated (especially after the two rain-outs this past season) that rescheduling the game for a later date if the weather does not cooperate with a game outside in early March is not a big deal I beg to differ. There is not a lot of wiggle room in next season’s schedule with MLS and V-Cup games coming early on in the cycle and if TFC manages to advance into the later stages of CONCACAF it will be a game every three days for a long while. On top of that Don Garber is now saying that he intends to try and honour more International dates next year to boot.  Unnecessary fixture congestion does not help TFC.

Now the Rogers Centre is far from ideal. Any building that has to host multiple types of sport within the same venue is by definition going to have to make compromises. The upper 500 levels have a nice rake to them but they are miles away from the field of play. The lower 100 sections have a rake that is far too shallow for my tastes which means that fans are also far away from the action on the pitch. And the dome itself does not lend itself to creating the kind of loud atmosphere that a game of this kind of importance should have, unless the stadium is filled.

And that gets me to the caveat.

The Rogers Centre needs to be filled, and when I mean “filled” I mean filled with at least 40,000 fans to make it worthy of playing there. And whether it will be filled all comes down to how willing the MLSE brass are of getting creative with their pricing and community outreach to fit the bill. Now I understand renting the Rogers Centre and getting quality sod shipped in from the Carolinas or Florida or wherever they source it from is probably going to cost a lot of money. And I of course also get that TFC is a business and that a business needs to make a profit. Yet this one game, this one special moment that might see the Reds maybe win their biggest game ever might end up being as big a deal in the history of this club as “Dichio 23:13” turned out to be. There have been five years now of less than stellar results for this club and in a lot of ways CONCACAF success early on in 2012 along with perhaps finally a competitive MLS team on the field might be a “reset” kind of moment that might just help recapture the spark in the fan base and in the city of Toronto that was TFC circa 2007 and that definitely was not TFC circa 2011. Losing some money on this one game would not be the end of the world considering how much mileage they could get out of a full house.

If it was my call to make I would charge twenty dollars at most for tops seats. I would make it my mission with this game to actively outreach to ALL the local soccer clubs in Toronto and sell them seats by the hundreds and thousands. Essentially I would paper the house. I fear though that there is some MLSE philosophy on a corporate level that makes them think that getting aggressive on pricing for this one off unique game devalues the TFC/MLS product as a whole and makes it harder to justify the prices they are charging for seasons tickets or for single seats at BMO Field.

Nothing could be further from the truth. Anselmi and company need to think of the optics here. This is not just another game where the benefits can be quantified just on some spreadsheet. A full house makes for great television. A full house creates buzz in the sports media and regular media that would probably not care too much about TFC most of the time. It would be a chance to put the Reds back onto the front burner of the Toronto sports scene. Fifteen or twenty thousand supporters at Rogers Centre accomplishes none of those goals. 40,000 + certainly does.