Owen Hargreaves? No Thank You! 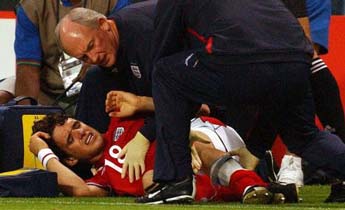 England International and long term abuser of the British National Health System, one Mr. Owen Hargreaves is out of contract in a few weeks. And if reports out of the English press are to be believed then Mr. Hargreaves has been “linked” with a move to one of the two Canadian MLS clubs once his contract is up. And that of course leaves either Vancouver or Toronto.

I think I will take “linked”  with a huge grain of salt considering the track record of the English sports media to accurately report transfers. The European clubs, unlike the norm many of us might be used to in the North American sports culture such as it is, keep the media at a great arms length for the most part and to fill column inches and air time every rumour heard from the hairdresser of a guy who is the third cousin twice removed of a guy like Owen Hargreaves instantly is deemed newsworthy.

But hey, it’s the Internet here. Let’s play along for a minute and pass judgement on a groundless piece of conjecture shall we? And since this is a Toronto FC blog I am not going to re-hash the “Hargreaves betraying Canada/CSA screwing Hargreaves” memes either. Nor am I going to speculate on Vancouver as a destination. Let’s just assume for a second that there is a good chance that he might come to TFC and that the club is seriously considering it.

Hargreaves has made 39 appearances since his 2007 transfer to Manchester United from Bayern Munich (only one start since 2008 and one appearance off the bench since 2010), and is apparently blessed with the physical resilience of a china doll. MLS is a physical league with athletic players and there is that little thing called FieldTurf that he would have to take his delicate knees and hamstrings out onto from time to time.

Going for a “big name” for the sake of a big name is pandering to the casual fan. He is undoubtedly well known and his arrival would see potentially an increase in the visibility of the team, and yes might even see an increase in gate revenue for a while. And many Man U fans out there (regrettably there are a lot of them ) might spend big money getting Hargreaves TFC jerseys at $100 a pop. In my humble opinion that is about where it ends.

And most importantly a large number of the dedicated supporters of Toronto FC that are actively involved in supporters culture here also call themselves “Voyageurs”, namely fans of the Canadian game who actively support the Canadian National Team. Bringing Hargreaves into the Toronto setup would be looked by many of these dedicated fans as either the club being tone deaf to the wishes of many of its dedicated fans at best or a huge insult at worst.

One of the things I have been most hopeful about since the arrival of Winter, Mariner and De Klerk to Toronto FC was the fact that it felt to me that the footy intellect of the club had finally gotten to the point where I felt it needed to be, especially when compared to the previous regime. Bringing in a controversial, overpriced, oft injured player, to fill an already filled need and who likely would be loathed by a large segment of the team’s most ardent supporters seems simply stupid to me.

The only upside I can see is that “technically” he would count as a domestic player would he not?

How’s that for irony!

Your comments are always welcome and appreciated. Let us know what you think.