One Eye on Sunday and Another on Wednesday 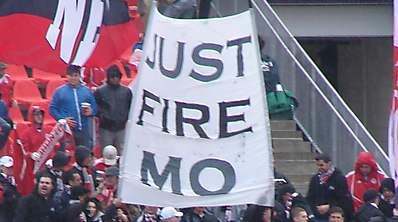 Toronto FC plays Seattle on Sunday afternoon in a critical early season game against one of the better MLS sides. If TFC loses the game it will be going into a crucial part of its MLS season having only secured three out of a total of 15 points available.

This game is a must win.

Yes I know this is only the second home game and yes I know that it very early on in the season, with 25 more games on the horizon to play, to make such an assessment. However if you look at the games ahead you will realize as I have that Toronto FC MUST get something from this game.  Seattle is coming off a disappointing draw against Dallas last night and will be playing with only one day rest between the travel day the rest day and the game day 0n Sunday.

Yes they are a better side on paper than TFC, but they will be tired and to date they have struggled relatively with their linking play and goal scoring in comparison to the 2009 edition of the Sounders.

Plus if you look at the MLS games ahead in the next month the chances to pick up points are going to get increasingly tougher. Along with Seattle, we have Chicago and New England at home plus Real Salt Lake, LA Galaxy and San Jose away between now and the end of May. Toronto can’t be considered a favourite based on current form in anything other than the Chicago game.

I may be in the minority of fans here but I think that I place just about as much importance on the Canadian Championship as getting into the MLS playoffs. And I think if Preki does not take the Cup competition seriously and field as close to a full strength side as he can then he runs a major risk on many levels.

Fan discontent is running at an all time high in Toronto. An embarrassing defeat to Montréal next week would see that discontent explode in the stands. It will definitely be ugly.

And this club, considering how relatively new the group of players is, needs to have some sort of unifier to help hasten their development from a group of players wearing the same kit into an actual team. I would submit that a successful Voyageurs Cup run is just the unifying experience this club needs. And this bringing of the club together will have a positive impact on the rest of the MLS season as well.

Preki famously looked blasé about the Voyageurs Cup in the press conference in March announcing the dates for the games in the tournament. For his sake and the sake of the team, let us hope that he understands that this is not the US Open Cup. This is something that really matters to the most engaged of TFC fans.