Maybe He Will, Maybe He Won’t – Dickov Mulls Things Over 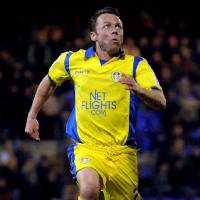 Paul Dickov sat down yesterday with Leeds newspaper the Yorkshire Evening Post and talked about his short stay with Leeds United and what he plans for the future. When asked about his plans now that Leeds have released, him here is what he had to say:

“…”I don’t know. I’ve had a few offers to play and a few coaching-wise as well…But I leave on a good note here at Leeds and still feel as if I can play a bit…I’ll sit down with my family and make my mind up in the summer…”

Paul has been linked to Toronto FC for a number of months now dating back to a trial in February of this year and of course through his friendly relationship with fellow Scot Mo Johnston.

His quoted comments above however will most likely put pause to the rumour mill swirling around him and the link to Toronto.  After signing from Derby County Paul only appeare

d in four matches for Leeds and last week was cut loose by the Yorkshire outfit as they prepare for promotion to the Championship. The quotes above do not close the door to him coming to Toronto,  but they may at the very least put a damper on anything happening in the immediate future regarding signing and playing for TFC.

A few things are apparent to me from the article (and I suggest you all read it by the way). If Dickov does come to Toronto it will be for this season only as a player. I do not think he sees himself playing past 2010. He mentions offers from other clubs and coaching opportunities that may come up as well but with the European season now essentially closed those will be offers I guess for the 2010-2011 season in coaching roles only. I do not know if the man has his FIFA coaching badges or not as of yet, however I would not be surprised if he already does have at least some of them.

I am not sure if he has what it takes to still be an impact player. But he does indeed seem to have the ability and temperment to mentor others. I could see Barrett and White getting a lot of good out of spending time with a professional such as Dickov. I guess we will have to wait and see.