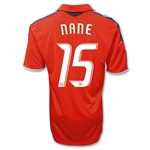 Wednesday’s Toronto Star is reporting that Rogers Communications has made a bid to purchase controlling interest in Maple Leaf Sports & Entertainment, owners, among other things, of our little soccer club called Toronto FC. Here is the link to the story in detail: http://tinyurl.com/28gmlfv

The Star is reporting that Rogers Communications, owners of the Blue Jays, The Rogers Centre, and the Sportsnet TV channels is looking to buy out the majority ownership stake of MLSE from the Ontario Teachers Pension Plan, who hold a majority stake in the enterprise currently. Minority owner Larry Tannenbaum supposedly has the first right of refusal on the proposed deal, which is perhaps worth more than $1.3 billion if it happens. Toronto FC of course, along with GOL TV, would be part of any deal.

So how would a new corporate owner like Rogers impact TFC? Would it be a good thing or would it make it harder to make the club a success?

First off the Maple Leafs are what any prospective owner would be mostly interested in.  With due respect to them, the Raptors, TFC and the Marlies are very much secondary… The Leafs are the prize! Rogers in particular is keen to try and finally wrest the top sports channel spot from TSN and having exclusive rights to highly prized Maple Leaf games would go a long way towards establishing Sportsnet as the number one sports channel in Ontario. And as Rogers has shown in its purchase of the Blue Jays/Rogers Centre ten years ago, they understand that owning a team gives them cheap, exclusive and profitable programming for their current sports channels. As well Rogers is probably looking at cutting off  at the knees MLSE’s stated goal of launching a new sports channel of their own that would be based on programming primarily from their four clubs. If you have ever been to New York City what MLSE has proposed doing would look much like the MSG network does. MSG has Rangers, Islander, Nets, Knicks and Red Bulls games as its primary source of programming. Perhaps Rogers is trying to cut that threat off before it even starts to undermine what they want to do with Sportsnet long term. And finally catching TSN would be a much harder proposition if there were no Leaf games to build a competitive schedule around.

I would regularly not comment in this space on these kind of corporate machinations, but in this case I thought it worthy of discussion for a couple of reasons. First within the TFC fan base there is a significant amount of antipathy towards MLSE as owners. Like Maple Leaf fans have been doing now for years, many TFC supporters feel that MLSE as a corporate entity is more interested in the bottom line than in actually building a winner. The fan backlash earlier his fall in regards to further season ticket price increases was of course partially a reaction to that reality.

Many fans, myself included, feel that the relatively unique way that MLSE is structured (a corporate structure with a number of different groups owning a piece of the overall corporate pie) does make a club like TFC somewhat tone deaf from time to time to what their fans actually want. Leaf fans in particular are vocal in their antipathy to the corporate overseers. The wish among many is of course for a “Stienbrenner/JerrycJones/Mark Cuban” rich billionaire type to swoop in and take over the company and spend spend spend, profits be damned,  until the clubs they own win championships. That is not in the cards if The Star is to be believed. At the end of the day it comes down to one single corporate entity perhaps buying MLSE/TFC from another corporate entity that currently has a number of shareholders calling the shots collectively.

So if true, how does this all impact Toronto FC? Hard to say.

MLSE definitely is more of a known quantity when it comes to Soccer than Rogers is. MLSE did put up the money to get TFC off the ground. They stepped in when no one else would, Rogers included, to build BMO Field and pay the expansion fee to MLS. MLSE has not been shy to spend money when it comes to TFC. One can of course, like all its other sports properties, question some of the hirings and decision they have made, but where TFC is concerned MLSE has shown a strong commitment to building the club and put their money where their mouth is. Rogers is much less of a known entity. But TFC is now fairly well established in the market and without a doubt is a profitable concern.

Rogers has been a broadcast partner for Toronto FC since day one. And to their credit Sportsnet has been a much more friendly space to Canadian soccer than TSN has ever been. A deal like the one speculated in The Star today may see Rogers put significant dollars into building TFC into a product that could at last finally draw significant television viewership across Canada. Currently TFC does not draw well on television at all and more of a focus from a broadcast firm like Rogers might be the way ahead.

MLSE, warts and all, are a known commodity to TFC fans. Rogers? Not so much.

And I think that most of us that live and breathe all things TFC are going to have to wait and see what this all means. Stay tuned.

And I would be remiss if I did not at least mention in passing the trade on Tuesday between Toronto and newly crowned MLS Champions Colorado Rapids that saw Joseph Nane sent to Denver in exchange for a 2012 third round MLS SuperDraft pick. Nane was a fourth round selection in last season’s draft and in limited service with Toronto he looked raw and physical, much the type of young player that Preki was fond of. With new management perhaps on the way Earl Cochrane has made the decision that a player like Nane (a relatively unskilled player who does have some physical attributes is the consensus here in Toronto about him) is not the kind of player Toronto plans to build around going forward. And getting a third round pick for a player TFC drafted in the fourth round in return can be looked at at least as getting something back for someone that was not going to be in the cards anyways. SO the re-tooling under interim GM Earl Cochrane continues.