Dos Santos is a Nutter, Captain Caveman Strikes Again, And Things are Looking Good For TFC

The Montreal Impact can always be counted upon for some comedic relief, so far at least, during the 2010 edition of the Canadian Championship for The Voyageurs Cup. I usually am up late watching Jon Stewart or Steven Colbert anyways on a weeknight before nodding off, but of course last night I was watching the cup tie between the Impact and the Vancouver Whitecaps instead. I did not miss my comedy programs one single bit.

Here are the highlights courtesy of Rogers Sportsnet:

TFC cast-off and Captain Caveman look alike Adam Braz took a silly second yellow card and sending off late in the game that led to a Marcus Haber penalty to tie the game at 1-all. And before you give me stick for calling Braz a caveman you tell me if you can tell which one is the cartoon character and which one is the alleged soccer player: 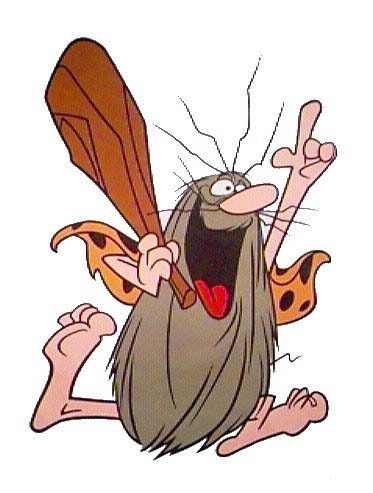 I wanted to draw your attention to some comments made by Montreal coach Mark Dos Santos after the game last week in Toronto and of course after the draw last night in Vancouver. I think that this guy has completely lost the plot.

Last week he claimed that the officials favoured TFC all night because they are in Major League Soccer and Montreal is not. He said the referee should have been “…more courageous…” in his calls against TFC. “When you see a player that has X or Y (on his back) fall he might not call it but if De Rosario or (Julian) de Guzman falls, he’s going to call it right away.” No matter that Toronto received more cautions and cards during the match of course.

And incredibly he went on to insert yet another foot into his mouth last evening when he stated that “…since the start of the tournament, we are the strongest team when we play 11 versus 11…We dominated the first 80 minutes of play, but we were unable to score a second goal. It hurts when you tie a match this way because we came here to win. We already won this tournament with seven points, so we must continue believing…”

Dos Santos would be better served working with trying to get his undisciplined club to play better football without all the hyperbole. Yes Montreal were arguably the better side for the first 45 minutes last night but Vancouver took the match to them in the second and were in my eyes the better side overall on the night.

If Toronto can go into Montreal next Wednesday evening and secure another victory then Montreal will be eliminated and it’ll be between TFC and Vancouver to decide who gets into the Champions League. And in an ironic twist if TFC does win and eliminate the Impact we are looking at another scenario the week following where Montreal will not have any motivation two years in a row in this tournament to field a strong side in their last home tournament match.

Whitecaps fans are still bleating of course over the “Miracle in Montreal” game last season when the Impact did not field their strongest side possible and TFC scored six goals to secure the championship. And in two weeks Montreal may very well do the same thing to the detriment of Toronto FC depending on how next week’s Voyageurs Cup game goes.

I think that you won’t hear from Toronto fans the same sort of bile directed towards Montreal as Whitecaps fans spewed forth if this is the case once again. Vancouver would do exactly the same thing would they not?

Toronto had to still score five goals against a side of professional players away from home in tough conditions last year to win on goal differential. And they did it.

But before we get ahead of ourselves, Toronto FC has to do the business in Montreal for the third year in a row…. And there is the little thing to deal with called the Chicago Fire on Saturday afternoon.

More on that tomorrow.