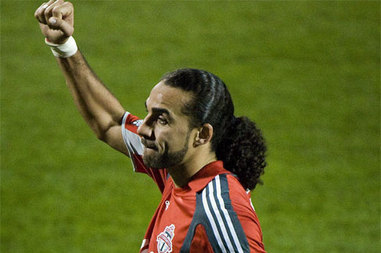 …I am sorry to the wonderful and passionate fans at TFC about my departure to NY Red Bulls. Just wanted to say it has truly been an honor coming back home & playing for my home crowd. Unfortunately things didn’t work out as it was my goal to help TFC succeed in winning a “MLS Championship”. You the fans will always hold a special place in my heart at TFC. Best Wishes…. (Dwayne de Rosario via Facebook)

It saddens me greatly that it has come to this for the best player TFC has had so far in its short history. But he apparently got his wish. Dwayne de Rosario has finally forced his way out of Toronto.

By now unless you have been in hanging out today in a cave on Mars with your eyes closed and earplugs in your ears you will have heard about the news surrounding Dwayne de Rosario and that his tenure with TFC is now officially over.

Whether it all started this morning, this week, this month or two years ago is irrelevant at this point. But what is clear is this. At some point between Saturday past and today Dwayne de Rosario, the captain of the team, walked out on Toronto FC. And he had no plans on coming back. The media had little to no access to training sessions this week so all we know that is that at some point between his wonderful on field gesture of support last Saturday for the family and friends of a deceased member of the Red Patch Boys, Dwayne allegedly headed back home likely furious with the club paying his salary. The “when” is beside the point I guess.

And now the trade is finally done. After some earlier snags that delayed the consummation of the deal TFC announced late Friday afternoon that DeRo has indeed been traded to the New York Red Bulls in exchange for Generation Adidas midfielder Tony Tchani, defender Danleigh Borman and a First Round pick in the 2012 MLS SuperDraft. There are only rumours out there today about the financial terms of the deal and if TFC is or is not eating any salary in the deal and of course if Dwayne will get that DP status and big raise he has been coveting for years now in New York.

To his credit in his tenure here DeRo performed without a doubt extremely well on the field and almost single handedly won the club its first piece of silverware in a magical performance in Montreal that all TFC fans will remember for a long long time. Dwayne took the club on his back that night at Saputo Stadium and carried them to the Voyageurs Cup. Scoring one goal in under slightly every two league games he played here undoubtedly speaks to the job he did on the pitch. He was the face of the club in his time here. He was a local boy who was the captain of his hometown side.

For many others TFC fans however it is hard to not remember instead the little fling Dwayne had with Scottish powerhouse Celtic this winter past and of course the now infamous “cut me the check” moment last fall at BMO Field. It is also hard not to see that even with DeRo on board Toronto was still essentially an expansion club on the field and that his presence over parts of three seasons never truly got TFC over the hump and into the playoff dance. It is going to take some time for all of this stuff to recede into the proverbial rear view mirror of hind sight before we can truly judge the impact that this day will have and what, if any, his legacy will be in the history of Toronto FC.

And today in the immediate moments of hind sight one starts thinking of blame and how it all went so wrong. Going to Glasgow was a choice. “Cutting the check” was a choice. Signing a four year deal was a choice. Publicly pronouncing anger over his contract status time after time to the media was again a choice Dwayne de Rosario decided to make. Toronto FC is probably not free of guilt in how all this went down either. Promises were allegedly made to Dwayne that the club never truly honoured. Two DP’s were brought in after DeRo (one who bombed and one who disappointed greatly) for more money that increased his anger and sense of betrayal even more. The club never truly surrounded Dwayne with enough quality players or coaches in his time here to give him the chance to win in Toronto the way he proved he could win before he came here.

And wasting effort on blame or recriminations at this point is beyond irrelevant. Dwayne de Rosario is no longer with Toronto FC. He is gone to New York. I wish him well. He was nothing but a class act and a gentleman to me personally in the many times I met him in his tenure here.

But tomorrow I am going to BMO Field to watch and cheer on my Toronto FC, not to wring my hands over what could or could not have been with DeRo in TFC red. A number of players I have never seen before might likely feature for TFC tomorrow and that is a bit exciting. A new Captain will wear the armband. Three points are on the line and Coach Aron Winter has to find a way to put the distractions of today behind the team and to earn those three precious points.

The circus has left town. Time to get down to business.