DeRo Trialling With Celtic – And TFC is Blindsided 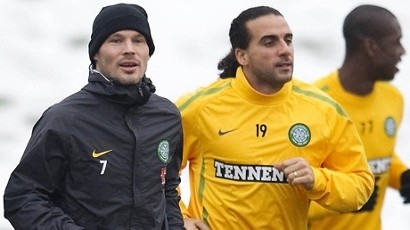 So someone must be lying.

On the main page of the TFC web site this morning you can see a headline posted yesterday entitled “Reds Rubbish Rumour“.

“Dwayne is not going on trial with Celtic or any other club…We have not received word from anyone and expect him to be with TFC when training camp opens next month.”

And now less than one day after that denial, here is what he is going to be waking up to today.

Along with former MLS player Freddy Ljundberg, here is a shot from early Tuesday morning showing Dwayne De Rosario clearly wearing Glasgow Celtic gear training with the club in Scotland. A number of English and Scottish media outlets are reporting that De Rosario will be in Glasgow for at least a week while Neil Lennon and his staff take a look at him.

Whether this means that we have seen the last of DeRo in Toronto FC strip of course remains to be seen. But in the interim this development is very troubling for a number of reasons.

As I have written about now on a few occasions De Rosario is under contract with Toronto FC until the end of next season. And he has complained publicly on a number of occasions that he is not satisfied with the salary he receives, up to and including a now famous on field display where he “wrote the cheque” intimating to TFC  that he felt he needed to finally “get paid”. The reality however is that he has little leverage. If he is to leave this club to play outside of MLS there has to be a negotiation with Major League Soccer to secure his release and a transfer fee has to be paid by a club like for example Celtic, of which a piece goes to TFC. Within MLS he is a signed player that of course can be traded or not traded. This means that the only way DeRo can leave TFC is with the cooperation of TFC.

In the quote from Cochrane the key words that stand out are “…we have not received word from anyone...”. This must mean if TFC is to be believed, that they were not told by De Rosario that he was planning on going to Scotland to try out with Celtic. It also means that it was likely De Rosario and/or his agent that called Celtic up and asked if it was okay for him to come over for a tryout.

TFC is adamantly saying that they are not interested in any kind of loan deal like the one that saw Landon Donovan play for a few months earlier this year with Premiership side Everton before reporting back to the LA Galaxy to continue his time in MLS. So TFC is saying there is no transfer being considered. They are saying that DeRo is under contract and is expected to come to training camp in Turkey next month, and that they are not considering any sort of loan deal.

So as I see it it looks to me that this entire episide is yet another tactic in a long line of tactics DeRo has tried over the years to get himself paid what he feels he is worth. And this coming so soon on the heels of TFC coming out with such a vehement denial of any movement of this player must be a huge embarrassment for Cochrane and his staff. The picture  above does not lie. DeRo is in Glasgow and he is trying out with Celtic, TFC denial notwithstanding.

Not being party to the discussions, if any, between TFC and De Rosario, it is hard to know exactly what has happened. But I truly believe that there is no way TFC would have known he was going to Scotland and yesterday come out with such a public statement of denial as they did.

For more than a hundred days now there has been no permanent General Manager or Coach in charge at TFC since the club fired Mo Johnston and Preki. Perhaps a question worthy of asking to TFC about this entire situation that has emerged today is would DeRo be going behind the team’s back the way he likely did here, if a new GM and coach were in charge?

What do you think? Your comments are always welcomed and appreciated.

TFC has commented now on their site and here is what they are saying. They are confirming that they were indeed unaware of what DeRo was planning to do.

“We were unaware of Dwayne’s plan to train with Celtic and we will contact them to understand the situation. Obviously, if there is interest in a short term loan arrangement by either him or Celtic, they will need to approach us and the League formally and we will consider based on what is in TFC’s best interest.”