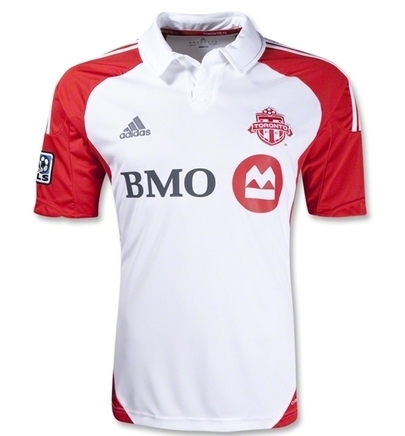 BMO Field is getting busier by the day this week as Training Camp has opened and players, new and old, have reported and they will get onto the pitch Wednesday and start work in earnest followed up Thursday with the annual Media Day event. And perhaps no group of players will need to work harder as camp opens than the defenders, a group that we all know were simply not good enough last season. And no single part of the team needs more work and attention.

At goalkeeper the Reds are arguably in the best shape they have ever been. Stefan Frei is still the keeper he has always been (perhaps one of the best shot stoppers in all of MLS) and with the emergence of Milos Kocic as a viable alternative it could be argued that the Reds are as good as anyone in MLS at this position based on the relative lack in drop off between starter and understudy. I would be perfectly comfortable with either of these two in net on game day.

Up front Danny Koevermans had an encouraging strike rate once he settled in last summer of almost a goal a game and one can hope he has his game fitness all sorted for the start of the season and can kick on as a top MLS striker from the outset.  Champions League hero Joao Plata gives pace and width to the attack and he is locked up for 2012 and beyond. Ryan Johnson resurrected his MLS career in Toronto last year and will look to at the very least being Danny K’s understudy. Newcomer Reggie Lambe (he of the reportedly crazy Caribbean speed) and Nick Soolsma will fight for minutes and draftee Luis Silva could perhaps play out wide if the scouting report on him is correct. And Keith Makubuya, a year on from his promotion to the senior team from the Academy will also factor into the training camp mix. Yes there are some questions here but overall there are options for once up top and some depth and flexibility in how the attack can be structured game by game.

In the midfield Torsten Frings and Julian de Guzman will continue to anchor the club in the middle of the park and a large mix of options ranging from Terry Dunfield, Elbekay Bouchiba, the aforementioned Luis Silva (depending on how Winter wishes to use him), Eric Avila, utility-man Matt Stinson, youngster Oscar Cordon and maybe newcomers we do not even know about yet might feature. We also can’t forget that a more stable, settled and talented midfield group can also help the defenders do their jobs more effectively, a factor we forget if we just look at the defenders as a group in isolation.

Overall in five going on six seasons of Toronto FC history you could perhaps argue that with the exception of the defence the other three areas of the field are about as settled (at least talent wise) going into the 2012 season than they have ever been. And having perhaps a full roster on hand at the start of training camp instead of the end of it like under the previous Ginger Glaswegian’s tenure is certainly a move we all should welcome.

And in the next week we should start to see emerge what sort of plans the club has to upgrade the back line. And don’t be surprised if we not only see newcomers but see some older hands leaving. Lets start with Adrian Cann and Dicoy Williams two players coming off of season ending injuries and they both remain question marks. Cann is closer to a full return and to me he is the player of the two worthy of keeping around if it gets down to tough choices. Cann is only a season removed from being named Team MVP and he has experience, leadership skills and in the right setup his relative lack of pace won’t be the problem it might otherwise be. Williams was hurt so relatively soon after arriving in Toronto and is still much farther away from returning that I would not be surprised one bit if he goes elsewhere before the season starts. Ashtone Morgan and Donell Henry made great advances last season and Aron Winter showed such faith in them that its not outside the realm of possibility that a great training camp could see one or both of them finding a way into the starting XI mix.

Richard Eckersley is rumoured to be reporting to Toronto later this week if word out of England is to be believed. Burnley have reportedly torn up his contract (in spite of the wishes of Manchester United!) leaving the way open for TFC to sign him without worrying about how to find a way to scrape up a transfer fee under the thumb of a restrictive salary cap. All they have to do now is to come to personal terms over a wage and the length of the deal. Eckersley returning will go a long way to making sure that one of the fullback slots will be spoken for come March. A wildcard is of course the recently drafted Norte Dame defender Aaron Maund who has a chance like all the others in camp to impress and earn himself a spot and we will have to wait and see what comes out of camp as far as his development goes. I honestly don’t know enough about the kid to offer any sort of judgement at this early stage.

But perhaps the most important developments defensively come from two long rumoured newcomers that we may see in Toronto as early as this week. The first is Chilean Left back Miguel Acevel who is a twenty nine year old defender who has played in the Chilean top flight (including eight years at Colo Colo) and who just last year earned his first International cap for his country. He has been linked to TFC for weeks. The other is Ecuadorian centre back Geovanny Caicedo who was a team mate of Joao Plata at LDU Quito and has made over 240 appearance in the Ecuadorian League since 2002 and eight appearances for his country since 2009, including most recently the 2011 edition of the Copa America and a friendly versus the Americans last fall. South American International calibre defenders seem on the surface to be upgrades over the Ty Harden’s and Andy Iro’s of the world don’t they?

So perhaps as early as next week we might start seeing a significantly upgraded (talent wise) defensive corps really start taking shape for TFC. Then we will see if they can give the club more chances to stay in games and finally become competitive in this tough little league of ours.