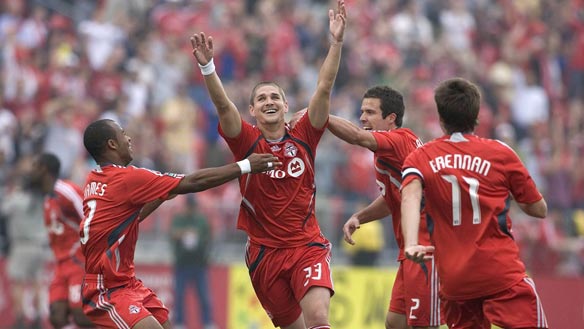 If you have not discovered the “It’s Called Football” Podcasts as of yet then you are missing out on one of the best sources of Toronto FC news and views available. This past week Host Ben Rycroft interviewed former Red and Welsh International Carl Robinson. The interview is below and I highly encourage you to listen here, or better yet subscribe through iTunes and listen to them on the go.

I for one have been waiting for this interview for a long time.

As some of you know, earlier this season Kristian Jack of The Score TV channel interviewed former TFC player Ali Gerba and former Interim Coach Chris Cummins. In each interview the guests came out and essentially called out TFC Director of Soccer Mo Johnston for some of the distortions, half truths and misconceptions out there surrounding their respective departures from TFC and how the club is being run.

And a lot of fans threw Kristian Jack, and for that matter Gerba and Cummins, under the proverbial bus for what they considered to be some poor reporting and/or sour grapes.  In fact, what TFC directly said about the interviews was much worse. This is what I wrote about this very topic back on April 26th

…In the press conference announcing the retirement of Captain Jim Brennan, a reporter asked Jim and Mo to comment on interviews by Kristian (Jack) that stated that there were serious issues between groups of players in the locker room during the tail end of Toronto FC’s unsuccessful campaign in 2009 to get into the playoffs. Both Mo and Jimmy then proceeded to state that this was an outright lie and that the source of the pieces (Kristian Jack) could not be trusted to report the truth. It was arguably the biggest slap down a journalist has received from TFC since the inception of the team….

And now we hear from a classy Carl Robinson that in his mind, everything that Ali Gerba and Chris Cummins alluded to in their respective interviews (that TFC called lies by the way) was 100% truthful from his perspective from within the locker room. Interviewer Ben Rycroft (Great job Ben!) pointedly asked Carl to speak about Mo Johnston directly and when given the opportunity to do so Carl essentially replied that in the absence of nothing good to say he would say nothing at all. Carl repeatedly in the interview spoke about how much he loved Toronto and the fan support in Toronto. He even called TFC a wonderful organization on a couple of occasions so I do not think that he was being anything but what he felt to be genuine and real.

With the results so far this season it is easy to forget the turmoil surrounding this team in the weeks and months leading up to the start of the season. As fans we forget it at our peril. After a shaky start, TFC went into the World Cup break better off than many observers, myself included, thought was possible. The eight players out and twelve players in strategy has to this point worked. The club has gotten through the toughest part of its schedule relatively well. The Voyageurs Cup has been retained and the Champions league qualification games are on the horizon. There is talk of new Canadian players in camp with the club on trial. And of course the rumours swirling around the imminent departure of Sam Cronin has re-ignited talks of a second Designated Player coming to Toronto.

But a lot of problems that the results that the Reds have earned this season has overshadowed still remain. The mismanagement of the salary cap by Mo Johnston has left the club in a difficult spot when it comes to being able to further improve the team. The reputation of the club has been negatively impacted within the MLS player fraternity based on how some players were treated. And there have been apparently attempts to criticize the critics by the club.

My feelings on Mo Johnston are well known and I think that the vast majority of fans are as firm in their convictions about him as I am in mine. In fact I actually find myself feeling a little sorry for him from time to time these days. I think at the end of this 2010 campaign any success the club will achieve will lead to Preki getting all of the credit and any downfalls will see Mo and Mo alone get all the blame.

But I hope once and for all that the words of Carl Robinson can put to bed any doubt about the issues surrounding the 2009 campaign, where it left the club, and most importantly of all, how our Director of Soccer conducts his business.