Country or Club? Club or Country? Why Not Both! 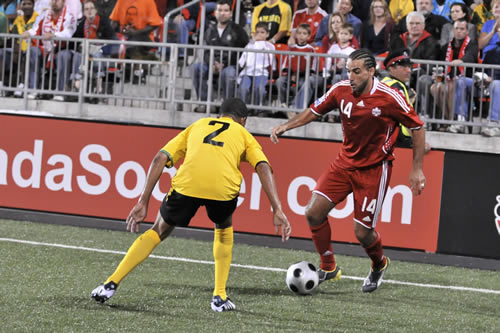 Those Toronto FC supporters who were there when the Toronto Lynx or Toronto Blizzard were in their heyday know how far the club game has come in Toronto over the years since the inception of Toronto FC in 2006. The days of empty seats and civic indifference that was the hallmark of professional soccer in Toronto back in the day, it is safe to say, is pretty well over. And the growth of a true supporters culture around Toronto FC has undoubtedly been a huge part of this success.

However when it comes to the Canadian National Team there is still some work ahead when it comes to translating the club success of Toronto FC into a National Soccer Stadium  that is actually a true home game for Canada. I will get to how in a moment and why it is important for Toronto FC to see that this happens.

In a previous post I stated that Canada getting to the World Cup in either 2014 or 2018 would be the type of special event that would draw Toronto FC much more into the mainstream of this community as a whole. Seeing a Nana Attakora or Julian De Guzman playing for Canada in the World Cup against a Brazilian or Italian team for example would in a heartbeat bring a level of credibility to the club in the broad community that no other single event could arguably bring between now and then. Getting to the World Cup in 2014 is going to require that Canadian Soccer has a home that is a difficult and intimidating place to play for clubs coming here.

In the last round of qualifying for the 2010 World Cup that just ended, Canada played a qualifying match against Jamaica at BMO Field in August 2008. During that game for the first time organized Canadian supporters, including a large contingent of TFC supporters’ group members, decided to so something about the fact that often fans cheering for clubs outside of Canada had more fans in

the stands than those supporting their home nation. Hundreds of fans got organized and bought tickets themselves that they then distributed to supporters that they knew would be supporting the True North Strong And Free instead of in this case, Jamaica. And for the most part it worked. There were large numbers of Jamaican fans there but it was definitely a home game for Canada (as it bloody should be!!!). I personally bought twenty tickets and made sure each and every one went to someone I knew would be supporting Canada and not cheering for someone else. And I was not alone in doing so. Even now so long after the match, I think the atmosphere in the stadium that day rivalled any club match ever held there before or since. Now is the time to start building upon this trend once again.

The Canadian Soccer Association in conjunction with the Voyageurs (The Canadian National Team Supporters Group) has reserved four sections for use by Canadian Soccer Supporters ONLY at the upcoming Canada vs. Peru friendly game on September 4th. If your intention is to support Peru then please go elsewhere. If you would like to attend the match in a supporter-designated section (112, 113, 114 or in the north end in section 127), you will need to purchase your tickets via the Voyageurs in advance. The deadline is the end of July. The supporters have been given exclusive control over filling these sections with Canadian fans until the end of this month.  You can order tickets by emailing the Voyageurs at the following email address: [email protected] . Or you can go to the website of the any TFC supporters group and find out there what each of their groups is doing respectively.

It is time for TFC fans to get behind Canada and make sure that we do all we can to help them succeed! Club and Country in this case can move ahead together and the success of one definitely helps the other.