Can Tim Regan or Rick Titus Still Play For TFC? 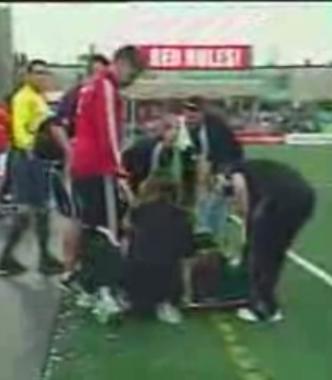 In five seasons of following this club I have missed a grand total of two games involving TFC at BMO Field. The second game was what I thought of as an overpriced and inconsequential friendly versus Real Madrid in 2009 (which I had no problem passing on) and the first was a now infamous/memorable match against Chivas USA way back in September 2008.

Back home in Newfoundland to visit my ailing Dad on that date I found myself screaming at the television because the Blue Jays game on CBC that afternoon went into the 15th inning and they only managed to join the TFC game early on in the second half. But my anger towards the CBC and towards the sport of Baseball were quickly replaced by the fury I felt when I saw the starting XI for my beloved Reds, a side that you might remember was still in with a slim chance at the MLS playoffs at the time. In retrospect I think the only thing that prevented me from ending up in a Newfoundland Hospital with a burst blood vessel in my brain that day was the slapstick medical staff at BMO Field who assigned a tiny gal to hold up a corner of a stretcher carrying big fat Zack Thornton off the field who then dropped him to the turf like the sack of spuds he was.

After pleading unsuccesfully with the league to reschedule this game because TFC had NINE starters away on International duty at the time the Reds were forced into playing a coach, a semi-pro player from Oakville, only four recognized starters and every other warm body the club could muster.  Even that was not enough to field a full eighteen man roster. The Reds only mustered fifteen that day. Yes some other MLS clubs were also short of players during that day but no one was near close to losing nine recognized starters to duty for their respective countries. Take a look at the starting Eleven and the understrength/short bench TFC fielded that day and tell me if it does not make your blood boil:

Without a doubt that day I felt anger towards MLS for what I truly felt was MLS screwing Toronto FC in a callous way that did not take into consideration any concept of fairness. Now if you will, fast forward to this week… as I have that same feeling of fury towards this League of ours rearing its head once again for what might end up being much of the same sort of scenario.

Thursday of this week saw MLS quietly announce that the game that was originally scheduled to be played between the Chicago Fire and Toronto FC at BMO Field was to be moved from a date previously announced in July, to September 12th, which happens to be the very next day after the Canadian National Team plays in Panama City in the third round of CONCACAF World Cup qualifying. There are also games involving the US and Jamacian national teams respectively on the very same day. Theoretically the Reds could be without Johnson, De Guzman, Morgan, Dunfield (and perhaps others) to name but a few for a game with a divisional opponent that might have serious playoff implications, the same way that farce against Chivas did way back in 2008…a farce by the way that the Reds lost 3-1.

Chicago you see wants to play a lucrative friendly rumoured to be against Tottenham of the English Premier League on the day that they were originally scheduled to come to Toronto to face TFC in July and the League decided in its infinite wisdon that once again its apparently okay to possibly screw TFC and to literally spit in the face of the concept of fairness, all for another stupid friendly and a bit of lucre that means absolutely nothing to the hard core fan.

Without a doubt I do not believe that the Galaxy or the Red Bulls (to name two of the more “glamour” sides in this little League of ours) would be hamstrung in such a way as the Reds will probably be on September 12th. And the reason is that the League would not do such a thing as to move a competitive match for a friendly if it meant that these clubs would all of a sudden experience some sort of competitive disadvantage.

And to make matters worse it seems that Toronto FC appears to have taken this one sitting down. Here is part of a statement announcing the schedule change that the club released today:

…”We received a request from the league to move our match. Our coaching staff was happy to accommodate the change in the schedule as July is a busy month for the team with respect to games”… (Toronto Fc 02/24/2012)

Perhaps someone should show Aron Winter how to pull up the list of FIFA dates on his phone, because milquetoast comments like this one in response to something that might at the end of the day end up having  huge consequence on the outcome of the entire undertaking this season concerns me very deeply.

Say what you will about old Trader Mo, but to his credit he did try everything he could do to try and get the Chivas game in ’08 rescheduled (unfortunately to no avail). I wonder if the club’s brain trust in charge today can say the same thing about this resheduling of the Chicago match?