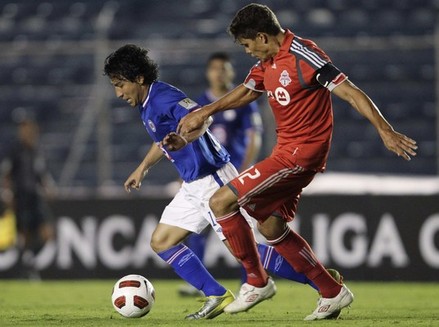 Late Wednesday afternoon Toronto FC announced vie their website that defender Adrian Cann has chosen to leave training camp and has returned to Toronto, after turning down the club’s offer on a renegotiated contract.

“We are disappointed that Adrian has decided to return home at this time…Adrian is heading into the second year of a four year contract. We are currently in discussions with the League regarding the situation and are assessing the options available to us.” Aron Winter (March 2 2011)

Not a lot to report in Winter’s statement released by the club. Last season Adrian’s guaranteed compensation was $65,342.00. And he took a pay cut to come to Toronto.

Cann’s emergence in 2010 and the strong partnership he established with Nana Attakora was one of the few bright spots on the field for TFC last season.  His fellow players chose him as club MVP in spite of of the undeniably outstanding performance of Dwayne De Rosario and his fifteen goals in 2010. He without a doubt earned the respect of his peers and of the fans of Toronto FC in 2010.

One moment stands our for me in particular when looking back on what Adrian Cann means, and may mean in the future, for Toronto FC. In the turmoil after the firings of Preki and Mo Johnston in September, TFC was still in the hunt for a spot in the knockout stages of the CONCACAF Champions League. However the daunting task of getting something away in Mexico City from powerhouse Cruz Azul was the only way to keep their slim qualification hopes alive.

With a relatively weakened lineup, a new coach, altitude/pollution to deal with, and playing their sixth game in eighteen days… on top of playing in a city where no MLS side has ever gotten a result from, the task was a huge one. Cann donned the captain’s arm band that evening and was the linchpin of what was arguably TFC’s best single defensive effort of the season as the Reds escaped with a nil nil draw and stayed alive in the Champions League. Personally I think it was the best effort of the season from the team, considering the circumstances, especially from Adrian Cann.

And now Adrian has decided to come home and essentially “hold out” for a new deal. This is an extremely alarming development for a number of reasons.

First off lets take a look at another example of a much more well known contract dispute to give this worrisome news some context. Dwayne De Rosario’s contract woes were without a doubt a huge story this off season, and to date there has been no significant word from player or club since training camp began more than a month ago on if there has been any progress on resolving the issue. Dwayne has claimed to be unhappy with his deal for months and he wants a considerable raise. (no news there!) Even in spite of this Dwayne had been part of training camp since his return from Scotland. He has not gone home. He has not held out. Adrian Cann apparently has. What this potentially says about the offer from TFC and how Adrian feels about it I think is pretty plain to see.

There is no word on how far apart the team and the player are when it comes to salary and terms. And we can only speculate on what this means when it comes to how the new regime of Winter/Mariner and De Klerk are running the club and what their relationship with the players might be. For without a doubt a good citizen to this point like Adrian Cann to leave his teammates, and leaving them in the lurch as they prepare for the season ahead, must have been a huge decision for him to take. And the fact that he took it is perhaps the most worrisome thing of all. That he left training camp and came home in order to publicly make his point that he has issues with what is being offered to him rather than staying and working on it privately  is perhaps the thing I am most concerned about.

Yesterday I wrote a piece about the relatively unsettled state of the TFC roster with just a bit over two weeks to First Kick and today we have this piece of news to digest. TFC has some money to spend. My rough calculations (and figuring out allocation dollars available is just about as hard as getting nuclear launch codes would be) gives TFC anywhere from $1.4-$1.7 million of cap space remaining to spend on players.

Adrian Cann is a decent MLS defender. He had a good season last year and in my estimation he is worthy of a raise of up to $110,000 to maybe $130,000, but due respect to him, not much more. We have no idea what was offered and what Cann feels he needs to have in order to return to the club.

I have been a noted critic of DeRo and his antics for a while now, but to the man’s credit he is not holding out. He is not flying home. He is with his new teammates working hard and getting ready for the new season. I at least will give him credit where due for that.

And on the Cann thing this is way too early to pass any significant judgments. Was this a mutual decision between TFC and Cann? Is TFC low balling him in contract talks? Is Cann being too unreasonable in his demands? Is this precursor to a trade? Does Winter even think Cann is the type of player suitable for his 4-3-3 system?

Way too many questions and far too few answers at this point folks.

More on this as the story develops.