For TFC The First Of Many Busy Days 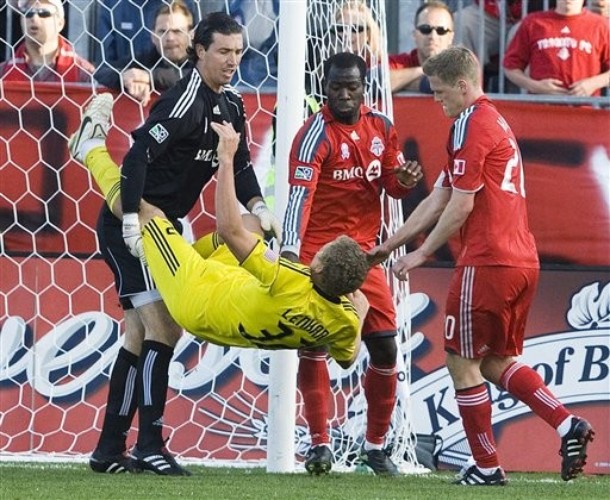 If you thought yesterday was busy just wait for tomorrow!

For Toronto FC’s new brain trust, the work on assembling TFC version 5.0 began in earnest yesterday with the trading of two players and the acquisition of four more via the MLS entry draft. And on top of all of this news is word trickling in that TFC’s captain is heading home to face the music.

And what about tomorrow may you ask? Well tomorrow is the opening of the MLS transfer window. And with the recent house cleaning and clearing of salary off the books it is becoming more than likely that the transfer window will be the primary means that Aron Winter and company are planning to use to rebuild the club the way they see fit.

I will get to that in a bit, but first a few thoughts on the comings and goings from Thursday.

With only three picks going into Thursday’s draft (and the first coming well into the second round) most TFC observers I read did not think much about the chances for anything of significant consequence coming to Toronto from the draft. And until training camp gets underway in earnest we really won’t know what we picked up. Will any of these four players be impact players in 2011 or beyond? Will they primarily be prospects in the conventional sense, plying their trade in the reserve league? Or will they be snake eyes in the crap shoot that is the later rounds of any draft?

First off one needs to remember that there is no guarantee that any of these guys will ever play for Toronto FC. Lord knows there were a lot of draft picks TFC has made that have never ever played here. They are prospects that TFC will invite to camp and if the club thinks they are worthy of keeping then they will collectively negotiate a contract/terms and go from there. Drafting anywhere out of the first round where all the Generation Adidas players are probably spoken for is a crap shoot at best in my opinion. But where the draft gets interesting for TFC is with the very last player they picked up, namely one Joao Plata. Plata is only eighteen years of age and hails from Ecuador. What makes him a unique prospect is the fact that he blew the doors off the MLS prospect combine scoring three goals in the process and turning heads with his pace and technical skills on the ball. What also makes him unique is his size (or lack thereof). He is generously listed as only five feet two inches tall. So obviously he is not the target man that a Danny Dichio was. But if he pans out he might be the kind of game breaking talent that could perhaps log some significant minutes and be perhaps an impact player. For now we will have to wait and see what he does in camp.

To get the chance to select Plata TFC traded Jon Conway to Chicago for their third round draft slot. Obviously this move was not a salary dump as Conway was on a league minimum. He ably backed up Stefan Frei last season and had some particularly strong moments in the CONCACAF Champions League group stages. He will likely be missed in the dressing room as well. This also means that Milos Kocic, who was on loan to the CSL last season is likely deemed ready by the club to take the next step to the first squad or there will be another veteran keeper coming in later. Again we will see.

The Chad Barrett news was announced during the draft as well. He was traded to the Los Angeles Galaxy for future considerations (and I think I might get “future considerations” and a big question mark personalized on a TFC jersey next season!). Without knowing how the dollars and allocation were transferred from one team to the other we will not be able to truly judge how this deal will work out for a while yet. LA picked him up because Buddle is gone and  reports are saying that Juan Pablo Angel is likely not going to play there. If reports are to be believed TFC traded Barrett for two reasons, namely the virtually insane terms of his contract given to him by Mo Johnston and that Aron Winter/Paul Mariner judged that Barrett was not going to be as good a fit with TFC as the new players they envisage signing in the upcoming days and weeks will be. Chad is on a guaranteed wage of $215,000 for the next two seasons and that is a lot of money to commit to a player that has had some good moments but has not really broken into the top rank of MLS strikers after five seasons in the league.

Good luck to both of them.

Perhaps the biggest news of the day yesterday, which is still breaking today is the fact that team captain Dwayne De Rosario’s trial with Celtic has ended and he is on his way home. DeRo posted the following on Facebook today:

Thanks to all the Celtic supporters, players & coaching staff for making my trip to Scotland pleasant & memorable. TFC has denied Celtic’s interest for a short term loan so I will be returning. Wish the Celtic club & supporters all the best for 2011. Cheers!!!

The key part of this post was where Dwayne stated that TFC had denied Celtic’s interest for a loan deal, which Aron Winter/TFC has subsequently confirmed. Taken at face value this means that there was some interest from Celtic to keep him on loan for a while yet TFC thought that it was better to have him here with his team. Simple enough.

Where this gets complicated and potentially damaging for all concerned is what happens next. Is the relationship between player and club beyond repair? Will DeRo get what he has publicly stated he wants namely more money and a DP deal? Will TFC ship him off to another MLS club and start fresh? Will his captaincy be stripped or affirmed??? Without knowing all the inside details that others claim to have about how all this went down I will reserve judgment for a while yet. What has happened has happened and the player and the club must move on from it in some way. Since DeRo went off to Glasgow Toronto FC has hired and put in place a new front office who were not there when this saga actually began. Winter, De Klerk and Mariner were not on board in December and as they are now calling the shots perhaps there is a chance for a clearing of the slate and a fresh start.

At this stage more than anything else, Dwayne De Rosario’s future in Toronto FC colours is in his hands. How he publicly deals with the questions that will be asked about this entire sordid affair when he makes himself available to answer them will for me determine if he has a future here or not. Believe the club or not they have publicly stated their position about this since the story broke. Dwayne has been silent. And upon his return I feel it is more than time for Dwayne’s silence about this issue to come to an end.

On Saturday the MLS Transfer window will open and clubs in the league can start signing players from outside the league to contracts. As I stated off the top the next week to week and a half could well see upwards of ten new players via the window. Considering that there are only fifteen senior players on the roster (and one of them, Lindsay is out for all of 2011) there will be a ton of signings on the way…sooner rather than later considering the club heads off to Turkey to bgin training camp in about a week and a half.

More, much more, to follow over the next few days.