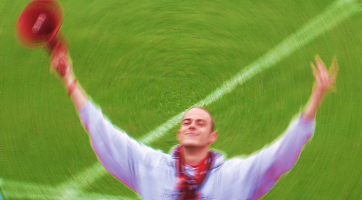 I will be posting my regular post game v-blog later this evening. Until then I wanted to make a few short observations about the game yesterday against Seattle, the upcoming match against Montreal and on some lingering fan issues:

There appears to have been no problem with the club allowing in banners and signs made by fans showing criticism for Director Of Soccer Mo Johnston. If you remember from last game, some supporters had “Anti Mo” signs confiscated on entry while other fans that did get the banners in were questioned by security upon leaving BMO Field. TFC claimed that the original confiscations and questionings were “in error” and should not have happened. To their credit there appears to have been better communication this time as a number of signs calling for Mo Johnston’s ouster were clearly visible.

Julian De Guzman played his best game in my eyes so far in a TFC uniform. Whether a defensive midfielder is the best place to spend DP dollars is a question left for another day (or if De Guzman should be playing more of a traditional box to box role for that matter instead of defensive mid), but yesterday he was solid in possession and was the catalyst he should be for all the positive play.

Martin Saric is going to become a serious liability if he keeps up the dirty play. How he got away without a straight red on his early game tackle on the Ljunberg is beyond me. Canadian fans will always cheer for a guy who sticks in and plays with an edge. Dichio for example became a TFC legend here not just for the goals but also for his hard nosed approach to playing the game. I fear that Saric plays with such overt aggressiveness as  a compensator for lack of talent.  It will be hard to cheer for a guy who always gets straight reds.

The Glorious Grass Stood Up To A Hard Day

The pitch looks like it came through the grind of a 90 minute game in the rain without any significant damage. Props are due I guess to the groundskeepers and to the company that installed the drainage and under-turf heating systems. Yesterday’s game was not a gem of a display by any means but it would have been so much worse on that horribble FieldTurf stuff.

And finally, yesterdays result  gives me some optimism going into the Voyageurs Cup game against the Montreal Impact on Wednesday. If TFC can take care of business at home and beat Montreal and Vancouver at BMO Field it will make the process of winning the tournament pretty simple. Play tight possession football like they did yesterday and we should be favoured to win.