TFC edge out the Revs

After a good road win in Philadelphia in week 1 and no game in week two it was back to business this week with the home opener against New England Revolution. The Revs have stuttered out of the gate this season drawing 1-1 in Dallas on week 1 and then losing to Columbus last week in their own home opener but its early days.

This fixture has gone the way of the home team for the last six games and you have to go back to 2015 to find an away win so hopes were high. The rumoured return of Jozy Altidore to the squad and the imminent arrival of Alejandro Pozuelo also helped buoy the mood and clear the gloom that was the Concacaf Champions League exit at the first hurdle.

Expectations took a bit of a hit in the 9th minute when referee Ted Unkel awarded a spot kick to the visitors when Mavinga felled Bunbury in the box. From the stands it looked soft, as Mavinga appeared to get a lot of the ball, but on replay you can really only argue the call if you are a diehard TFC fan !!  The Revs new designated player, Carles Gil made no mistake from the spot with a textbook penalty.  4 minutes later, youngster Ayo Akinola took a pass from Chapman about 35 yards out then worked his way into the box past 4 defenders before calmly slotting home a great goal. There will be a lot of talk about other goals in this game, but this was a thing of beauty ! Although he had made 4 substitute appearances last season, this was his first MLS start, his first MLS goal and also the first goal scored in MLS for TFC by a player born in the 2000s !!! Its well worth looking at the highlights below to watch his goal.  TFC got a well deserved equaliser at the best possible time, just before the break, and if Akinola’s goal was a thing of beauty, Hamilton’s go-ahead goal was a lesson in simplicity. Chapman crossed from the edge of the box to a waiting Hamilton who was ready to pounce inside the six yard box with a simple tap-in.  It may have been simple but it was definitely controversial as Chapman was yards offside when he received the ball that he went on to cross to Hamilton. The assistant had his flag up but the put it down and the TFC faithful were ready for VAR to cancel it out after seeing the replay on the big screen. However referee Unkel did not call it back, and the explanation appears to be that it took a touch off Delamea on the way through (which you can see on the highlights) thus playing Chapman onside. If it had happened to TFC we would be screaming bloody murder so its plain that Revs fans will not be happy.  Early in the second half we had a classic howler of a goal that drew the Revs level. An innocent ball that should have been dealt with by any of the defenders before it reached Bono who should also have been able to deal with it with his eyes closed evaded everyone and ended up in the net for what Carles Gil will probably see as one of his easiest goals ! In the words of a friend … ‘That was SO TFC !!!” 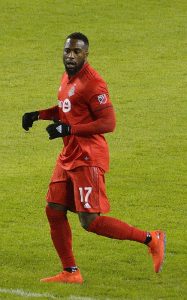 Everything up to now was just the pre-show however and in the 68th minute, Jozy Altidore’s number went up on the subs board and the BMO field crowd turned up the volume a few notches to welcome him back. Jozy has scored an awful lot of big and important goals for TFC over the years and the script was set for him to do it again … His energy in his opening moments on the pitch saw TFC get a free-kick right on the edge of the box after Akinola was tripped and with the fans wondering who would take these kicks now that Seba has gone, TFC instead tried a little trickery with a short diagonal ball to Osorio on the edge of the six yard box who almost caught the Revs napping. It didnt take long for Jozy to make his mark though … a nice run from Morrow down the left wing in the 80th minute saw him cross the ball into the centre where it was met by a rampaging Jozy running into the box and he slotted home easily for the game winner. BMO field erupted !

TFC held on for the final 10 minutes, plus 4 more minutes of added time to gain 3 important points. TFC only won back-to-back games in MLS once last season so the improvement is already showing and with Pozuelo to come in along with more – as yet unnamed – TAM and GAM and maybe even DTAM signings perhaps we can look forward to a fruitful season.

Ted Unkel : Its so easy to slaughter referees’ performances, and we have done so on many occasions over the years. In the stands before the game, the moniker “Uncle Ted” was mentioned and met with headshakes and trepidation. He has a reputation with TFC of inconsistency and bad decisions but in this game, while he may have had the odd quirk, he got three major decisions correct. The penalty for the Revs was correct. Mavinga came in from the side and behind and although he did get some of the ball it was a penalty any way you slice it.  The Hamilton goal was also correct. The touch from the Revs player put Chapman onside and the goal was legit. It would have been easy to chalk it off and TFC fans would have moaned but not gone apoplectic over it, but this was a tough call he got right. Finally, the foul on Akinola on the edge of the box where he tumbled far inside the box was indeed a foul and not a penalty. He had a split second to make that determination and got it right. So – with some degree of amazement – I have to say to ‘Uncle Ted’ …. good game !!!

Jozy Altidore : Great to see him back and although not fully fit he is looking better than he has for a while and clearly he is hungry for goals. If Jozy fires on all cylinders this season and steers clear of injury we might be smiling as much as he was at the end.

Ayo Akinola :  One (MLS) goal does not a career make, but the way he created and finished this is encouraging. He’s clearly a talented youngster with an eye for goal and we look forward to seeing more from him.

Jordan Hamilton : He’s been around as a fringe or cover player for a while now and really needs to take his chance this year or move on. There’s been speculation for years about why he doesnt get a run in the first team but if he can keep scoring goals that will certainly help. Nice to see a local boy do good

Nick DeLeon : I have a feeling that TFC fans will be putting him in the same category as the likes of Beitashour, Hasler and Morrow in terms of value for money players. He’s a workhorse and if he can stay free of injury then what a great pickup from the re-entry draft.